7 Reasons to Dump Your TV 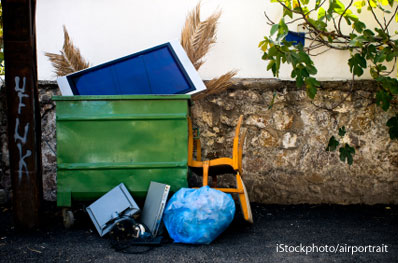 LearnVest Assistant Editor Alden Wicker explains why she decided to chuck her TV, how it’s improved her life and finances for the better, and why you should, too.

I am completely over TV. In fact, not only is TV useless, I would rank it right up there between “binge drinking on a twice-weekly basis” and “addiction to plastic surgery” on a list of habits that will ruin your finances.

And maybe your life.

Listen, I know it’s hard to conceptualize giving up “Revenge” once you’ve developed relationships with the characters. Or to conceive of what sick days would be like without the comforting routine of “Family Feud.” I’ll admit that good television has the power to educate us, teach us truths about ourselves and help us bond with co-workers over last night’s shocking plot turn.

But trust me, even though there can be benefits, you’ll still be better off without the flickering box in your life. I am. Here’s why:

Let’s start with the most obvious point.

We get so many smart, capable, successful women writing in asking for help getting their finances on track. They want to save for retirement, pay off their credit card debt or see a concert with their friends once in a while, but can’t seem to make room in their budget. Meanwhile, they’re pitching $20 (if they have roommates) to $100 toward cable TV every month.

Let’s say, starting at 25, that you cut out cable and put the money the average American spends on cable a year ($900+) into a Roth IRA with an average return of 7%. By age 65, you would have more than $190,000. Maybe you should throw in the $250 you would pay for a new TV every few years too! Clearly, cancelling your cable could start you on the road to financial health.

And let’s be real. If you are in serious credit card debt, you need to re-prioritize. Period.

2. You’re Keeping Up With Fictional Joneses

Hanging out with rich people makes our own lives seem poorer. And if you’re watching TV, you’re basically hanging out with rich people–especially if your shows of choice are “Sex and the City” re-runs, “Gossip Girl” or any of the various cities and their Housewives. It’s easy to come to believe, like Carrie Bradshaw, that Manolo Blahniks are necessary for every woman, and you may decide to make it happen for yourself with the help of your credit card. Bad news. Fictional TV characters don’t pay rent or have student loans—and they certainly never go into debt as a result of their actions.

Take this quiz to find out if you've got a case of money comparisonitis.

3. It Makes You Covet Things You Never Knew You Needed

It’s not only the shows. By age 65, the average American watches two million commercials–commercials that are designed to make your life seem dull in comparison to those of the shiny, happy people cruising around in Lexuses. U.S. companies invest $70 billion each year in television advertising and they must be getting their money’s worth. If you’ve ever found yourself craving a cheeseburger with a cold soda, perhaps you might consider removing commercials—and the craving for said cheeseburger– from your life.

4. Life Is More Fun Without TV

Talk about living her richest life. Our Senior Editor, Laura, hasn’t watched TV in 20 years, and she’s living proof that cutting TV cold turkey will improve your happiness. Since college, she’s become a certified yoga instructor, picked up Italian and become an advanced Argentine tango dancer (while also becoming proficient at salsa, merengue, ballroom and swing). She makes almost all of her presents every Christmas, cooks dinner on weeknights that she doesn’t go out, regularly attends concerts and still finds time outside of work to blog three to six times a week and dance the weekend away with friends. She can also, depending on her schedule, work her way through a book per week.

On the other hand, the average American watches 35.6 hours of television a week. That’s a full-time job!

What would you do with over 30 extra hours a week?

TV is not an inherently social activity, even if you’re watching it with someone. Sure, you’re sitting in the same room, but instead of learning about each other and really bonding, you’re exchanging quips about reality-television freakouts in between commercials.

One event that compels Laura and me to make time for TV? Sporting events. We like to watch a good World Cup match, the occasional football game or the Olympics. But because Laura and I don’t even have TVs, we need to go out to watch them. “For the World Cup, we’ll pick a bar or restaurant where there will be a big fan scene, like an Italian restaurant for an Italian game,” Laura says. This places her and her friends in the middle of a raucous crowd where they can meet people from all over the world.

And if you don’t have friends you can bring along to watch your sporting event? Well, you should be out there making some–not sitting in front of your TV.

I had a roommate who would stagger out of her room every morning, declaring, “I am so tired. I can barely function.” She was so zonked because she felt the need to catch up on at least three television shows every night, keeping her up past midnight. She’s not an exception. The average American gets a little less than seven hours of sleep on weeknights, but wishes she could get more. Just cutting one hour of TV a day is enough to make up the difference.

Sleep is essential for performing at your best at work. In fact, researchers have compared running on little sleep to being drunk. Even the wildly successful Arianna Huffington makes sleep her first priority. More success comes from more sleep … and less TV.

When I was in high school, my mom and I would settle in on weeknights to watch “Law & Order.” During that hour of gruesome crime-solving, I would almost always find myself munching on something—chips, pretzels, dessert, whatever. I felt so gross after mindlessly shoveling half a bag of processed food into my mouth, but this habit continued into adulthood, when I would take my breakfast or dinner over to the coffee table to eat in front of the news. Now that I don’t have a TV, I don’t eat mindlessly anymore, and I believe it’s one reason I’ve settled back into a healthy weight. In fact, females who watch three to four hours of TV a day have almost twice the prevalence of obesity.

Not watching TV could bring two other health benefits. First, it can give you time to cook dinner, which is good for your waistline and your wallet. Second, it may give you a long life: Sitting too much actually shortens your life span, so after a day at the office in front of the computer, the last thing you should do is fling yourself on the couch for five hours. Instead, use that time to hit the gym, take a walk or even wrestle with your dog (or toddler).

So to summarize, throwing your TV unceremoniously out the window (or donating it or trading it in) will improve your social life, whittle your waistline, give you time to learn new things, and drastically improve your finances.

I wish transforming your life were always this simple.