Barnes & Noble Nook eReader Can Be Read in the Dark 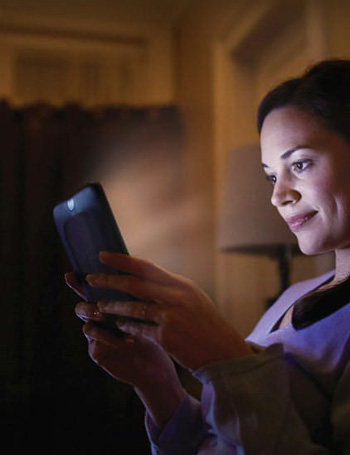 The appeal of e-ink display technology lies in the fact that it closely resembles paper, running for weeks without a charge, providing a high-contrast image that's restful on the eyes and easily standing up to direct sunlight. One of the problems has been that, like paper, it requires light to read it—the sun, a lamp, a book light.

The light strip doesn't severely impact battery life: With the light level set at 18-20% of the maximum, the battery will last a month (but that light level is probably somewhat lower than most people will use—I saw the display is a dimly-lit room and would have liked the light up higher). And there's no bulky battery to compensate. The Nook Simple Touch with GlowLight is actually 5% lighter than the existing Nook Simple Touch, both coming in under 7 ounces.

Barnes & Noble Nook Simple Touch with GlowLight gets an upgrade for beach readers as well with an anti-glare film. This film plus the light-channeling film reduce the contrast level to slightly below the 10 to 1 that of the Nook Simple Touch, but the difference is imperceptible.

You can pre-order the Barnes & Noble Nook Simple Touch with GlowLight now for $139 on BarnesandNoble.com, with availability on May 1, 2012.

I read ebooks for the

I read ebooks for the most part.  If I’m trying to learn something, then I’ll go for paper books.

Would love to capture my

Would love to capture my dog who seems to shy away from the camera.

I have bookshelves that span 12 feet wide total and are from floor almost to the ceiling filled with books. My Sony Touch has around 350 to 400 books in it. I enjoy both but the more I use my ereader the more I like it. I have converted a lot of my hardback collection to ebooks so I can take them with me everywhere.

Can, but should not, be

Can, but should not, be read in the dark, because from what I can see in the Kate Spade survival-horror matte used, they stuck a cool white LED in there so your night vision will be put out, stressing you out if you (or if your mom doesn’t call, just your mom) read in the dark.

My nook looks pitch and coke from the annotation I try to make on it anyway (burgundy sharpie roulette; stylus, uncapped, les yeux sont fait,) so maybe that would warm up the look of the pages.