Does Technology Make Us Smart or Dumb? 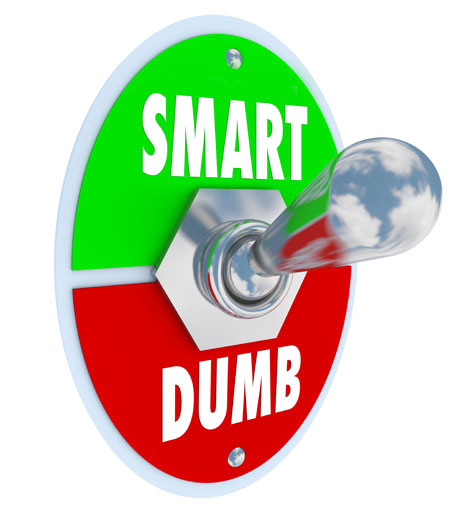 Technology aids us in every task, from commuting to work to traveling to distant worlds. It’s an astonishing set of advancements that have produced some pretty amazing results. But it’s really the everyday gadgets and gizmos that impact our personal lives the most; helping and hindering us all at the same time.

Pew Research Center reports that nearly two-thirds of Americans own a smartphone, with 19% relying on their smartphones for accessing information and staying connected to the world around them. And when it comes to researching facts on the Internet, we’re more inclined to think the best not only of the source, but of ourselves as well.

Why? Well, it turns out that just searching for answers on the Internet makes us think we’re infinitely smarter than we actually are, according to a recent article by Yale University researchers in the American Psychological Association’s Journal of Experimental Psychology: General. And since we know the Internet has all the answers, we no longer retain information like we used to. (It’s not the only study to conclude this, as years of cognitive research have shown similar results.)

However, not everyone agrees that lack of memory recall is a bad thing. “We are lucky enough to have access to information that we do not have to memorize anymore,” says Emma Moore, CEO of Fundamental, a web development and design firm. “If you are a programmer, you only need a reference of the code manual, but problem solving skills are paramount.”

Similarly, psychologist Thomas E. Boyce, Ph.D., believes a change of behavior doesn’t influence the outcome. For example, instead of reading a map when we’re lost, we simply program a GPS app in our car or on our phone. We’re still learning to perform a task with the same end result, only not in the way one might imagine. "If learning is being able to do something after being taught that could not be done before, then we are not necessarily ‘getting dumber,’ we are simply replacing one behavior with another," he says.

But shortcuts like these may not be to our benefit.

How Smart Technology Shrinks the Brain

In 2010, McGill University researchers determined that people who rely on GPS navigation had less activity in the hippocampus, an area of the brain related to memory and navigation. Conversely, people who navigate by spatial means had higher activity in the hippocampus, and even performed better on standardized tests used in the pre-diagnosis stages of Alzheimer’s disease. To combat memory loss, one McGill researcher, neuroscientist Veronique Bohbot, believes it’s best to only use GPS to find a new destination, reports Phys.org. It's best to turn it off on the way back and use your memory and spatial skills in order to preserve and possibly improve hippocampal function, according to Bohbot.

With cognitive studies like these proving that some learning styles are better than others, some tech entrepreneurs are even incorporating spatial learning into their programs. “Smart technology is definitely changing us, and some of the changes make us dumber, others smarter,” says Vladimir Babarykin in an email. Babarykin, the CEO of SpatialNote, a 3D note-taking tool that implements spatial memory into the learning and thinking process, believes that the majority of technology has a negative impact on many cognitive skills, including in the educational realm. “Electronic books and note-taking make powerful spatial mechanisms—heavily underutilized in regular books and note-taking—even less available, leading to further decrease in memorization and recall,” he says.

And some educators agree with his idea. A Pew Research Center survey of more than 2,400 middle- and high-school teachers in advanced placement and National Writing Project classrooms found that teachers (and even some students) agreed that research on computer screens is more distracting when compared to salient, extended reading in books. About 87% said that technology is creating an “easily distracted generation with short attention spans,” while 64% said smart technology is doing “more to distract students than to help them academically.”

The study lends credence to the notion that people are more distracted by viral cat videos and silly status updates than ever before. In 2000, the average American attention span was 12 seconds, according to the National Center for Biotechnology Information at the U.S. National Library of Medicine. Today, that figure has dropped to 8 seconds, thanks in part to new technology. And to make matters embarrassingly worse, the average attention span of a goldfish is 9 seconds. (Let’s hope you’re still reading this article.)

Since our attention spans are apparently shorter than that of a tiny house pet, it should be easy enough to prove that our IQs are tanking as well. King’s College London University researchers discovered that employees who multitasked, specifically dividing their attention between email and other tasks, experienced a 10-point decline in IQ, roughly the equivalent of missing a whole night’s shuteye.

But what happens if we actually don’t get any sleep due to smart tech? Here, the data gets even worse. Since we play on our smartphones while in bed, the blue light emitted from the devices actually suppresses the release of melatonin, which makes it harder for us to sleep at night. And a study funded by the Swedish Brain Research Foundation discovered that just one night of total sleep deprivation promoted the neurodegenerative processes, also known as the loss of brain tissue. Yikes.

More data: Nielsen says 83% of millenials sleep with their smartphones, compared to 50% of baby boomers. And millennials are more likely to forget things than people over the age of 55, according to a Trending Machine national survey. In the survey, millennials were found to be more likely than seniors to forget where they put their keys (14% vs. 8%), what day it is (15% vs. 7%), and even to take a bath or shower (6% vs. 2%).

“This is a population that has grown up multitasking using technology, often compounded by lack of sleep, all of which results in high levels of forgetfulness,” noted Patricia Gutentag, an occupational therapist, who commented on the Trending Machine survey.

How Technology Aids the Learning Process

While there's plenty of focus on how technology negatively impacts our cognitive abilities, technology has also made some of us smarter in unexpected ways.

For starters, there are apps that train us to limit our time on smartphones, like Moment, and smart mattresses that learn our sleep habits to help us get a better night’s rest. There are wearable fitness trackers to get us physically moving, and apps to flex our mental muscles, like Lumosity and Personal Zen. (There’s even a calculator that won’t tell you the answer until you can come up with the correct ballpark figure yourself!)

And since studies have shown that training tasks (including games like Simon and Tetris) can positively impact working memory and brain function, it seems that brainteaser apps are here to stay. (After all, the brain-health industry generated more than $1 billion in revenue in 2012, according to the American Psychological Association.) Just keep in mind that memory training is less effective over time, which researchers note is unavoidable due to reduced plasticity of brain cells as we age. So stick to reasoning and processing speed games for lasting benefits, notes the Journal of the American Geriatrics Society.

However, other studies suggest that intensive brain training has little effect on the mind. Instead, some researchers have found that you’d be better off taking a brisk walk. University of Illinois psychologist Arthur Kramer has proven that exercise improves cognitive function -- a plus for wearable fitness trackers).

And thanks to smart technology, we may even be more aware of the world around us. Teens who play video games and comment on discussion boards are more civically and politically engaged than their peers, notes Pew Research Center, adding that multi-user interfaces are great for learning cooperation, while solo game-playing increases independent thinking.

Millennials are even handling their finances themselves, reports Nielsen. They are 28% more likely than others to purchase mutual funds online, and are more comfortable than older generations to engage in online trading. (Although they’re less likely to actually contact a financial advisor.)

With all the back and forth between the potential benefits and pitfalls of technology, it seems we may never have a clear-cut conclusion. “I believe that technology is not making us dumber or smarter per se,” says Jan Kreuzer, a spokeswoman for Vanaia, a tech company that specializes in mobile productivity apps. “It is simply the extension of ourselves. It offers a better, more efficient way of achieving our goals, whatever those might be.”

In other words, technology doesn’t make us smarter or dumber; rather it’s how we choose to use it (or not) that impacts our analytical, spatial, and cultural intelligence. So, how will you use technology today?

Turn off the Internet/wifi/whatever for a week and see what happens to the world. My guess would be a strong portion of anyone under 45 couldn’t function properly and a even higher portion of 30 years and younger would simply stay inside….and 14 to 23 would simply wither up a die (just kidding)....but I do think it would have a enormous affect on people.