Nintendo began the teasingly slow process of introducing a new game console today at the E3 convention in Los Angeles, with a first look at the Wii U console, scheduled for release in 2012. As with the motion-sensing technology that made the original Wii distinctive, the focus for Wii U is once again on the controller.

This unique device sports a 6.2-inch touch-screen display, which can be used in a variety of innovative ways. Games from the Wii U console can be played either on a full-size TV or entirely on the wireless controller screen, so gamers can continue having fun without hogging the set. The controller can also serve as a separate game function display, showing a control panel for operating a tank while the gameplay continues full-screen on the TV, for example, or an overhead view of the action while the straight-on perspective is shown on the big screen.. 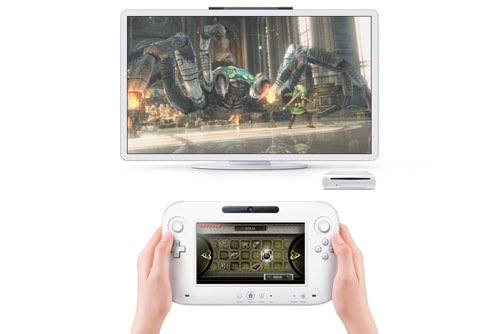 Designed to provide maximum control flexibility, there is no shortage of buttons on the Wii U controller to supplement the touch-screen, including the familiar cross-shaped control pad and A/B/X/Y cluster plus four buttons on the back. In addition, there are two analog thumbsticks, plus internal accelerometer and gyroscope to sense motion like current Wii controllers. Finally, a front-facing camera is included to allow video chat, within or outside gameplay.

A variety of interesting demonstrations of the new Wii U controller were included in the press conference. In one, the player held the controller at arm's length and used it as a shield to defend against arrows being shot by an on-screen enemy. In another, a golfer placed the controller on the floor and saw an image of the golf ball she was swinging at. In yet another, an image of a nunchuk appeared on the controller, which was held flat by the player, and the weapons were hurled at on-screen targets by swiping forward with a finger across the screen.

One more interesting wrinkle in the Wii U control scheme: the system will be backward compatible with existing Wii controllers and accessories.

Information about Nintendo software for Wii U was sparse, though plans for new games based on familiar franchises from third-party publishers were revealed, including Ninja Gaiden 3, Tekken, Batman Arkham Asylum, Assassin's Creed and Tom Clancy Ghost Recon. As expected, the Wii U steps up to high definition graphics from the Wii's standard def, and while some game screens looked slightly underwhelming, a separate demo featuring ornate birds, flowers and fish created specifically to show off the system's graphical prowess seemed to put the new system in the same league as Xbox 360 and PlayStation 3.

Of course, the most prominent missing link in all this is pricing, which was not announced. A key marketing advantage for the Nintendo Wii was the fact that it is substantially less expensive than the competition. With HD graphics and an ornate touch-screen controller, it doesn't seem likely Wii U will save consumers any money versus Microsoft and Sony's systems.

Also prominently featured at the press conference were long-awaited top-tier titles for the Nintendo 3DS handheld system. Several new games based on well-established fan favorites were demonstrated (albeit in 2D) at the press conference, including Super Mario, Luigi's Mansion 2, Mario Kart and Kid Icarus. With the exception of Kid Icarus, which has been drained of its original Nintendo Entertainment System charm, these titles had strong system-selling appeal, combining the elements that made the originals famous with appealing new content and play styles.

Nintendo 3DS fans had more good news with the release this week of the promised system update that adds a web browser and eShop for downloadable games.

As expected, there are plenty of outstanding questions to be answered between now and next year's release of Nintendo's Wii U, but the company certainly gets credit for (literally) playing to its strengths, with an innovative control scheme that should appeal both to casual and more intense players. And with the arrival of the games fans have clamored for plus online download capability, Nintendo gave the 3DS system a much-needed boost.