We’ve all spent a lot of time on Zoom calls lately, but the popular video calling platform isn’t perfect — and Facebook is offering an alternative with Messenger Rooms. This group video chat service is designed for socializing, whereas Zoom was a designed as a business tool and has gained popularity with the rest of us for its ability to create large video calls.

Messenger Rooms is designed as an easy-to-use virtual space to hang out, where people can drop in and out for however long the room is open. Up to 50 people can join and, unlike Zoom, there’s no time limit on your calls. Making a Facebook Room just takes a couple of taps from the Messenger app or Facebook itself, and you can invite anyone — including people who aren’t on Facebook — to join. Non-Facebook users only need to provide a display name to join a group, so Facebook is collecting minimal data.

We expect our video calls to be private, but security has become a major concern with Zoom. Because calls have an ID that’s easy to guess, outsiders can Zoombomb calls and join even if they weren’t invited. Zoom has started enabling password protection and putting callers in a virtual waiting room where they require approval before they join, but it adds more hoops to jump through when you just want to chat.

Facebook has its own security concerns — the service has been victim to multiple data breaches and other privacy snafus — but it also keeps access simple. When you create a room, you can invite whoever you want, like just your Facebook friends, a specific group, or specific individuals. Rooms can also start open and then be locked, so it’s easy for anyone to join but secure once you have your group together. However, you have to unlock the room to let any latecomers join, defeating the drop by feature that Facebook is touting. You can also share a link that lets people join — and unlike Zoom, the URL is made up of random characters that people can’t just guess.

Encryption among video chat apps is also spotty. While most offer basic encryption to keep your data secure, few offer end-to-end encryption, which prevents anyone — including the company hosting your call — from seeing your data. Messenger Rooms is not end-to-end encrypted, but Facebook says it’s “actively working towards this.” If you want something more secure, your options are limited. Apple’s FaceTime lets you chat with up to 32 other users for as long as you want, but is limited to people who own an Apple device. Facebook’s WhatsApp uses end-to-end encryption, but only allows video chat for up to eight people.

How to use Messenger Rooms

There’s also also a big convenience factor. Rooms can be made with just a few clicks, it’s easy to invite people (and lock your room to only the people you want to talk to), and there’s no software to download. (If you use the Facebook Messenger app, you get a few extra features like backgrounds and AR effects, but you can make and join calls from your browser.) You can start calls from the Facebook website or through the Messenger app, but they work a little differently.

On Facebook itself, it's easiest to invite your friends, groups or specific friends:

Using the Messenger app makes it easier to invite anyone: 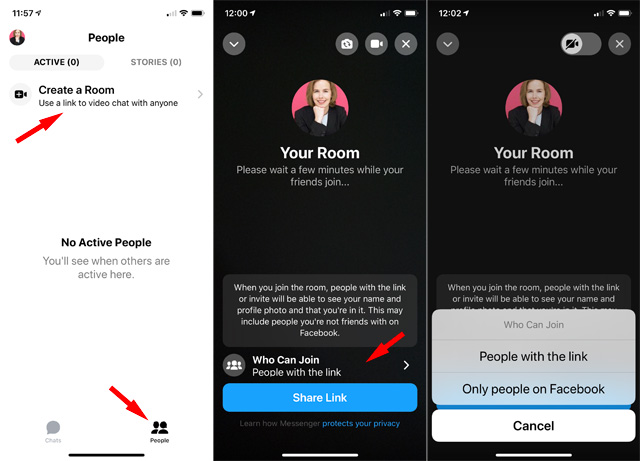 If you want to video chat, Messenger Rooms is far from your only option. Beyond Zoom, there are quite a few competing apps:

Messenger Rooms is nice, but it’s not your only option — and it won’t appeal to people who don’t trust Facebook to keep their personal data safe.

There friend I need the communication