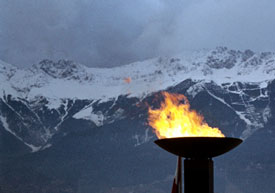 For the 2010 Vancouver Winter Olympics starting tomorrow, NBC Universal and its various networks (USA, MSNBC, CNBC and Universal HD) will be broadcasting nearly 850 hours of coverage, all in HD for the first time. The total TV coverage is more than double that of the Torino games four years ago. But not only do you not need to be in front of a TV to keep track of the games, you'll likely want to keep a laptop propped open in front of you while you're watching, to follow all the chilly action and the athletes.

Considering that Facebook was not even two years old and Twitter didn't even exist, the amount of social media coverage for this Olympics is unprecedented. Of course, many of your favorite athletes have their own Twitter feeds and Facebook pages. But here are some of the other sites to surf while staring at the skiing and skating. Who needs a TV?