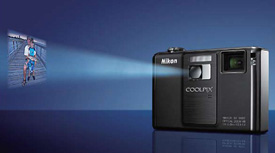 Tired of crowding around a tiny 3-inch display to show-off your latest photos? Nikon’s solved that problem with its Coolpix S1000pj—It has a built-in projector to display photos and videos you've shot with the camera.

As you might expect in a camera that measures a mere 4 by 2.5 by 0.9 inches, the projector isn’t very powerful. With a brightness rating of up to 10 lumens, you’ll need to avoid bright overhead lights and sunlight. However, it throws a DVD-quality image from up to 6.5 feet away, which results in a 40-inch image (video or still). The camera also has an adequate built-in speaker for audio playback.

My expectations were pretty low in regard to the projector when I read about the camera, so I was pleasantly surprised by the quality when I saw the camera at a recent trade show. It did quite well on a gray wall and even a somewhat wrinkled white shirt—especially at shorter throw distances. The battery in projector mode lasts one hour.

As a camera, the Coolpix S100pj packs a 12.1MP sensor, a 5x wide-angle optically stabilized lens and a 2.7-inch display. In all, it’s a very interesting camera for those that like to shoot and share. We imagine that kids,especially, will get a kick out of seeing themselves projected on-screen.

The projector in the Nikon Coolpix S1000pj does sound like fun, but I must run in a different crowd. I am looking for a first digital camera for my 10-year old and thought $150 might do as a budget. Do people really spend that kind of money on a camera for the kids? If so, I hope they have very good insurance for damage or loss.

While I’m visiting your site, perhaps you could help me out.  I loved my Nikon Coolpix 4200, which is now quite outdated with a small screen and 4 mgp. I need to replace it, having broken the battery pack cover (held together with a rubber band), and having an old, rechargeable battery that now only lasts about 30 - 40 photos before needing recharging.

I want a model that has a decent lens, negligible delay and a viewfinder (necessary for me if I am going to really get good composition and see peoples’ expressions) as well as a screen. Any thoughts on what I should look at? Will $300 get me anywhere?

No, I don’t think most people spend that type of money on a point-and-shoot for their kids. I can see kids loving the Coolpix S1000pj, though.

As for a recommendation on a replacement model for your Coolpix 4200, I’ve posted it in the forum area here.

That is an awesome looking camera. I can’t believe it will project DVD quality up to 40 inches. There are a million uses for something like this. Hopefully the price will come down a little bit, because you can get a 12.1 megapixel camera for like $200 bucks. I wonder if there’s a video out on this thing?

Sounds like a nifty little gadget, but I can’t imagine the value of such a ‘once-in-a-while’ feature matching up to the high price of this camera.