Wagz Tagz Can Keep Your Dog Off the Couch

Today’s invisible pet fences use GPS to create boundaries around your home and collars that, with training, deter dogs humanely when they approach those boundaries – no electric shocks like the invisible fences of decades ago. However, these GPS systems can’t be used anywhere that it’s hard to acquire a GPS signal, like inside your home, and they have a margin of error of ten to 15 feet. So Wagz has come out with an accessory for its GPS-based pet fence product, the Wagz Freedom Smart Dog Collar ($299.99), that aims to solve these problems, Wagz Tagz ($39.99 for one or $99.99 for three). These credit card size devices use Bluetooth to create small, more accurate virtual keep-out zones indoors. 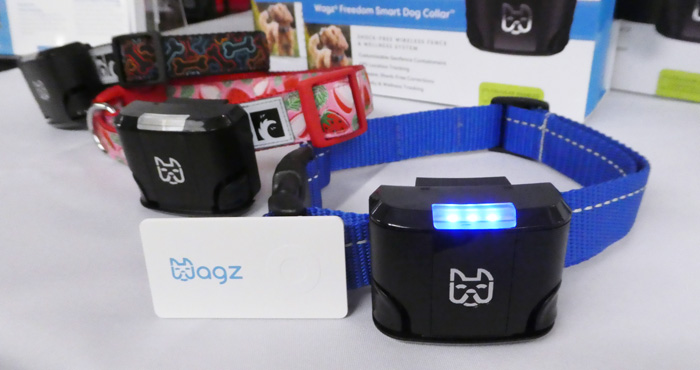 The Wagz Freedom Smart Dog Collar uses sound, vibration, and ultrasonic waves to deter your dog from entering your Tagz keep-out zones, just like it prevents your dog from exiting your GPS-based invisible fence. The Tagz measure 2.6 by 1.4 by 0.1 inches, making them easy to slip under sofa cushions or stick on a wall near the entrance to a room. In the app, you set up a keep-out zone that can be as small as one foot or as large as ten feet from the Tagz. You calibrate the Tagz by holding the Wagz collar at your dog’s height at the entrance of the deterrence zone.

I love the concept of the Wagz Tagz, but it’s expensive. You’re spending $299.99 on the collar, an additional $39.99 each on the Tagz, and you need to subscribe to the Wagz service for $9.99 per month or $99.99 per year – even if you just wanted to use the Tagz. Plus, the batteries aren’t user replaceable and have a lifespan of one year, at which point you’ll need to replace your Tagz.

Reviews of the Freedom Smart Dog Collar tend to split between very good or awful reviews based on how well the GPS works in and around a user’s home. Fortunately, Wagz has a 60-day return policy (only if you buy directly from Wagz), so you can ensure the system works for your pet and setup.