Xbox 360 Once Upon a Monster Review 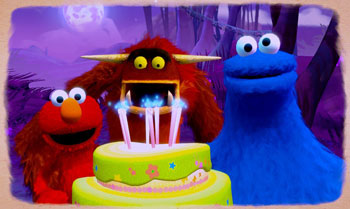 Sesame Street: Once Upon a Monster breaks new ground on a number of levels. For starters, it’s the first Xbox 360 game for pre-school kids. Secondly, it uses the Microsoft Kinect, a motion sensor and camera peripheral that attaches to the Xbox 360 console and reads the gamer’s body motion. Third, rather than being simply a series of mini-games like most Kinect titles, Sesame Street threads together a series of chapter-like vignettes to tell a cohesive story. Last, and most importantly, it all works well and it’s really fun.

The game begins with Cookie Monster and Elmo in their quest to help another monster named Marco make a really great birthday party. By jumping, leaning, raising hands, flapping arms, and other gestures, two players – ideally a parent and child – playing as Cookie and Elmo, help Marco out. Embedded in the play are lessons in cooperation, empathy, listening to instructions, and recognition of color and shape. Fortunately, the gameplay and fun take center stage, with moral and academic benefits neatly hidden. And the fact that the game keeps players on their feet and moving doesn’t hurt, either. Kids will enjoy about three hours of gameplay, with many more in replay. There's just no putting a pricetag on the value of keeping small kids engaged, so this is well worth the $46.88 on Amazon.

Great review man..waiting to get Once Upon a Monster soon