Among the hundreds of compact digital cameras on the market today, a small but growing number can “take a licking and keep on ticking,” as the folks at Timex used to say. While underwater photography is still a key selling point for these cameras, it’s far from the only compelling feature. Rugged cameras combine water resistance with dust-proofing, shock resistance and freeze-proofing. They’re at home on the beach and the ski slope. But equally interesting, you can hand one of these to your friendly neighborhood child and not worry about having slippery little fingers create dropped-and-damaged drama (though lawns and carpets are still better bets than concrete sidewalks).

The best news about this camera category is a change in size and weight over the years. Used to be, waterproof cameras were built like little battleships, larger and substantially heavier than standard compact cameras – certainly nothing you’d want to carry around for day-to-day snapshots. Manufacturers have successfully tackled this issue, though, with waterproof models like the Sony Cyber-Shot TX10 that slip easily into a pocket or purse.

When shopping for a ruggedized camera, there are a few specs to keep in mind, in addition to the usual photographic considerations. If you are planning to take the camera underwater (they make great snorkeling companions), check out the maximum rated depth. This spec varies from model to model, with some as little as 10 feet and others promising to keep moisture out down to 33 feet. If your water resistance needs are limited to the occasional splash or snowball, this spec becomes a lot less mission-critical, and lower depths usually mean higher prices. A fast lens and high ISO rating are also useful if you’re headed underwater, where light is at a premium.

When it comes to cold, the promise of usability down to 14 degrees is pretty standard – I’ve been told this is related to the limits of LCD performance. Shockproof specs vary a bit – generally the promised drop-survival range is in the 4-7 foot range. Some models also boast crush-proof construction. The Olympus Stylus Tough TG-810, for example, is supposed to withstand 220 pounds of pressure, which even a kid on his or her bicycle will be hard pressed to summon up. 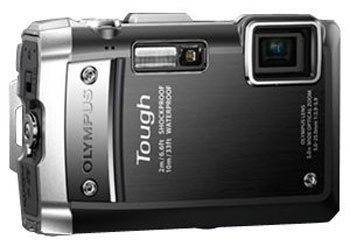 Olympus takes “tough” seriously, with a 14-megapixel camera that’s waterproof to 33 feet, can survive a six-foot drop and leads the pack in crush-proofing. The high-res screen also does an exemplary job handling glare in bright light. 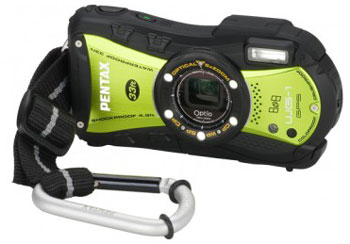 Waterproof all the way down to 33 feet, the Pentax offers three unusual features: a built-in GPS for geotagging photos, five LED lights positioned around the lens for close-up illumination of small objects, and a tough carabiner strap that attaches to your clothing for hands-free toting in challenging environments. 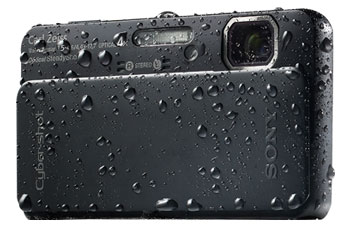 You’d never know this elegantly small camera had ruggedized cred, but it’s waterproof down to 16 feet, while shooting at 16.2 megapixels and delivering full HD video. It also boasts Sony’s cool sweep panorama mode, where pressing the shutter and panning the camera automatically stitches together an ultrawide image from multiple shots. 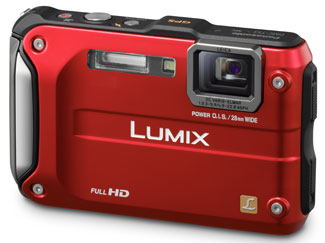 An extremely rugged 12.1-megapixel camera that’s waterproof all the way down to 40 feet, freeze-proof down to 14 degrees F, shock-proof to 6.6 feet, dust-proof – in a word, family-proof. You get a 4.6x zoom lens (28-128mm equivalent), and while there are no manual controls, Panasonic’s Intelligent AUTO system does a good job adjusting to the current shooting conditions. You get full HD video and, in a nice addition to the road-warrior TS3, a built-in GPS, so you can pinpoint the spots chronicled in photos.