Two years ago, Lenovo introduced the 10.1-inch Chromebook IdeaPad Duet, a 2-in-1 Chromebook that received rave reviews for its versatility and low price of $279 (including the keyboard case). We picked it as one of the best affordable laptops and tablets for back-to-school in 2020. This year, Lenovo launched the next generation, the 10.9-inch Chromebook IdeaPad Duet 3 ($369.99 at Lenovo). It promises to provide an even better user experience than the first-generation Duet with a larger display, a second USB-C port, and a bump in processing power.

I received a unit to review from Lenovo and was eager to see if the Duet line could maintain its reputation as one of the best budget Chromebooks. After using the Lenovo Chromebook IdeaPad Duet 3 for several weeks, I found the almost one-inch larger display and second USB-C port made a significant difference in how I use the Duet 3. On the road, the extra screen real estate makes the Duet 3 feel like a more substantial laptop and, at home, I am now able to use one USB-C port to plug in a monitor to a much bigger display, while using the second to keep the Duet 3 charged. The Chromebook Duet 3 improves on the Duet the line as a highly versatile 2-in-1 laptop for everyday computing and makes it worthy of a Techlicious Editor's Choice award.

The folio case is one of the most striking things about the Duet 3. It looks like fabric, but it's made of plastic with a non-slip grip that feels good in your hands – similar to the original Duet. The outside of the case and the keyboard are water-resistant, making spills and sticky fingerprints easy to clean up. 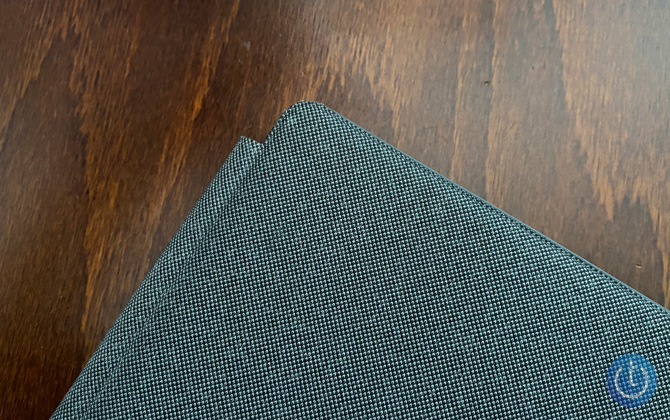 The Duet 3 case is a two-piece design – a detachable keyboard and a back cover with a built-in kickstand. Most other 2-in-1 laptops have the kickstand built into the back of the tablet, which ensures stability when you use it. For the Duet, the kickstand is built into a back cover that attaches magnetically. Unfortunately, the cover slides off fairly easily during adjustment, but once the kickstand is in the correct position (which may take a little nudging), the cover stays firmly in place. I spent hours balancing the Duet 3 on my lap on the train and never had a moment of worry that the case would come off. It feels just as secure as my Microsoft Surface with the Type Cover, which I've used while traveling for a couple of years.

The keyboard is small (though larger than the original Duet), but for my small hands there is enough room that I don’t feel cramped when typing, and the 1.4mm key travel provides satisfying tactile feedback. The trackpad is plastic, so not as responsive as glass trackpads I've used on pricier Chromebooks, but it works smoothly. The Duet 3 is compatible with the new USI 2.0 pen standard, but a pen doesn’t come in the box and no pens have come to market, yet. And, unfortunately, the Duet is not compatible with existing USI 1.0 pens. Other Chromebooks, like the HP Chromebook x2 (on sale for $419.99 on HP with 8GB RAM, 128GB storage), come with a stylus, if that's important to you.

The Duet 3’s display is a 10.9-inch Full HD (2,000 by 1,200 pixels) IPS touchscreen – almost a full inch larger than the original Duet, and the extra 0.8 inch makes a noticeable difference in usability. At just about 11 inches, it feels like a real laptop when the keyboard folio is attached, with enough screen real estate to pull up two windows. Otherwise, the Duet displays are the same. Both are IPS displays with good off-axis viewing, and both are rated at 400 nits of brightness – much higher than you’d expect on a budget laptop or even a mainstream laptop, though the same as the HP Chromebook x2.

The IdeaPad Chromebook Duet 3 has two tiny one-watt speakers. The sound is tinny and hollow, not something I’d recommend for watching movies, but adequate for video chat and casual web browsing. Unfortunately, there’s no headphone jack, so you’ll want to pack a pair of Bluetooth or USB-C headphones for serious listening. I received no complaints when I tested the built-in mic for video chats.

Lenovo has increased the resolution of the front fixed-focus camera from 2MP to 5MP, which makes it better for Zoom calls. And, the camera is able to compensate well for a range of lighting conditions. However, the image is washed out to the point where it looks like you're using a retro photo filter. Not ideal, but also not a deal killer. The rear 8MP camera is better, capable of capturing more realistic colors, but still lacks the vibrancy you’d get using a smartphone camera. In the cropped photos below, you can see the difference in color accuracy and quality. 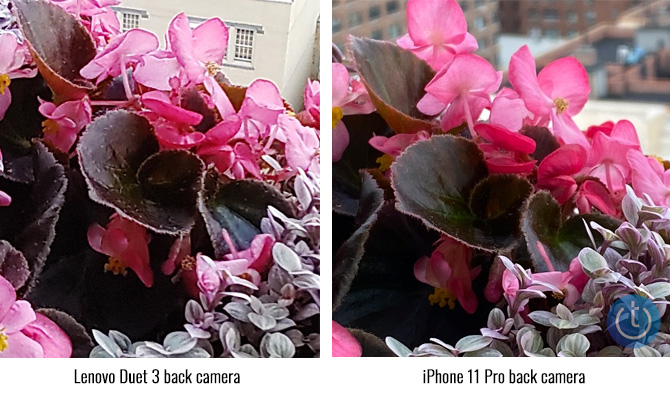 Lenovo moved from a MediaTek Helio P60T chip to a Qualcomm Snapdragon 7c Gen 2 chip, a newer and slightly faster processor. You can expect to easily perform everyday tasks, like having multiple tabs open in Chrome while sitting on a Zoom call. However, don’t expect to engage in heavy multitasking. I found the Duet 3 would lock up if I tried to run more than a few processor-intensive tasks simultaneously. Not surprisingly, the CrXPRT 2 benchmark scored it on the lower end for Chromebooks – a 60 – but that's higher than the HP Chromebook x2, which rated a 51.

The Duet 3 doesn't support the latest WiFi standards – 6 or 6E. It has WiFi 5 802.11ac (2x2), which is fine for this Chromebook because it doesn't have a 4K display and you won't be streaming 4K video and the processor isn't capable of handling high frame rate, data-intensive streaming games.

Lenovo claims up to 12 hours per charge for the Duet 3, which is average for a Chromebook. In my testing, the battery lasted all day with plenty to spare. The Duet 3 comes with a 30-watt charger in the box, but you can use a 45-watt charger for a shorter recharge – about three hours versus four hours for a full charge.

The Duet 3 has two USB-C 3.2 Gen 2 ports – the same as the HP Chromebook x2 and one more than the original Duet, which has a single USB-C 2 port. That additional USB-C port makes a huge difference in that you don’t have to choose between plugging into power and using an accessory, like an external monitor, USB-C headphones, or a mouse. And the bump from USB-C 2 to UBS-C 3.2 Gen 2 provides higher data rates and faster charging.

The Lenovo IdeaPad Chromebook Duet 3 provides excellent value for those looking for an attractive, capable 2-in-1 laptop. It’s not cut out for heavy computing or streaming, but it’s speedy enough to handle everyday tasks and small and light enough you won’t think twice about bringing it with you whenever you leave home.