Review of the Motorola Atrix 2 (AT&T)

by Josh Kirschner on January 17, 2012
in Phones and Mobile, Cell Phones, Guides & Reviews

After losing its exclusivity as the provider of the iPhone, AT&T finally started to put together a solid roundup of Android devices. The Motorola Atrix 2 is an excellent addition to that group, offering a strong feature set and performance at a reasonable price.

As the successor to the original Atrix 4G, the Atrix 2 adds a larger display, faster (potential) data speeds and more megapixels in the camera. But it retains the same processor and display resolution — this is clearly an evolutionary, not revolutionary, step forward. 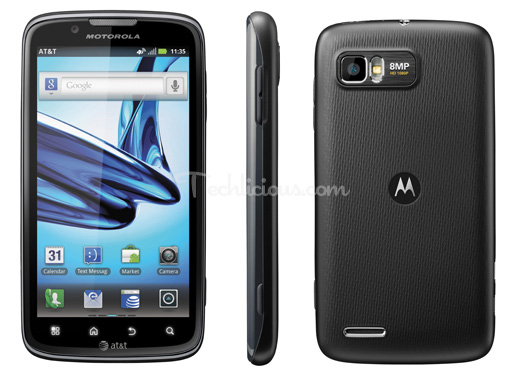 The Motorola Atrix 2 feel great in my hand, even with its 4.3" display. Like the Motorola Photon on Sprint, it has rounded edges and a textured back that make it very easy to hold. And at 5.18 ounces, the Atrix 2 is relatively light, as well.

Buttons on the side for volume control and the camera shutter are smoothly integrated into the side - great for design, not so great for actual use.

The Motorola Atrix 2 has a high-resolution 4.3" qHD (960 x 540) display covered with nearly-unbreakable Gorilla Glass. The display is larger than the original Atrix's 4" screen, but resolution remains the same. The Atrix 2 display is bright and has very good contrast. Text was also sharp. Really, a lot to like here.

The built-in speaker was plenty loud, with excellent sound quality. Call quality was very good as long as AT&T's network held up - my experience in New York City and Las Vegas was a mixed bag.

The Atrix has a mini-HDMI out or you can purchase the optional HD Multimedia Station ($99) that lets you connect up to three USB peripherals.

The Atrix 2 supports AT&T's 21.1Mbps HSPA+ networks, up from the 14.4Mbps speeds on the original Atrix. In practice, you're not going to see speeds anywhere close to those numbers on either phone. But the Atrix 2 did deliver speeds about double what we saw back in February when we tested the original Atrix. Average download speeds were in the 4Mbps range, with a peak of 8Mbps - the fastest of any AT&T phone we've tested so far.

The Atrix 2 can act as a mobile hotspot for up to five devices.

The Motorola Atrix 2 has an 8MP rear-facing camera (up from 5MP in the original) that takes average pictures for a high-end smartphone. Results were very similar to the Photon's, with accurate (if muted) colors but quite a bit of noise, even in good lighting conditions. Controls are very basic, with just a handful of scene modes and not much else. Shot times were generally slow and often out of focus. The Samsung Galaxy S II or iPhone 4S would be a better option for photo enthusiasts.

On the front there is an .3MP VGA camera.

The 1080p video on the Atrix 2 was smooth, with none of the jiggliness or stutters common in other phones, though details were unimpressive. Certainly not what you would expect from a 1080p camera.

The Motorola Atrix 2 runs Android 2.3.5 Gingerbread. Pre-installed apps are generally not obtrusive and can now, for the most part, be uninstalled (thank you!). The Atrix 2 has a mid-range 1GHz dual-core processor that provides fine performance in menus and programs.

The 4.3" display offers a well spaced keyboard, with both Swype and a multitouch keyboard built-in.

Like the Atrix and Photon, the Atrix 2 is compatible with Motorola's Lapdock 100 ($249.99). The Lapdock is essentially a laptop display and keyboard that comes to life when you plug-in your phone. It works acceptably for browsing the web and editing files, but still seems like a bizarre solution to a problem that is more effectively solved with a tablet or small laptop.

The Motorola Atrix 2 comes with 8GB of onboard storage and a 2GB SD card, expandable to 32 GB.

The Motorola Atrix 2 delivered very good battery life. With moderate usage, it would easily last more than 24 hours, and more than 48 with light use.

The Motorola Atrix 2 is available for $99.99 from AT&T with a new, two-year customer agreement. Or you can pick it up from Amazon Wireless

The Motorola Atrix 2 is a solid phone at a very reasonable price. I've been using it regularly for over a month and have been very pleased with it. Data speeds are the best I've measured on AT&T, the display is very attractive, it is comfortable to hold and battery life was excellent (for a smartphone).

If you find a 4.3" display too large or are looking to save some money (or both), the original Atrix 4G offers most of what you find on the Atrix 2 for $70 less. And if photo quality is very important to you, the Samsung Galaxy S II ($149) or iPhone 4S (starting at $199) will deliver better results.

Overall, I highly recommend the Atrix 2. For AT&T customers, it should definitely be on your short list.