by Suzanne Kantra on September 30, 2011
in Phones and Mobile, Cell Phones, Guides & Reviews

The Motorola Droid Bionic is one of the best Android phones Verizon has in its lineup right now. It's blazingly fast with a 1GHz dual core processor, 1GB of RAM and access to Verizon's 4G LTE network. It's capable of taking 1080p HD videos. Plus it's a well-made, attractive phone, with nice metallic accents and a soft-touch finish, that fits nicely in your hand, despite its 4.3-inch display. This is a big advantage over cheap, plasticy feel of its main competition, the Samsung Droid Charge.

The Droid Bionic's disappointment is its still camera, where the Droid Charge excels. It's almost impossible to take a blur-free photo with the Droid Bionic in low-light situations and autofocus takes forever.

So it comes down to whether the camera is important to you. If it is, you'd be better off with the Samsung Droid Charge. If not, you'll be happy with the Motorola Droid Bionic. 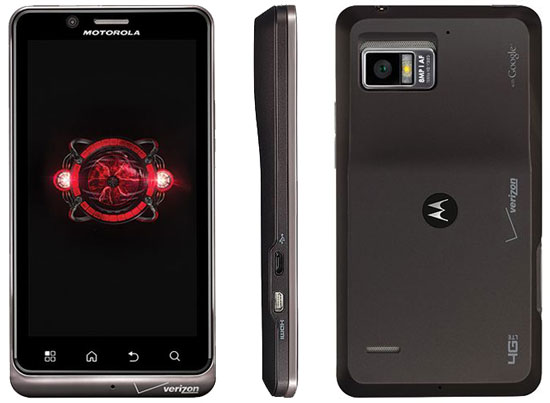 Weighing in at 5.6 ounces and with a 4.3-inch display, the Motorola Droid Bionic is one of the larger Android phones on the market. Yet, it feels good in my relatively small hand. Some of that is due to the velvety soft finish on the back of the device, which provides a great grip.

The volume rocker on the top left side is easy to access.

The Motorola Droid Bionic has a relatively large 4.3-inch qHD display (960 x 540). There's nothing special about the display, but it's decent. And it's protected with Gorilla Glass, which makes it virtually scratch-proof.

The built-in speaker on the Motorola Droid Bionic was pretty good for a phone, easily providing enough volume for my office space. Standard calling volume was good as well.

The Motorola Droid Bionic is a 4G phone, and blazingly fast. Similar to the Samsung Droid Charge and HTC Thunderbolt, I regularly got download speeds of 17-22 Mbps, and upload speeds from 5 - 7 Mbps in New York City (see: The Fastest 4G? It's No Contest for an idea of how much you get with a 4G versus a 3G phone).

With the Motorola Droid Bionic's large display, snappy processor and speedy network, web browsing was a pleasure. And with Flash 10.3, there weren't any compatibility problems.

The Motorola Droid Bionic can act as a mobile hotspot for up to 5 devices.

The Motorola Droid Bionic has a 8MP rear-facing camera that disappoints. It takes a long time for the camera to focus, even is bright light, which means in low light situations it's almost impossible to get a blur-free shot. The colors in the photos were somewhat washed out, though, those photos that were in focus did have a decent level of detail.

Video quality was much better. First, it takes video in 1080p HD, which means it looks great when you output it to an HD display through the phone's dedicated HDMI port. And while there is still the washed out color problem and a little of the stutter common to cell phone video, overall the quality was above average.

There is VGA front-facing camera for video chat.

The Motorola Droid Bionic is running Android 2.3 Gingerbread and MOTOBLUR, both of which I am a fan of. MOTOBLUR has a great selection of resizable widgets, though it would have been nice to have 7 screens instead of its 5.

With its fast processor, navigation was smooth and apps loaded quickly. You can choose between multi-touch text input and Swype, my favorite.

The Motorola Droid Bionic has an included 16GB and 16GB of onboard memory.

Battery life on the Motorola Droid Bionic was average for a 4G phone running on the LTE network, which means it barely lasted through a 9 to 5 work day. If I kept the 4G network off except when absoultely necessary, it lasted through the day.

The laptop dock is 2.4 pounds, which puts it in the range of a MacBook Air or small netbook—not bad for traveling. But take out the phone and it's just a dead weight. And though it has a full Mozilla browser, you won't be able to load PC programs such as Office. I was also disappointed that the mouse pad is not multi-touch, nor can you double tap to open applications.

The Laptop Dock also doesn't come cheap. At $289.99, it's expensive, as much as some netbooks, and is only compatible with the Droid Bionic.

The Motorola Droid Bionic is available from Amazon Wireless

I really like the Motorola Droid Bionic. It's super fast and it looks and feels great in my hand. My one hang-up is the camera. The lag when taking photos is really annoying and it would be nice to capture unblurry low-light photos. But I don't take a lot of photos with my phone, so its benefits outweigh the mediocre camera. That's a choice you'll need to make for yourself, though.

DROID BIONIC 8GB ONBOARD ???, Advertised as 16gb on board. Only has 8. Major issue I think. What kind of quality control has this device been through when they don’t realize it has have the internal memory as advertised.