The Truth about 2D to 3DTV Conversion 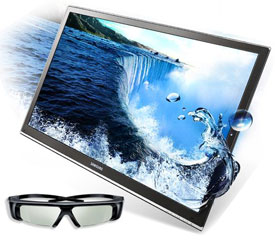 Many of the new 3DTVs can take regular TV programming and convert it to 3D. How well does the resulting 3D content look? I was invited to a screening on Saturday to check it out.

I've seen demos of 2D to 3D conversion before, but they were was always put together by the 3DTV manufacturers who, naturally, only pick the best stuff. This time the demo was put n by an independent research firm and included a wide variety of cable and iTunes content—a basketball game, American Idol, iCarly, The Office, The Daily Show, Phineas and Ferb—and a DVD of the latest Transformers movie. The TV was Samsung's top-of-the-line 55-inch UN55C9000, which retails for $7,000.

The results were definitely mixed.

Not surprisingly most of the programming had more of a sense of depth, which definitely added a sense of immersion. On the downside, there were a few weird effects that cropped up. Anything flat—a logo, a picture-in-picture window, a graphic showing a person's title—floats artificially near the front of the screen. There were also times when the TV wouldn't get the 3D right. An arm or leg belonging to one basketball player would seem to sprout from another. Ultimately, I found only certain types of programming benefited from conversion.

Cartoon: The 3D effect was almost non-existent when watching Phineas and Ferb, and certainly not worth sporting the 3D glasses. Since this cartoon is fairly flat, it is possible that something that usually appears more 3D, like Mickey Mouse Club House, would provide a better result.

Sitcom/Drama: I could definitely see the 3D effect, but it didn’t add to the overall impact of the programming. I’d pass on 3D for this.

Concert/Live Entertainment: 3D makes sense for this type of programming. I really felt that I was there in the audience watching the American Idol performance.

Sports: The TV seemed to have difficulty with the fast-action of a basketball game. I saw a lot more artifacts—limbs associated with the wrong player—and the quick cuts and splash graphics were unpleasant to watch. If shot with fewer cuts and for slower games, like golf, sports would look good.

Movie: I watched the portion of Transformers where the Decepticons were conducting a search. The 3D effect really heightened the suspense and drew me in. I’d definitely give action/suspense movies a try.

News/Talk Show: Jon Stewart and his set looked great in 3D, but it was hard to get past the floating picture-in-picture videos. I can see this being an issue with news programming as well. For me it wasn’t worth it.

It’s not as spectacular as full 3d.  While you get a sense of depth, nothing comes out of the screen.  I didn’t have a problem with arms or legs of one player belonging to another, and for sports it’s actually better and “less distracting” than sports in full 3d.  Frankly, I think the engineers who created 2d to 3d were told to make it substandard to full 3d, else how could they sell 3d movies or attract viewers to full 3d programming?

I fully agree with the previous review. It is a market issue. But this can be changed from the washing of hands with one of the engineers look forward to that one of the engineers in the area is fired we will very soon get the standard 2D to 3D in full HD as standard in 3D Full HD TVs Standard. I say this because there is an enormous amount of material 3D TVs in stock from Bray, DVDs, videos etc.. And this came about because there is a big problem between necessity and luxury these days. There are doors of warehouses of large companies are produced massive amounts of material that does not drain perhaps derived from the exorbitant cost and inaccessible before the atrocities of market fluctuation and the advancement of new technologies. GO get stacked if not lower the PRICE and how. Because the market is already above the new HD with resolutions above 3840x2160 (can go up to 7680 × 4320 (33.2 megapixels) 8K) over 16x more superior then current HD. Ie Toshiba, LG Already makes the ‘4 K ‘television (Super HD since the commercialization), and several Other manufacturers look set to follow suit at the Consumer Electronics Show this week.

which one to buy

However it converts without pop-ups but its amazing technology