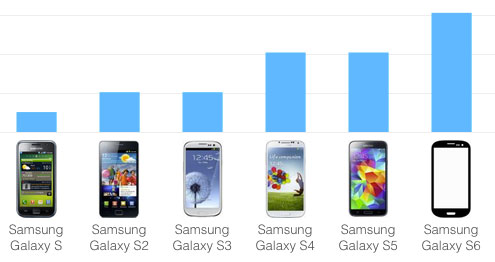 With Samsung’s Galaxy S6 officially announced, we've rounded up as many specs as we could find. The early verdict? The S6 is an absolute beast, and likely a huge step forward compared to last year’s S5. For context, we charted the full Galaxy S line—from the 2010 Galaxy S to the upcoming S6—on five key attributes. Let’s run down what we know so far in five charts.

For Once, The Same Screen Size As Last Time

You could set your smartwatch to the Galaxy S’s annual screen size bump, a trend that’s part marketing gimmick, part changing consumer taste. This year, however, the S6 will maintain the 5.1-inch screen size of the previous Galaxy S—a first for Samsung. With all the other changes, consistency helps.

There’s nothing Samsung loves more than specs, but last year, the Galaxy S5’s pixel density was actually lower than its predecessor. Never mind that the display looked just as good, or that the decrease made perfect sense given the increased screen size. The lower number only added to the prevailing narrative: Samsung had mailed in the Galaxy S5. Swipe ahead to this year, and Samsung has made no compromises. Compared to the S5, the S6’s display will be much, much sharper, at an astonishing 577 pixels per inch. That translates to nearly double the total pixels of the S5 (3.7 vs. 2 million).

RAM is the unsung hero of the smartphone. Lots of RAM means smooth multi-tasking; low RAM means that your games, apps and web pages will often have to reload every time you switch back and forth. Here, the S6 will offer three gigabytes of RAM, matching SpecOut's 2014 Editors’ Choice (the LG G3) and tripling the RAM in an iPhone 6.

What about hardware? Samsung may deliver top-tier specs every year, but physical design has been a mixed bag for the company, with medium-to-bulky form factors and cheap, plastic backs. We already know that Samsung is abandoning the plastic shell, but the S6’s thin, sleek profile is the sneakier, craftier enhancement. Measuring just 6.8 millimeters thick, the S6 is poised to become the second-thinnest flagship smartphone in America (behind just the 6.7-mm iPhone). That’s big for Samsung.

We’re not surprised to see the S6’s primary camera breaking at 16 megapixels (MPs). Pro photographers will likely roll their eyes at the inflated statistic, but you can bet Samsung will plaster the number across banner ads and TV commercials. Instead, the more interesting spec here is the front camera, which is used for things like selfies, Skypes and Snapchats. Outside of HTC, few of the top smartphone makers have taken the front camera seriously, but the S6’s MP-boost suggests that Samsung wants the handset’s photos to sing, regardless of which side of the device is used. We won’t have the final word on the S6’s camera quality until we’ve had a chance to test it out, but for now, it seems that the S6 is serious about snapshots.

For reference, see how the S6 stacks up against its closest competitors below. The HTC One M9 and LG G4 are likely only a few months away, but until then, the S6 looks like the phone to beat.

How the S6 Stacks Up to Top Competitors | SpecOut