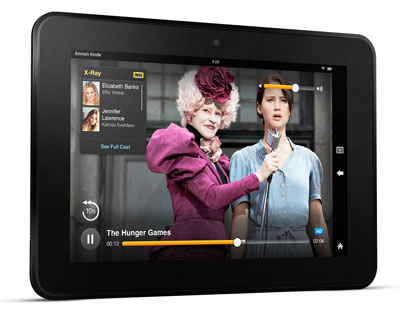 In a product category dominated by the iPad, Amazon made inroads with its first generation tablet, the Kindle Fire, accounting for as much as 14% of U.S. tablet sales, according to IHS iSuppli. Today, Amazon raises the bar with four new Android-based tablets—two larger 8.9-inch HD models and two 7-inch models, one HD and one upgraded replacement for the original Kindle Fire. Plus, there are interesting software upgrades that go across all models.

In terms of processors, the Fire HD 8.9”model’s 1.5Ghz dual-core processor is comparable to the iPad’s and both have dedicated graphics processors.

The Fire HD 8.9” models get the nod with stereo speakers and an HD front-facing camera, versus the iPad’s mono speaker and standard definition camera. There is no backward-facing camera, though, and the iPad sports a 5MP camera.

There’s also an interesting data option for the 4G LTE model. For Just $50 for the year, you get 250MB of data per month. That may not seem like a lot, but most people will use Wi-Fi predominantly for their data. And ,when you compare it to the iPad, you’d be playing $14.99 for that same 250MB per month on AT&T or you’d have to pay a minimum of $20 per month on Verizon, though you’d get 1GB every month.

Of course, the conversation always circles back to apps and while there are now plenty of Kindle Fire apps, there’s no denying that iPad still has the lead there. On the entertainment side, though, the advantage goes to Amazon’s Kindle Fire products. The Amazon apps are available on a much wider range of products, making it possible to buy once and enjoy your video, music, books and games on TVs, tablets (including iPad), smartphones, game systems and computers.

Amazon builds upon that advantage with a suite of Whispersync services that make it possible to pick up where you left off—whether that’s reading a book, watching a movie or playing a game. 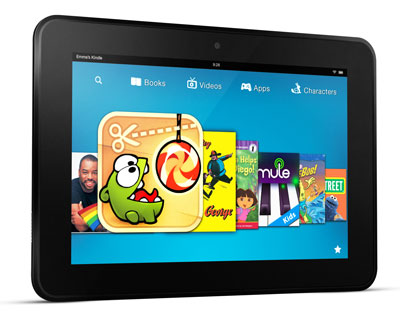 The FreeTime service lets you choose which apps show up for your child.

One other advantage, all the Kindle Fire products will support multiple profiles. Using a service called FreeTime, you’ll be able to choose the apps, books, games and videos that will appear for each user. Plus, you can set usage limits by activity. So you could let your child could read all day long, but games and videos could be capped at an hour.

All models are available for pre-order. The Kindle Fire

are expected to ship on November 20.

To my great shock, I’m reading everywhere that every one of the new Kindles is now “ad supported,” with no way out, no way to pay to get rid of this feature and, most amazingly, NO DISCUSSION of this during that press conference.

I won’t buy a fake tablet with no extensibility AND with ads. The higher level, larger Fire HDs cost as much as real tablets such as the Samsung Note 10.1 or lower cost/high quality low profile winners like Le Pan 2, which is a real sleeper in the tablet market.

I’ve been a big Amazon booster for years. This has become a real watershed moment for me. Along with a sneak attack on Prime membership (they’ve been lengthening the actual delivery time of so-called Free 2-day shipping to six days or more), this is a giant red flag: Amazon is becoming a different company with different values. Buyer beware.

"It pays NOT to advertise"

FROM THE AMAZON SITE:
You’ll receive special offers and sponsored screensavers directly on your Kindle Fire HD. Examples of special offers and sponsored screensavers include:
Movie posters, music covers, and book covers for upcoming titles
Deals on digital content, for example: 1 of 10 top-rated Kindle books for $1, or $5 to spend in the Amazon MP3 Store
Deals on consumer electronics, for example: save up to $500 on select HDTVs
Your offers display on the lock screen and lower left hand corner of the home screen—they don’t interrupt use of the device. If you would like to opt out of these special offers, you can do so through Manage Your Kindle for $15 after you have registered your device.

As Always you have really covered the thing s that are most important to me as a consumer. I have been thinking of buying a tablet and had almost decided which one when this new one came out. The really made me feel good about the choice I had made.

No one has addressed how much it will cost if you go over the 250mb; how much is the additional 3GB and 5GB data plans from AT&T & what if I am not on AT&T; how much does it cost the second year; does the camera only work for skype or will it take pictures; what is the battery life of the 4G version. Until I get answers to these very important questions I won’t even consider it!

Why do reviewers always assume we’re only interested in watching movies, taking pictures, playing games, and listening to music?

I’ve lugged a laptop for a lot of years and would love to see how a tablet might supplement (or ulitmately replace) my laptop. I suspect that has more to do with software/aps and storage space than screen size and resolution.

One of the still unanswered questions is whether or not Amazon’s products are tablets/tools or are they just a glorified entertainment device.

Ok, I’m a newbie.  So here’s a possible dumb question.  Can I get Internet for Kindle Fire or Google Nexus and use it through my AT &T phone plan?  I don’t want to have to pay extra.  Also, how would you compare Kindle Fire vs. Google Nexus?  I want these to read books, articles, tutorials, and get on Internet, without the price tag of an iPad. I hope you answer my question! Thanks…

To use a Kindle Fire

To use a Kindle Fire or Google Nexus on AT&T you’ll have to pay a data fee.

For Google Nexus, there are no special plans. You’ll pay $14.99 per month for 250MB of data or $10 per month to access your mobile share plan.

The Kindle Fire is an Android tablet, but it’s set up to access content provided by Amazon. So you’ll have a subset of the apps available to Android devices. On the other hand, it’s really easy to use and provides plenty of functionality for a regular users.

The Google Nexus gives you more flexibility, and gets all of the latest software bells and whistles, but is not quite as easy to use.