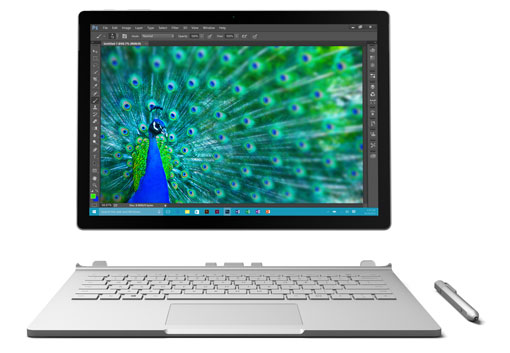 When Microsoft representatives appeared on stage for the company’s Windows 10 event in New York City, it was expected they’d reveal the latest version of its last big win, the two-in-one tablet/laptop, the Surface Pro 3.  But Microsoft surprised us with a powerful and gorgeous laptop, the Surface Book. And, it could very well be the product that changes your perception of Microsoft.

The Surface Book isn’t radical looking—other than a curved, spiny-looking hinge that attaches the 13.5-inch touch-screen display to its full-size keyboard. It’s the fact that this thin-and-light object of beauty packs in more power and functionality than Apple’s MacBooks, the laptops that other computer makers are constantly measuring themselves against. 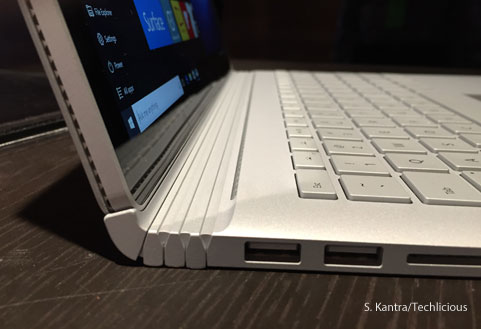 For starters, the device is both a laptop and a tablet. The hinge attaching the two parts extends and contracts, allowing users to adjust the display’s viewing angle. It also shifts the center of gravity so it doesn’t feel top-heavy—even on your lap. And with the press of a button, the screen quickly detaches from the base, becoming a full Windows 10 tablet. (A light on the separation key lets you know that the top is ready to detach, so you don’t have to worry about accidently pulling them apart.)

Since the display half of the Surface Book needs to function as a full PC, everything but the dedicated NVIDIA graphics processor, which is optional, and some additional batteries are contained within the screen. (When separated the Intel processor handles graphics operations.)  The display has an eye-popping 6 million pixels (3000 by 2000 pixels with 267 ppi), which is more than the 13.3-inch MacBook Pro’s 4-million pixel Retina display (2560 by 1600 pixels with 227 ppi), for super-crisp images. Plus the display supports 5-point multi-touch and works with a stylus.

The Surface Book gets a new stylus, the Surface Pen. In addition to 1,024 levels of pressure sensitivity meant to make on-screen writing feel natural, the pen comes with a tail eraser. The pen attaches to the side of the Surface Book via magnet for storage. The Surface Pen comes in five colors as well as options of interchangeable pen tips that are likened to real-life when you’re writing with a felt tip versus a ball-point.

During the introduction of the Surface Book, the head of  Microsoft’s Surface team, Panos Panay, isn’t shy about claiming the user experience of the device to be “best in class,” citing the device’s ease of key strokes, backlit keys, stability and overall quietness . He says matter-of-factly, that Surface Book is “ounce for ounce the fastest 13-inch laptop ever made.” It’s two times faster than Apple’s MacBook Pro, he adds. The top of the line Surface Book is powered by a 6th generation Intel Core i7 processor with 16GB of RAM and NVIDIA GeForce graphics. The MacBook Pro top model uses a 5th generation Intel Core i7 processor, 16GM RAM and AMD Radeon graphics.

You can pre-order the Surface Book today, starting at $1,499 on Microsoft.com and Amazon. Orders will be shipped on October 26th. 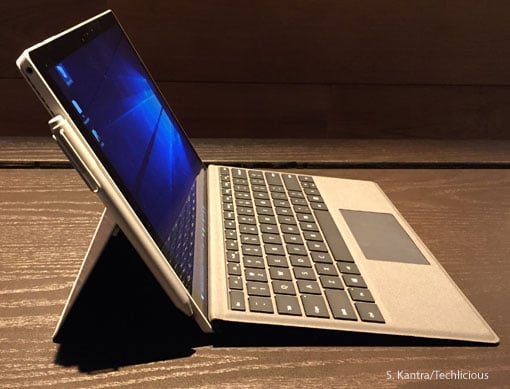 The Surface Pro 4, the product we expected to see, didn’t hold many surprises. Visually, it appears fairly similar to the Surface Pro 3, though even thinner at 8.4mm. And, it’s 30 percent more powerful and runs 50 percent faster than Apple’s MacBook Air, according to Microsoft.

The actual screen area increases from 12 inches to 12.3 inches in the diagonal, without changing the overall size. It has a full-size keyboard with a fingerprint sensor for logging in, and the 5-point multi-touch display is protected by Gorilla Glass (GG4), for protection and more natural movement across the screen, according to Microsoft.  The five million pixel display (2763 by 1824 with 267 ppi) matches the quality of the Surface Book.

Surface Pro 4 also gets the new Surface Pen and there’s an optional docking station (which also works with the SP3) that has four USB 3.0 ports and two 4K Display Ports.

Configurations start at $899 for a model with a Core m3 processor, 4GB of RAM and 128 of storage and go up to a Core i7 processor, 16GB RAM and 512GB of storage. Pre-orders are being taken now on Microsoft.com and Amazon, with shipments starting October 26th.

Excellent article. I would probably have ignored the Surface Book if I hadn’t read this.