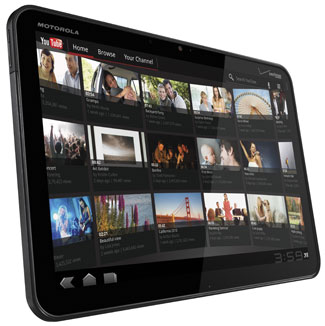 This is the year of the Android tablet and leading the pack is Motorola’s Xoom. It will be the first tablet to run Android 3.0 Honeycomb, the version of Android built specifically for tablets.

The details on Honeycomb are still light, but we know that the user experience has been improved for features such as widgets, multi-tasking and browsing. And we saw some of those improvement during our demo of the Motorola Xoom.

The Xoom browser supports multiple tabs, videos in the browser window and incognito mode, which hides your browsing history. Google Books comes standard, and your picks from its library of 3 million books is synced to your Google account. Google Maps also gets an update with enhanced gesture control and faster rendering, thanks to the Xoom's fast processor.

Speaking of the processor, the Xoom’s is best in class, an NVIDIA Tegra 2 dual-core processor running at 1 GHz. It has 1GB of RAM and 32GB of onboard storage, plus microSD support for up to an additional 32GB.

Rounding out the package. the Xoom has a front-facing 2MP camera for video chats over Wi-Fi or 3G/4G LTE, as well as a rear-facing 5MP camera that captures video in 720p HD. It features a built-in gyroscope, e-compass, accelerometer and adaptive lighting for new types of applications. And in a first for a tablet, the Xoom will have a barometer—that should make for some pretty cool weather apps!

The Motorola Xoom will launch as a 3G/Wi-Fi-enabled device within the next three months, with an upgrade to 4G LTE by this summer. It will feature mobile hotspot capability with connections for up to five other devices. Pricing has not been set.

With all of these features and a weight of 1.6 lbs, the Motorola Xoom is the CES front-runner for the title of "iPad Killer".

I’m very curious as well.  Most of the Android tablets have been cheaper because, frankly, they were pretty cheaply made (Samsung Galaxy Tab excluded).  The Xoom is one heck of a device spec-wise, and it felt pretty solid during the brief time I held it at CES, so I doubt it will be bargain priced.

The fact that it will launch on Verizon’s CDMA network may not be a big factor since the plan is to upgrade it to 4G (LTE) in the summer.  For those in LTE areas, that will put the Xoom well ahead of the iPad for streaming unless the new iPad also upgrades to 4G.

BGR may be getting better AT&T service in Northern NJ, but in Manhattan, not so much (around 800kbps as I write this). And Manhattan makes AT&T look great compared to the AT&T service we got in Las Vegas last week at CES.  You would think someone in AT&T marketing/PR would have realized that beefing up the cell towers in Las Vegas might have been a good idea given that every tech journalist in the free world was going to be there!

But your point is well taken. Consider how strong each carrier is in YOUR location, not where the tech journalists are based, when making a tablet or cell phone purchase.

2011 is definitely the year

2011 is definitely the year of the tablets. I believe the Xoom won the Best of Show award at CES 2011 which is quite impressive. I have been following Notion Ink’s Adam tablet for some time now which I think is more powerful and has better specs than the Xoom… Did you happen to see it at CES?

I’ll also admit that the

I’ll also admit that the Xoom seems pretty impressive spec-wise. It will be interesting to see what Motorola comes out with accessory wise. Thus far, I’ve only heard about the stocking dock, various portfolio cases, wireless keyboard that I believe has Bluetooth functionality. I think that’s really the litmus test to how serious Motorola really is with competing with the iPad. Cost-wise, I heard rumors that the basic version will be priced between $250 and $299. Has anyone heard the same? If so, that’s definitely bargain pricing considering that the iPad is currently selling for $499 and iPad2 is supposedly going to be introduced at $599.

I also agree that xoom

I also agree that xoom tablet is the gadget to beat this 2011. It has the greatest features that a android has!

Google wants to destroy it’s competitors, from search engines, social media (Google Plus will fight with Facebook), operating systems on tablets (Apple), microblogging, blogging and god knows when they will stop…