The Adidas miCoach SMART RUN is a Serious Running Watch 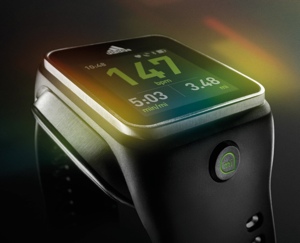 Recently, I did a little bit of fawning over the Fitbit Force, the new activity-tracking smartwatch from the makers of the top-rated Flex. It’s a great device for those who’d like encouragement to be a little bit more active. But if you’re a serious runner in training, a high-tech pedometer like the Force isn’t going to satisfy your more demanding needs.

That’s where the Adidas miCoach SMART RUN running watch comes in. Like the Moto Actv, the SMART RUN has a built-in GPS for tracking your runs, MP3-playing functionality and Bluetooth 4.0 connectivity so you can pair it with a set of wireless Bluetooth headphones. But while the Actv requires you to use the Motorola SF700 BT headphones to monitor your heart rate, this sports watch does it directly from your arm.

At the heart of the SMART RUN is Adidas’s miCoach interactive interval training feature. Says Adidas, “Guidance comes in various forms including vibration, through the 1.45-inch color touch screen display and, if you are using a Bluetooth headset, the coach will tell you to speed up or slow down.” The device also comes with “more than 400 anatomically correct animations” to help with your exercise plan, which can be discretely checked while at the gym. (Go ahead, I won’t tattle – I do it too.)

At $399, the SMART RUN is a bit pricey considering that a smartphone with the RunKeeper app can do much the same thing when paired with a heart-rate monitor (like the $199 Mio Alpha). But if you’re serious about running and don’t want a bulky phone on you at all times, this running watch may be a luxury that's worth the price.

The Adidas miCoach SMART RUN will be available starting November 1 at adidas.com. To learn more about the miCoach service, visit micoach.com.