The Best 3D Camcorders at CES

by Steve Morgenstern on January 13, 2011
in Cameras and Photography, News, Camcorders, 3DTV :: 2 comments 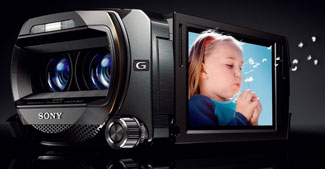 With 3D video content still sparse, consumers are being encouraged to paint family members blue and create their own Avatar using a flock of new high-definition 3D camcorders. Or at least that's the impression I got at CES this year. 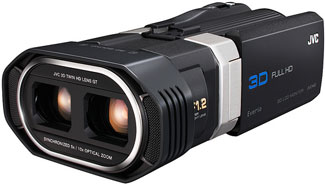 Sony and JVC each announced high-end consumer 3D camcorders–the JVC GS-TD1 and Sony HDR-T10–that are more alike than different. Both use two lenses and two sensors to produce Full HD 1920 x 1080 video in 3D. They both have 3.5-inch LCDs that show the 3D effect while shooting, without requiring special glasses. Both have 64 gigabytes of built-in memory, and accept SD/SDHC/SDXC memory cards (the Sony also accepts Sony’s proprietary Memory Stick PRO Duo memory, to no one’s great surprise).

These camcorders offer higher resolution than the first high-end consumer 3D camcorder, Panasonic’s HDC-SDT750, which uses a single sensor to deliver 960x1080 resolution. Another key difference: the Panasonic system uses a screw-on conversion lens which doesn’t allow you to zoom while shooting 3D. Both Sony and JVC both let you zoom at will, though Sony has a greater zoom range (10x vs. 5x for JVC).

The JVC GS-TD1 has its own advantages. It has a faster lens (f/1.2 against the Sony f/1.8 lens), so it should be able to shoot more successfully in low light situations. It can also shoot 3D stills, a feat the Sony HDR-T10 hasn’t mastered. When it comes to price, though, Sony is better positioned, coming in at $1,500 versus $2,000 for the JVC. Both camcorders are expected to ship in the spring. 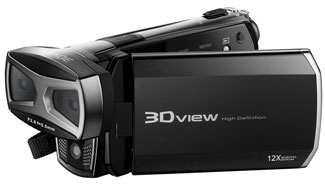 Of course, if the prices quoted here are a little rich for your blood, DXG promises high-def 3D video at under $300 with the DXG-5F9V, due in May. This pocket-size camcorder will shoot 3D video at up to 1080p resolution using two sensors. Like the Panasonic 3D system, no zooming is available when shooting 3D, but there’s a 12x zoom for 2D video. The 3.2-inch LCD will display glasses-free 3D. Built-in memory is a modest 128 megabytes, but SD/SDHC card compatibility provides up to 32 gigabytes of storage. As you’d expect, the lens is less low-light-friendly than the expensive camcorders, but DXG does provide the 3D still shooting (up to 5 megapixels) that Sony forgot. And based on the prototype unit we saw at CES, video quality was more than reasonable for the price. 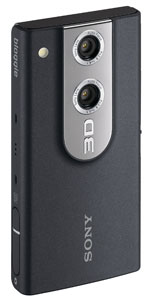 Still too pricey? Sony offers an even less expensive solution with the 3D Bloggie HD camera (model MHS-FS3), which will sell for $249.99 starting in April. Like the other unfortunately named Bloggie models, this one is compact enough to fit in a shirt pocket, weighing in at just 4.2 ounces. It uses two lenses and two sensors to capture 1080p 3D video, 2-megapixel 3D stills and 5-megapixel 2D images. The LCD is a relatively petite 2.4 inches, but it does offer 3D display without glasses.

A key limitation here is the zoom lens or, rather, the lack of a zoom lens – only digital zoom is provided, which inevitably hurts image quality. You won’t find any manual controls on the strictly point-and-shoot Bloggie either. There’s no memory card slot; you get 8 gigabytes of internal memory (enough to hold up to four hours of 2D video), then have to upload your files to a computer. Fortunately the upload is easy, thanks to a built-in USB arm that swings out to plug in. And for someone who wants to dabble in 3D video without making a major monetary commitment, it’s hard to argue with the combination of price and portability Sony provides.

Are there currently any 3d

Are there currently any 3d camcorders on the market allowing zooming while shooting 3D? And is the video quality of 3D camcorders worse than the one of 2D high-end consumer counterparts or it is comparable?