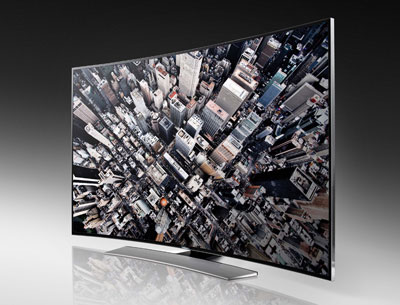 According to every TV manufacturer we listened to yesterday, 2014 promises be the year for Ultra High Definition (UHD) TVs, also called 4K TV. UHD TVs offer 3840 x 2160 pixel resolution, an amazing four times the resolution of current 1920 x 1080 pixel HDTVs. It's not just the manufacturers who have have high hopes for UHD. Market research company Display Search projects sales of UHDs will jump from 1.9 million units in 2013 to 12.7 million in 2014. So it's no surprise that the show floor at this week's Consumer Electronics Show (CES) in Las Vegas is filled with UHDs from every major TV maker, with screens as big as 110 inches.

What can you expect in TVs this year based on this week's CES announcements? See below for a guide to the terms and features you'll be hearing a lot about in 2014.

Throwing you a curve

TV makers aren't sure that simply boosting resolution will convince us to hand over a hefty $5,000 to $25,000 or more on a UHD. So they have a solution to make sure you know you're buying the high end TV they're selling you.

Just as the differences between 720p resolution and 1080p resolution can't be seen on TVs with screens smaller than 50 inches, the benefits of 4K resolution can't be seen in sets with screens smaller than around 70 inches. And since you're unlikely to see a clear difference between 55- and 65-inch HDTVs and a similarly-sized UHD on the retail show floor, TV makers have curved these more expensive (and more profitable) UHDs to differentiate them from standard HDTVs.

Despite the claims of a superior viewing experience, curved TVs actually diminish off-angle viewing. They are also difficult or even impossible to mount on a wall. 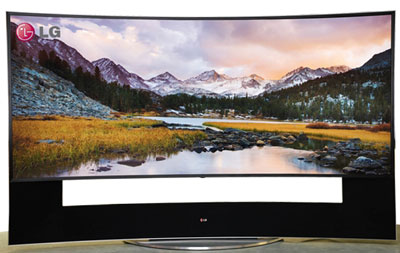 Leading the curved UHD pack are TVs from LG and Samsung. Each company has already announced 105-inch, extra-wide 5120 x 2160 pixel, 21:9 aspect ratio UHD monsters touted as the largest curved TV ever made. But what is 21:9, you ask?

Today's HDTVs are wider than they are tall, at a ratio of 16 x 9 or 16:9. To fill an HDTV screen, modern films are zoomed and slightly cropped on the left and right instead of shown in their original motion picture shape. On an HDTV, you'll see them slightly letterboxed, top and bottom.

But a 21:9 UHD screen more closely matches today's 1.85:1 motion picture widescreen film shape. It provides a more appropriate shape for not only modern widescreen films but especially widescreen spectaculars such as Lawrence of Arabia and Ben-Hur. And alongside standard TV fare, on a 21:9 screen you could also see a vertical sidebar column on the left or right for data. How about a social networking stream or statistics during live sporting events?

If you are movie aficionado or are purchasing a TV to be able to browse the web on the same screen at the same time, this is the size that will suit your needs.

Just as with standard HDTVs, there are two types of UHD technologies: current LED LCD displays and new OLED (organic light emitting display). OLED is the future of TV. Unlike LED LCD, which requires elaborate and often uneven backlighting akin to shining a light through a film slide, each pixel in an OLED display is self-illuminating. When a pixel is black, such as in a dark scene, it's actually off, which means its totally dark; a "black" pixel in an LED LCD set is actually grey because of residual lighting from nearby pixels.

As a result of being able to control the lighting of each individual pixel, OLED UHDs display brighter, more colorful images, a difference easily seen side by side with an LED LCD UHD.
OLEDs also are far thinner — a mere 4mm.

At the IFA show, LG unveiled a 77-inch curved OLED UHD, the largest OLED model. At CES, LG is not only exhibiting this beauty but 55- and 65-inch curved OLED models as well. Curving these sets, of course, negates the advantages of their thinness.

Not all UHDs (whether LED LCD or OLED) will be curved, thankfully. At last year's CES and IFA, we saw flat OLED 55- to 58-inch models from Panasonic, Samsung and Sony and flat UHDs from all the major TV makers including Panasonic, Sharp, Sony and Toshiba. This CES is no different with many new UHDs announced from all the major manufacturers yesterday.

What we didn't see before are UHDs that will be compatible with future 4K content. Current streaming, Blu-ray and broadcast content is all delivered at standard HDTV resolution. All new UHD TVs will be able to "up-convert" this standard HDTV fare to 4K.

But content providers already are thinking of a 4K content future. Streaming 4K content will come first. Both the first and upcoming second season of Netflix's original series "House of Cards" was shot in 4K, and the service already has announced it would start 4K streaming some time this year. In September, Sony launched its 4K streaming service for buyers of its 4K UHDs and its FMP-X1 media streamer ($700).And yesterday, Amazon announced it is working with Hollywood to stream 4K movies and is also filming its aggressive slate of original programming in 4K.

In order to stream and see 4K content, this year's UHDs will include two new standards: HEVC (High Efficiency Video Coding, also called H.265) video compression, which squeezes thick 4K material down to a size that can be quickly downloaded or streamed, and HDMI 2.0, an update to the connectivity standard that enables the full 4K signal to be transferred from an output device such as a Blu-ray player, media streamer or cable/satellite box to your 4K TV. While no announcements have been made, we expect to see the first such HEVC/HDMI 2.0-enabled content devices at CES as well.

Remember that all these features are built to lure you into purchasing a very pricey new TV. Given time and patience, the price will drop. There are already 4K TVs on the market under $1,000.