When it comes to smartphones, many of us feel a bit lost when confronted with the incredible amount of apps available. From games to social networks to various utilities, you can find plenty of apps to entertain and inform.

Recently, we ran down the 9 Free iPhone Apps Everyone Should Download. We figured it was about time we returned the favor for all you Android users out there. 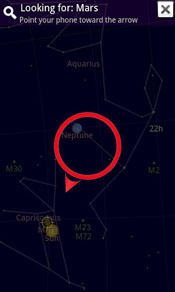 In his wildest dreams, Galileo couldn't predict something as fascinating, informative, and just all-around-fun as Google Sky Map. Ever look up at the night sky wondering what all those stars are? Sure, you know some of the more common constellations like Orion's Belt or the Big Dipper. But what's that other cluster over there? Is that a planet or the North Star? Just turn on Sky Map and all will be clear. The app gives you a representation of the exact star formations you'll see directly above you, as well as names and information about all of them. The best part? You don't even need to be outside. Just move your phone around and the map will display stars from whichever direction you're pointing. 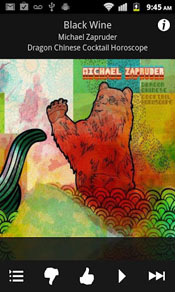 Don't worry, this is one box you'll be happy you opened. Pandora is your own personal radio station. Enter your favorite artists, songs, composers, or yes, even comedians, and Pandora will treat you like a DJ, playing you all your favorites. You can even skip, rate, and bookmark songs. Best of all? Pandora learns from your preferences and suggests similar artists or songs, so it's a great way to find new music you'll love. 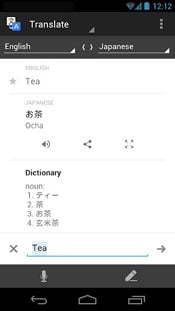 The closest thing we'll probably ever get to a Babel fish or Star Trek's Universal Translator, Google Translate does exactly what it's called. You can easily translate text in over 64 different languages. Simply speak or type, and Google does the translating for you. It'll even speak your translation right back at you. Even cooler, use the Conversation Mode to actually communicate with someone else through a speech-to-speech translation. Es bueno! 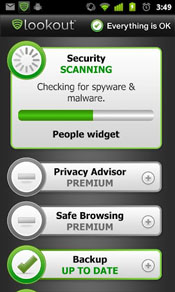 These days, cell phones are as useful as your computer, and that means they're also big targets for malware. If you've always been worried about downloading certain apps on your Android, then Lookout Security & Antivirus will give you some real peace of mind. It blocks malware, spyware, and trojans by scanning each app as you download it. You can also schedule daily or weekly scans. Plus, it has a Find My Phone feature, so if you ever lose it, you can locate your phone and even remotely activate an alarm on it. Lookout also helps you backup all your phone contacts and safely restore them back to your device. That's a lot of security and protection in one free little app! 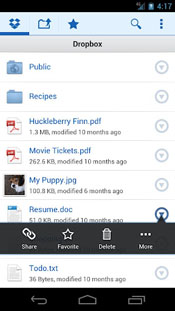 There are plenty of cloud services available these days (Both Amazon and Google now have some good ones), but Dropbox has been around for awhile and it's still one of the best. With the app on your phone you can easily synchronize photos, videos, documents, files, and more across all your devices and computers. Take a quick photo with your phone, easily share it with Dropbox and you'll instantly have it on your computer. Or put it in a public folder so others can view it as well. It's really a powerful and simple way to share photos and videos with your friends and family. 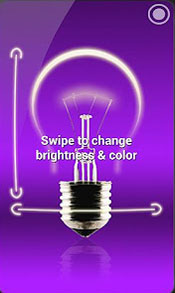 How many times have you gotten to your car in a dark parking lot and fumbled for the keys, so you took out your phone just to get some light? Well, do yourself a favor and install the Tiny Flashlight app. It's not just one of the brightest flashlight apps around, but it offers a number of fun and useful widgets. Besides using your phone's LED flashlight, you can also take advantage of warning lights, police lights, color flashlights, strobe lights, and more. Super simple but a life-saver the next time your power goes out. 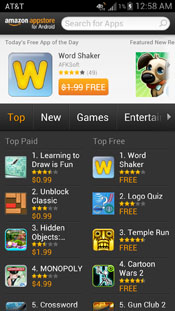 It's tough to beat Amazon when it comes to shopping, and the same goes for Android apps. The Amazon Appstore features a huge assortment of apps across dozens of categories. Easy to browse, you can quickly find your favorite paid or free apps. Be sure to visit the app store daily, since Amazon offers one premium app (meaning, it's a full-featured app) for free every day. Some are lame, some are great, so check back every day. The Amazon Appstore is tied to your Amazon online account, so your apps go with you from your Android to your computer to your Kindle Fire. 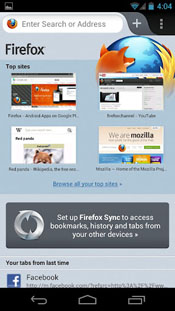 You use Firefox on your computer, don't you? So why wouldn't you use it on your cell phone as well? Download the Firefox app and you'll be browsing the web so much faster and smoother on your Android. Plus, you can sync it up with your desktop version of Firefox and access your computer's browser history, bookmarks, passwords, and more. Your Android basically becomes a satellite extension of your desktop computer. 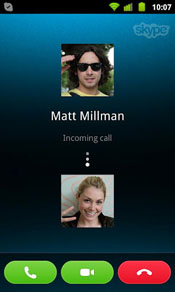 Okay, so it might seem odd using a "free phone call" app on a cell phone. Cell phones do allow you to make calls, ya know. But the Skype app also lets you IM your friends, as well as make video calls. It doesn't matter what phone the other person is on, as long as they have a Skype account too, you can IM or video chat with them anytime. The iPhone's built-in Face Time app is great, but for Android users, Skype is definitely the one to dial up.

Andrew—you should check out the Appreciate Personal App Market…much better than the Amazon App Store because you don’t have to dig through the 500,000 or so Android apps from the Google Play Store and you get personalized recommendations rather than just choosing from the most popular apps. Check it out at http://www.appreciate.mobi

what about Windows Phones?

Everyone seems all stuck on the iPhone, or Android phones…but what about those of us that have a Windows phone? There are sooooo many apps that are NOT available (or even considered?)for the Windows phones, it’s really very depressing.

The installed base of Windows

The installed base of Windows Phone 7 is small compared to iOS and Android, so it attracts fewer developers. Microsoft has been helping developers and, in some cases, paying them to create Windows Phone 7 versions of their apps.

That won’t be the case for long, though. Windows Phone 7 phones will not be upgradable to Windows Phone 8, which is due out this fall. That means that development dollars will likely shift to the new platform. Nokia has said that they’ll continue to support Windows Phone 7, so there may be help there.

TuneIn Radio Pro is the best radio app for android to listen to all the radio stations from all around the world. And yes, it is worth to spend the buck to get the “pro” instead of the “free” version you will get a lot more stations, for example, I connect my Kindle Fire with my Boom Box and I get a super radio.

What about app on a Basic phone

Everyone is into iPhone,Antroid phone, etc. / WHAT ABOUT THOSE OF US THAT HAVE BASIC PHONES ?? How about free app / free games?? HELP

That's the benefit of a smartphone

That’s exactly why everyone is switching to smartphones - you have a choice of hundreds of thousands of apps. Granted, most aren’t very good, but thousands of them are.

Carriers offer a very limited selection of games and services on basic phones, but they vary by carrier and phone model. The apps are also vastly inferior to what’s available on smartphones.

Unless the monthly data fees are an issue, moving to a smartphone is highly recommended.

Are these apps available for blackberry phones?

For the most part, no.

Except for Pandora and Dropbox, I believe the answer is no. And the functionality is not the same. For instance, the BB version of Dropbox only lets you upload photos.

Was checking out the app

Under #4 it says “Allows application to take pictures and videos with the camera.  This allows the application at any time to collect images the camera is seeing.”  I’m not sure I understand. Does this mean some unknown entity can use my phone to see where and what is happening without my knowledge or permission?

Here's what they say

According to the makers of Tiny Flashlight,

There’s no easy way to verify this, which is why you should also consider an app’s reputation. Tiny Flashlight has been downloaded nearly 1.5 million times and has excellent reviews, so I would classify the risk as very low.

The amazon apps are ridiculous. I cannot get a FREE app without registering a credit card, which I will NOT do for a free item. The last time I left credit card info with a site-Itunes!!-I started to have unauthorized charges show up and had to go through all the hassle of canceling credit card and getting a new one along with dealing with getting money back, changing online payment, etc. Amazon needs to get a grip if they are going to offer free apps.

Good apps.
I think you need to add Mailwise, it’s a free email app for outlook and Hotmail, and it works great with Exchange. Very easy to use, and saves time.

‘Mesh it up’ is an Android app that let you transfer files between two or more Android devices without using your internet or Bluetooth. Main advantage is this app transfer big files within seconds. Share images, videos, apps, contacts, files among any Android devices of any size. You can transfer 1Gb file in just few seconds. Connect your Android smartphone to PC, tablets, laptops while skipping the hassle of wires.
Check out below following link.
https://play.google.com/store/apps/details?id=com.dinero.mesh&hl=en

Amazon is one of the world’s largest and most trusted sales sites. I’ve been using them for years, have several cards connected there, and have NEVER had a problem. I agree that it’s odd to have to register a card to download a free app, though.

My facebook accounts has been hacked, so please delete them both please,under pamela and pam butler. Thanks

This isn't the place to do that

If you want to delete your Facebook accounts, you need to do that yourself through Facebook. Follow
these instructions for instructions on how to do that.

Fb accounts hacked and i

Fb accounts hacked and i want them deleted please. Pamela and pam butler. Thanks