Apps to Help You Sleep Better 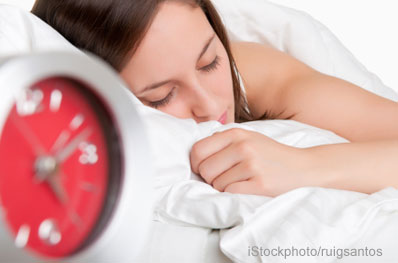 The quality and duration of your sleep, as well as the phase of sleep you're in when you wake up, can make or break your day, so it makes sense to invest in getting the best night's sleep you can. There are sleep tracking gadgets you can strap on at night that monitor sleep, including whether you're getting enough restorative REM sleep, something that’s more difficult to do as you age. And, there's the Renew SleepClock by Gear4 that combines a motion-sensing iOS-compatible docking station and clock radio with a dedicated app capable of waking you gently at the optimal time while tracking your sleep habits over time.

But if you're not ready to strap on a gadget every night in search of some extra shut-eye, there are apps that are designed to help. Here are four innovative tools that are well worth a try. 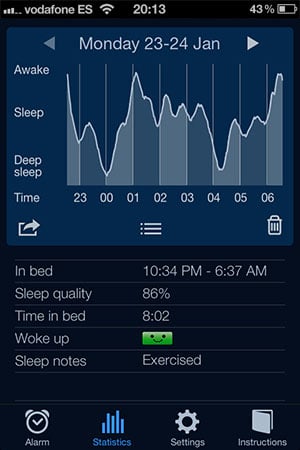 The phase of sleep you're in when your alarm blaringly wakes you can markedly affect how rested you feel for the rest of the day. If your alarm rouses you during a deep sleep phase, for example, getting out of bed will be much more difficult than if you'd awakened during light sleep.

The beauty of this app lies in its simplicity. Just rest your iPhone next to your pillow before falling asleep, and Sleep Cycle uses your phone’s accelerometer and microphone to monitor your movements and sleep cycles. Instead of a setting a traditional alarm, you assign a 30-minute window in which the app’s alarm may engage. Based upon what sleep stage you’re in during that time frame, the app will wake you at the most optimum point.

Once you’re awake, the app shows you details about your sleep such as how long you slept, a rating of your sleep quality and an hourly bar chart that shows you what sleep cycles you experienced throughout the night. 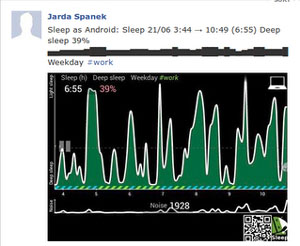 This unusually named app is similar to Sleep Cycle in that you sleep with your phone next to your pillow, and its accelerometer senses your movement to know when you’re in various sleep states so as to wake you at the optimal time within a 10- to 40-minute window of your choosing.

The app has some interesting features, such as the ability to record sleep talking or snoring, and it offers soothing nature sounds that can help you fall asleep. If you’re a chronic over-sleeper due to snoozing, you can set the app to turn off the alarm only after you've successfully completed a CAPTCHA task (such as figuring out a math problem) to prove you’re really awake. Social sharing types will like the way Sleep as Android lets you post your sleep charts to Facebook and Twitter. 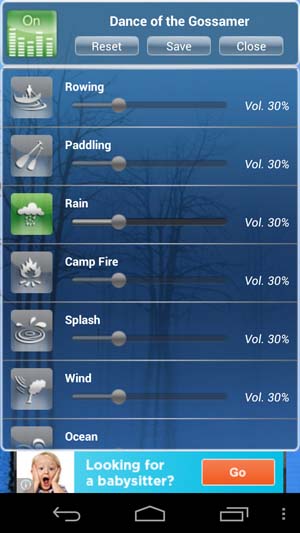 Think of the last time you had a rejuvenating spa experience like a relaxing massage or facial. The music you probably heard in the background may have lulled you to sleep.

This Android app gives you piano instrumentals meshed with your choice of more than a dozen nature sounds, such as falling rain or waves lapping against a shore, for a tranquil way to fall asleep. It includes a timer so you can set it to stop playing after a certain amount of time, as well as an alarm that will wake you with serene music.

The developer says all the music uses low-speed alpha wave frequencies from 8Hz to 9Hz, resulting in "binaural beats" that elicit relaxation. According to the app's description on Google Play, "to generate such a frequency in one's mind, binaural beats are applied. For example, if the left ear is presented with a steady tone of 500Hz and the right ear a steady tone of 508Hz, these two tones combine in the brain. The difference, 8Hz, is perceived by the brain and is a very effective stimulus for brainwave entrainment." So you need to use the app with headphones to get the binaural effect. Sleep Phones ($39.95 on Amazon) would be a good option.

The jury is out scientifically speaking on whether binaural beats actually works–studies both support and refute claims of relaxation. But the sound mixer is a good one and for people who have a hard time falling asleep, a free app that may provide a peaceful distraction for a busy mind is worth a try. 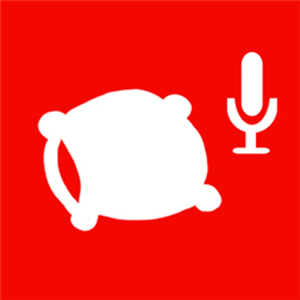 If you’re a Windows Phone user and someone in your bed talks while sleeping, this app will record what’s being said. It uses the phone’s microphone to capture only talking, not other sounds or silence. It includes location awareness to let you know if your nighttime ramblings are more or less frequent depending on where you sleep. And if you’re particularly entertained by what you hear, you can upload a recording to the cloud and share a link to it with others.

Make sure to keep your phone plugged in while you're using Sleep Recorder. Since the app "listens" all night long, it drains the battery pretty heavily.

A Gadget to Put on Your Radar: Beddit 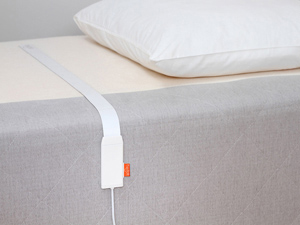 There’s good reason Beddit has far surpassed its fundraising goal on the crowdsourcing site Indiegogo. This uniquely unobtrusive technology uses a sensor strap under your sheets to communicate with your iPhone or Android via Bluetooth, capturing a host of metrics throughout the night: sleep structure and quality, heart rate, breathing rhythm, snoring and the sleep environment.

Beddit's makers, who used Indiegogo to raise money to finish building out the product and app, say the device is not only a sleep tracker but also a wellness advisor. Because the device can take so many physiological measurements, it can gauge your stress and fitness levels and give advice on managing your stress and optimizing your exercise recovery, lifestyle and sleep.

Beddit uses sensors on your phone to detect light levels in your bedroom so it can understand your circadian rhythm. Data regarding your sleep cycles helps the app know precisely when it’s most optimal for your alarm to sound. We also like that the sensor plugs into the wall so batteries or charging aren’t needed. Beddit is expected to ship in November.

Price: $99 via preorder through the Indiegogo campaign until mid-October; after that, $149  Update: $149 when the product becomes available later this year.

We love Relax and Sleep.  It has over 30 different sounds (guitar playing, babbling brook, air conditioner sound) that can be combined together and can be played at varying sound levels.  Love this app.  You can set it on timer or have it run until you turn it off.  Doesn’t take much battery power to run, but I generally plug the phone into the charger when using it, so I am ready to go in the morning.

My fan went out last week and I searched the internet and found “White Noise” which has a alarm that turns it off and you simply wake up!  It’s free too! Here if anyone is interested. http://www.whitenoiseplayer.com/

I’ve recommended Andrew Johnson’s hypnosis app for sleep (Deep sleep) to many of my clients and they report getting the best sleep of their lives with it. I’ve used several of his apps and they all put me out like a light.

Can these be used on a tablet?

I’m just wondering if these apps can also be used on a mini ipad and/or kindle?  Sorry, I am tech challneged so not sure about a lot of tech things!

as easy as easy can be. I use “ambiance” you just download it from the app store. I have had it so long I assume it is free or .99 and then you get all the sounds you want for free and you can set a timer for it to stop playing once you are asleep. I have used it for over 7 years, I even have my significant other make requests on the sounds he wants at night(forest vs. ocean). My problem is getting up. Its becoming a bigger issue as I get older.

Aren’t there a lot of issues with EMF’s and health?  If so, why on earth would I want to put one under my sheets and lay on it for 1/3 of my life?

There are no issues

There have been tons of scientific studies looking at potential health effects of EMF and the evidence is clear that EMF does not impact health. And even if there were an effect (which there isn’t), the amount of EMF you’re exposed to from a phone “near” where you’re sleeping is very small, probably less than you get from working at your computer all day.

I’d like to see he studies to which you refer.  Anything I’ve rea says just the opposite of what you’re saying.

Also, I was referring to the item that goes under the sheet, not a phone a few feet away.

Here are some examples

These are summaries from major health organizations examining the evidence across numerous laboratory and epidemiological studies into the effects of EMF on various health conditions:

Those are rather technical reads. For a simpler summary of the current state of research from the National Institutes of Health see: http://www.niehs.nih.gov/health/topics/agents/emf/

The non .gov sites won’t load on my tablet, and I’m not inclined to buy into what our infamous government tries to sell.

I’ve been using Sleep Cycle for about a year now and I LOVE it. Not only does it give me the whitenoise/sleep sounds I need when traveling but since you can add all kinds of custom Sleep Notes (ate a late dinner, drank wine, etc”), it really lets me see what things are triggering a poor night’s sleep and, what helps me get a good night’s sleep.  Love the alarm too…not too jarring.

The gap with most sleep apps is that they only track your sleep and give you generalized feedback.  For people with insomnia, a personalized, tailored program like SHUTi.me takes the sleep data and then personalizes a program that incorporates Cognitive Behavioral Therapy (CBT) techniques to help users overcome their insomnia.  That’s where technology really shines.

gadgets for a good night's sleep

those apps perhaps help us to have better sleep, but you could try other gadgets here http://bit.ly/1vujr4v

I’ve tried many of the sleep cycle apps, but they sometimes are a hit or miss; like waking me up totally in the wrong point of my sleep cycle, just feel jetlagged more than usual

When my thoughts are racing it’s also no good to fiddle more with the device, sometimes checking the data is too “interesting” :D

There’s a bunch of free apps on the app store, white noise generating and the likes of “nature loops”, some of them are actually pretty nice and no ads either - try looking for those

Get some sleep people