Now that we’ve entered the era of motion-sensor cameras and accelerometers, dance videogames that require those plastic pads are history. The Xbox 360 Kinect, because it tracks the entire body, leads the pack in movement gaming, but the PS3 Move and Nintendo Wii offer solid options, too. Here’s a look at our top picks. 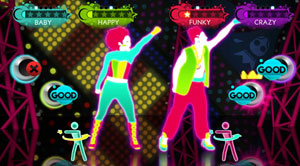 This best-selling series keeps getting better with every version. Players follow the moves of silhouetted, day glow-accented on screen dancers in inspired (and often hilarious) choreography. While unskilled novices won’t fail out of any routines, expert hoofers will struggle to master them. It’s a fantastic workout, and Sweat Mode tracks calorie burning. The song list that includes 70’s disco (Earth, Wind and Fire), 80’s classics (Ah Hah’s “Take on Me”), electronica (Daft Punk), current pop hits (Katy Perry). Note that Just Dance 2 is worthwhile, and a bargain now that this version is on the market.
Price: $31.41 for Wii, $39.26 for Xbox 360, $37.34 for PS3 on Amazon.com 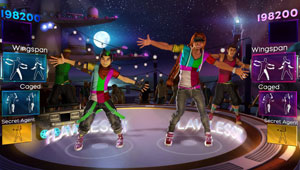 The crème de la crème of dance games, Dance Central 2, like the first game, has you mirror the action of an impossibly stylish onscreen dancer. Cue cards scroll along the side, indicating upcoming moves. The game tracks full-body movement and walks players through a large number of moves, weaving them nicely into full routines. And you can now have two players dance simultanously. Should you tire of the 40 included tracks, you can buy more, downloadable through Xbox Live. Further, DC2 serves up a smorgasbord of cooperative, battle and workout modes to groove your way through.
Price: $43.26 on Amazon.com 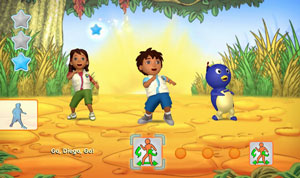 Very small kids (and coordination-challenged adults) will definitely struggle with the complex moves in Just Dance and Dance Central titles. Here’s one with rudimentary moves and – more importantly – Nick Jr. characters, that tots respond immediately to. Dora, Diego, the Backyardigans, and the Fresh Beat Band characters are all playable to 30 different songs. There are two-player options, too. Just don’t expect a deep gameplay experience or moves you’ll take to the club. Also, a recurring tutorial that you can't skip past will annoy impatient gamers of all ages.
Price: $29.99 on Amazon.com 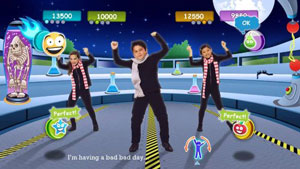 Should the Just Dance games for older people prove a little too tough (or maybe Lady Gaga strikes you as weird for preschoolers), Just Dance Kids 2 is a good option that’ll appeal to a slightly wider age range than Nickelodeon Dance. Players move along to real onscreen kids in a variety of themed costumes to 40 tracks, including pop fare, tunes from TV shows such as Yo Gabba Gabba, and versions of little kid classics (“Head, Shoulders, Knees and Toes,” and “The Hokey Pokey”).
Price: $29.96 for Wii, $28.51 for Xbox 360, $24.61 for PS3 on Amazon.com