Nav Apps for Your Smartphone 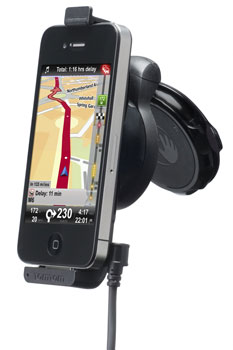 A navigation system–whether it's an in-dash unit for your car, a portable GPS system or an app for your smartphone–is not a luxury. It's a safety net that ensures you can get to where you're going without having to stop for directions or search aimlessly for a gas station.

Until recently, my first choice would have been a portable navigation system. They've had the most up-to-date maps and voice-based turn-by-turn directions, and premium models have had integrated traffic updates and local search, among other features. But the latest crop of navigation apps for smart phones work just as well as stand-alone units, and without the need to buy a new device.

The benefit of having the information stored on the phone is that if you lose your data connection, the app will continue to work. This is primarily a concern for Sprint and Verizon Wireless customers, whose networks don't support calls and a data connection simultaneously. However anyone with spotty data coverage along their routes should consider an app with stored maps.

The downside of stored maps is that you often have to pay a fee to have them updated, like you do today with portable and in-car systems. Plus those maps will take up more than a gigabyte of your phone's memory. But if there's a chance I'll be left hanging without a map, I'd rather have them stored on my phone. 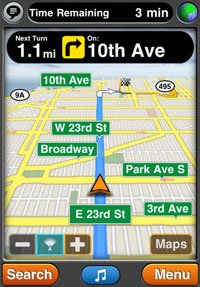 My favorite iPhone app with stored maps is the TomTom U.S.A. ($50). In addition to its simple controls and intuitive interface, the app has a great "Help Me" feature for emergencies. With the press of a button, I can see my current location with cross streets labeled, plus the longitude and latitude for those deserted stretches of highway. I also get the emergency phone numbers and driving directions to nearby hospitals, police stations, car repair facilities and other saviors.

Garmin, the leader in portable nav systems, just introduced its first navigation app, StreetPilot for iPhone ($40). It has the same two-button interface: "Where To?" and "View Map" and general look and feel as the portable products. Plus you'll have real-time traffic updates, lane assist with junction view, and the ability to control your music from within the app.

A less pricey option is MotionX GPS Drive ($0.99) for iPhone. It has Bing local search, and for $20 a year you can add real-time traffic.

On Android phones, your first option comes built right in. As long as you don't want stored maps, just use Google Maps with Navigation for Android devices. It's very easy to use, has Google's local search and free real-time traffic updates. 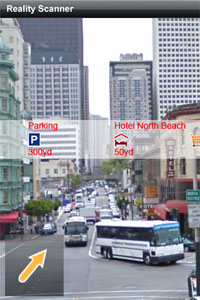 For Android users who do want maps on board, I'd recommend Navigon MobileNavigator ($60). It shows you which lane you should be in and has photo-realistic images or exits and signs. You'll get free, real-time traffic feeds and a feature called "Reality Scanner," which identifies nearby points of interest and shows them in a live camera view.

On BlackBerry, the best is TeleNav GPS Navigator. It's a good, basic app with real-time traffic alerts, but pricey at $9.99 a month (telenav.com).

The only area where smart phones lag behind portable nav systems is in acquiring a GPS signal. If you're unhappy with the GPS responsiveness, you can work around it with a GPS-equipped cradle mount. You need a mount anyway, but the TomTom Car Kit ($79) and the Magellan Premium Car Kit ($100

) have their own GPS chips inside. (Note: These also serve to convert the iPod Touch a GPS navigation system.)

If you don't feel the need to boost your iPhone's GPS reception, you'll still need a suction mount. I like the Navigon Car Kit for iPhone ($45) with its sleek minimalist design.

I have a Tom Tom

I have a Tom Tom Portable Nav System. I just bought it in the end of Dec. I updated the maps and software last week.  It is missing so many streets.  I was lost for 45 minutes one day last week.  I was less then a mile from the store I was trying to find.  It’s part of a mall that has been there for a number of years. On a 4 lane (2 lanes each direction) blvd. and Tom Tom couldn’t find the street!
I tried to find a museum in another town, on the main street of this town which has been there for 50 or more years?  I actually think the town was founded in the 1800’s.  It couldn’t find the street nor the museum.
Tom Tom says “we’re sorry”  hopefully our next update (March, 2011) will have these issues resolved.
I don’t think the iPhone App will be any better, do you?
I spent over an hour on the phone with the tech people. I actually think it’s a problem with my system, not the maps….but I don’t know for sure.
Any suggestions?

The maps should be the same between the portable unit and the iPhone apps. So, if it really is the maps, the app wouldn’t be any better.

I’d try reinstalling the maps. If that doesn’t work, I’d reset the device to the initial factory install settings to see if the streets and points of interest are on the initial set of maps.

Let me know how it works out.—Suzanne

Are there any top-end Phone 7 nav apps out/coming soon?

Sorry.  You talk about the TomTom USA navigation app for the iPhone and the Navigon Mobile Navigator app for Android phones.

Sorry, I don't have a

Sorry, I don’t have a clue, but maybe techlicious knows

The only nav apps currently available for WP7 phones are those supplied by the carriers. For your Samsung Focus, it would be AT&T Navigator for $9.99 a month.

The carrier apps aren’t bad, but $10 bucks a month seems like a rip-off when you can get Google Nav for free on Android phones.

I would be surprised if more options don’t become available soon (perhaps Microsoft is working on a Bing Nav app for WP7?), but we’re not aware of anything.

I bought my latest standalone magellon for $100… the iphone app is $50 ($60 if you want maps of Canada also).  So, is the $50 savings (minus the cost of the cradle) worth it?  With the standalone unit, it is there ready to go at any time… always displaying the maps without me doing anything (and ready to accept an address with just a touch of a button, and in about 2 seconds it can be showing me the route to my favorite destinations).  I don’t have to connect and unconnect it everytime I get in the car, select and wait for the app to load, etc… I do use the GPS a lot even I don’t need it for directions, as I like that it tells me how much farther/longer I have until I arrive at my destination.  And, with the standalone GPS, my phone is still available for other purposes… such as listening to music, and/or making/receiving calls.

Does the Tom Tom for

Does the Tom Tom for IPhone have voice activation and audio so I get verbal directions while I’m driving?

Yes, the Tom Tom will

Yes, the Tom Tom will give you verbal directions while driving. In fact, they you can even download celebrity voices for the Tom Tom to make it more entertaining. Their latest is Homer Simpson!

I have both and the Tom Tom sits in a box. It is a total piece of junk. Maps on it are useless. It missed primary roads that have been around for 20 years.  The garmin tracks me down almost unused foresty roads. Just no comparison. It’s all in the map set not the device.

I agree, the Tom Tom was a waste of money. I returned it and bought a Garmin. Wish my husband had. We have to depend on his when we travel in his car. Actually, I pull out my iPhone and get us where we need to go!

Thanks for taking the time to write this, I enjoyed reading your post and found it very interesting also bookmarked your blog.