by Robert E. Calem on September 19, 2010
in Cameras and Photography, Camcorders, Guides & Reviews 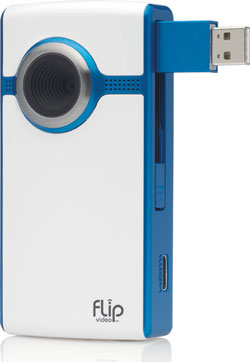 Cisco has revamped its Flip pocketcam lineup with four new models–two UltraHD and two MinoHD models–that boast improved recording quality with a higher frame rate (60 frames per second versus 30 for smoother fast action) and image stabilization. Image stabilization has been found on competitive pocketcams for a while, but has been noticeably absent on prior Flips.

So how do the new Flip pocketcams fare in real world testing? We attached a previous-generation UltraHD 8GB and a new UltraHD 8GB model to the handlebars of a bicycle using two Flip Action Tripods ($25

), and made simultaneous recordings as we navigated a bumpy waterfront esplanade in downtown New York City.

What we got was a significantly less shaky recording from the new Flip UltraHD model and somewhat better color reproduction. But some shakiness did remain, as you can see in the footage below. 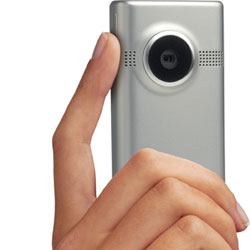 Another notable change, a new FlipPort proprietary connector on the 8GB UltraHD model works with assorted new “Designed for Flip” accessories. Accessories will include a wireless microphone from Scosche and a tiny “pico projector” from iGo to project the camcorder’s stored video.

I love these types of product reviews!

Thank you so much for including the split video of the pocketcams attached to the bicycle.  There is a HUGE difference in the stability of the 2 different models used during that experiment.

It’s reviews like this that help me make better decisions with my purchases!