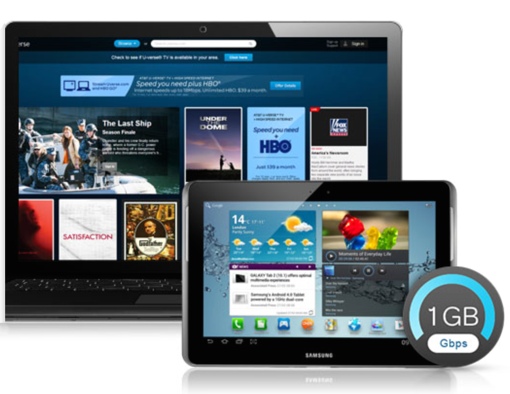 For millions of Americans, the race to bring affordable 1Gbps fiber optic broadband is truly starting to heat up. This week, AT&T announced it has completed upgrading its GigaFiber network to offer gigabit Internet speed to its U-verse customers in Austin, Texas. And according to the company, more cities are in line to get the service soon.

Austin owes its high-speed network upgrade to an April 2013 announcement from Google. The company stated at the time that it intended to build its own 1Gbps Google Fiber network in the city. Less than a week later, AT&T committed to upgrading its GigaFiber network in Austin to match the speed. Google Fiber is expected to launch in Austin this December.

The scene in Austin mirrors that of Kansas City, the first city in the U.S. to get Google Fiber service. AT&T recently sought permission to build a competing fiber optic broadband offering in the nearby suburb of Overland Park. Time Warner, meanwhile, responded by offering its customers in the area significant speed upgrades (up to 300Mbps). When Google explores installing 1Gbps Fiber in an area, history shows that other providers are quick to upgrade, drop prices and compete. Just imagine what will happen when Google's 10Gbps service launches in 3 years!

Other cities in the U.S. may not need to wait long to enjoy similar speeds and competition. Both Google and AT&T are exploring offering fiber optic high-speed Internet in Atlanta, GA; Charlotte and Raleigh-Durham, NC; Nashville, TN; San Antonio, TX and San Jose, CA. Plenty of other cities are also being explored by the companies as candidates for fiber optic networks as well, including Los Angeles, Phoenix, Miami, Chicago, San Diego, San Francisco and Oakland.

As for those of us not in large U.S. cities, options for high-speed Internet remain frustratingly limited. Major ISPs are fighting to keep competition at a minimum where they can, urging the federal government to keep its antiquated 4Mbps definition for broadband service. That speed is adequate for light browsing, but falls short for delivering quality streaming video without buffering.