The Future of Fitness Tech at CES 2014 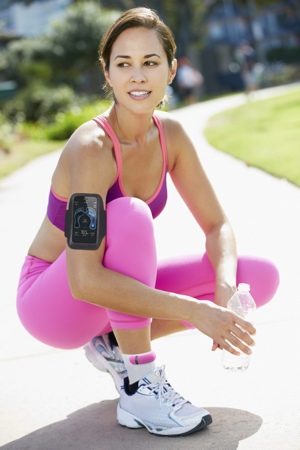 Thinking about running a marathon this year? Don’t forget your Bluetooth-enabled socks.

Fitness tech is making a major splash at this year’s Consumer Electronics Showcase in Las Vegas. Whether your fitness goal for 2014 includes losing weight, carving out six-pack abs or simply wanting to have more energy while playing with your kids, there will soon be plenty of new, innovative fitness monitors available to help you reach your goals. They won't just be counting steps and calories like last year's activity trackers: You'll get data on things like blood oxygen levels, body temperature and how your foot strikes when you run. Check out the following products to see what to expect in 2014. 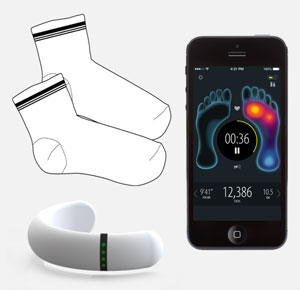 If you’re a runner, the best way to measure your performance may not be with a smart watch around your wrist or with a monitor strapped to your chest, but with a pair of incredibly high-tech socks instead.

Heapsylon’s Sensoria Fitness Socks help track a lot of the running basics such as heart rate and distance run through the use of in-sock sensors and an included Bluetooth ankle bracelet. But that’s just the beginning – serious runners can use the Sensoria Fitness Socks to better understand cadence, foot strike and how weight is distributed on your foot when your run. If you gravitate towards a running style commonly associated with injury, your socks will let you via an included smartphone app that works with Android, iOS and Windows Phone 8.

The Sensoria Fitness Socks won’t be available until April 2014, but they are currently available for pre-order at sensoriafitness.com in your choice of four colors (white, black, pink, blue). A set of four pairs of socks, one anklet bracelet and charger retails for $199.

Electronics giant LG is getting in the fitness game with its new Lifeband Touch and Heart Rate Earphones. The Lifeband Touch half of the equation is part activity monitor, part smartwatch. A built-in 3-axis accelerometer and altimeter helps track your distance and speed. An OLED screen, meanwhile, puts key stats, music and smartphone controls (via Bluetooth) right on your wrist. You can pair the Lifeband Touch with LG’s own app, or a number of popular fitness apps like MyFitnessPal, MapMyFitness and Runkeeper.

To take the Lifeband Touch to the next level, though, you’ll want to pair it with the LG Heart Rate Earphones. They measure the blood flow in the external part of your ear, measuring your heart rate and oxygen consumption (VO2 max). And the Heart Rate Earphones are no slouch at pumping out the tunes, either.

Both the Lifeband Touch and Heart Rate Earphones will be available in the first half of 2014. Prices have yet to be announced. 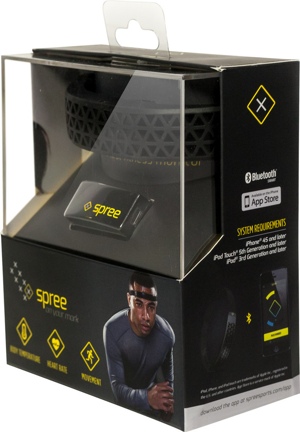 Most popular sports and activity monitors fit around the chest or wrist. But that may not be the best location for the tech in terms of comfort and functionality – you can get more accurate measurements via your forehead. That’s the operating principle behind the soft touch silicon Spree Headband fitness monitor.

The Spree Headband tracks heart rate, movement and body temperature, which it sends to its own iOS smartphone app via Bluetooth. You don’t need to be a kinesiology major to interpret the data it gives you, though. The Spree app learns about your goals and simply tells you when you’re “in the zone” – the optimal state for you to burn calories or add muscle mass. It can also warn you if your core temperature puts you at risk of overheating.

The Spree Headband (iOS only) is available for order on spreesports.com for $299 in your choice of black or grey. It is expected to ship in 4 to 6 weeks.