I don’t know about you, but not only was Clue a favorite game of mine growing up, but I also remember taking in the harebrained, live-action movie and wishing on several occasions that I could learn Miss Scarlet’s make-up tricks. But I digress, because what I’m really trying to discuss is the newest edition of this classic board game, called Clue Secrets & Spies. 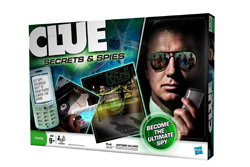 You won't find Colonel Mustard doing anything in the Library in the new Clue. To begin with, everybody has just one name, like Cher. So in the new game you have Plum, Mustard, Peacock, Scarlet, White and Green. And, they are all international secret agents trying to infiltrate the Criminal League for Ultimate Espionage (C.L.U.E.) in an attempt to intercept and stop Agent Black—all while remaining anonymous.

What's particularily innovative with Clue Secrets & Spies is an interesting text message feature that lets you receive texts from C.L.U.E. headquarters with inside tips to help win the game. And when I say text messages, I mean real text messages with real cell phones, so if you don’t have a data plan with unlimited texting, this may not appeal to you (though the texting is optional). Hasbro says it is committed to supporting the text aspect of the game until December 31, 2011. 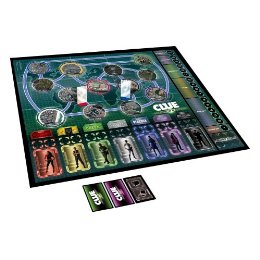