Next month, when Microsoft launches its next-generation phone operating system, Windows Phone 8, the signature phone will be HTC’s 8X. The colorful 4.3-inch model, along with 4-inch HTC 8S and Nokia’s recently-announced Lumia 920, makes the type of bold design statement that Windows Phone should have made when it launched two years ago. 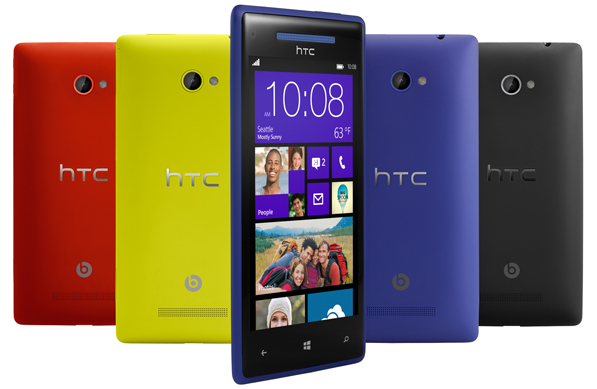 On looks alone, the 8X is a winner. The gently curved unibody design comes in four eye-popping colors, which are mirrored by the color scheme in the Windows Phone operating system, and the 1280x720 super LCD 2 display looked ultra-crisp at 342 ppi (versus the iPhone 5’s 326 ppi display) and is protected by Gorilla Glass.The 8X also feels great in my hand, with its rounded bottom and soft-touch finish.

Spec-wise, the 8X competes with Samsung Galaxy S3 and iPhone 5, with its 1.5GHz dual-core processor, access to 4G LTE networks and dual-band Wi-Fi. In fact, the 8X and Galaxy S3 use the same Qualcomm S4 processor.

The 8MP camera, with its f/2.0 28mm lens, is the same one HTC put in its One X, One S and EVO 4G LTE which in our testing delivered excellent quality. In fact, it’s as good as, if not better, than the Galaxy S3 and should hold its own with the iPhone 5 too. The 8X also gets an impressive 2.1MP front-facing camera that has a wide-angle lens, records at 1080p and accesses the same dedicated imaging chip.

The 8X will come with built-in amplifiers and Beats Audio for bigger and better sound. And, it will have NFC (Near Field Communication) for sharing phone to phone and mobile payments, among other applications—something iPhone 5 doesn’t have.

What the 8X lacks is an SD slot to expand memory beyond the built-in 16GB, a removable battery and Bluetooth 4, the low-power variant that’s cropping up in a variety of peripherals.

In all, the 8X gives a promising and competitive start to Windows Phone 8. It will be available in November on AT&T, T-Mobile and Verizon.

When you mentioned Beats Audio, it reminded me that I have that preloaded on my HTC One S.  In fact, there are a lot of preloaded apps and gadgets on my phone.  I don’t know what to do with most of them.  I feel the term “bloatware” is apt.

When I first got the phone, I tried to delete many of these unasked for apps.  My phone went haywire.  I had to do a factory reset.  Now, I just deal with their presence.

Could you address this?

Many thanks in advance for your consideration.

It drives us nuts, too!

Bloatware has been a real problem with Android phones. The issue isn’t Android or the phone manufacturers (for the most part), it’s the carriers (AT&T, Verizon, etc.). They put the bloatware on there either because they make money from third-parties from doing so or to get you to sign up for their proprietary music stores, navigation services, etc. when the stock Android versions are already much better (and free). In fact, I don’t think I’ve ever found a piece of bloatware that was better than what was already available elsewhere.

What is even more frustrating, as you found out, is that the carriers make uninstalling this bloatware nearly impossible for the average user.

Why is this an Android problem and not Apple? Simple. Apple has more clout and can force the carriers to keep bloatware off their devices. (though some might argue that some of the Apple features, like iCloud, are their own form of bloatware if you would rather use Google Drive or another service).

When we do our in-depth phone reviews, we’ve often called out manufacturers who take the bloatware thing over the top. And we’ll continue to do so. But for the foreseeable future, bloatware on Android is a fact of life.

The HTC 8X display sounds great and I love the fact that it has built-in Gorilla glass.  It’s like a built-in insurance policy.

The NFC is another great feature, one that will be standard in future phones.  I love the day that all payments, coupons, gift cards, sharing of pictures, opening of doors, turning on locks, etc. will be done by waving our phone at things.

I am a fan of Windows phones, the updated tiles make it easy to keep abreast of tweets, e-mail’s, upcoming trips, and more.  Windows just needs to keep working on getting their app market up to speed.

I’ve addressed bloatware in droves - I’ve found in travels European and Asian markets don’t have half the issues as in 99% of the cases they purchase the phone first clean and pick the networks second and apps are third application as the standard is GMS and not the U.S’s standard CDMA networks. The truth CDMA is great for speed/voice clarity U.S but sucks in data price. (my choice Feature phone CDMA $15per mth bill & Clean foreign GMS smartphone $30per mth bill 5g data) clean smartphone abroad HTC Amaze from reputable dealer $89 last year.

Hidden clue though is there is a what is called a program operation App Lock Get the Code to Unlock it it can be uninstalled Bloat Appware without locking out the Phone but who holds that is the very Networks and they will not give those up until well your contract is up, you phone becomes obsolete with a newer version and additional money to made selling the code.

This program unlock feature is common knowledge to large buyers of cell phones for corporate use - or corporate owned phones as most businesses per mandate will not permit gaming or non-business functions on smart phones and network and pay outright for them.(seen it issued on a second corporate buy out but didn’t have the clean phones so they modified existing consumer stock)- as most corporate business phones are ordered months ahead without the Bloat Apps feature.

Plus require the use of Apps that use higher volumes of data/data space. It’s corporate buying power offers more freedoms then normal consumers. There is a bill house floor last heard but have a feeling it will be shot down about this and the lockout of choice phones you apply to a network and features restriction of Apps.