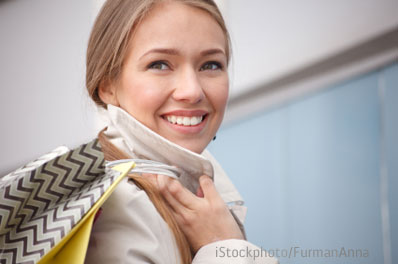 Collecting data on customer behavior is nothing new for most online retailers. Now, brick-and-mortar stores are trying to get in on the action.

Numerous retailers, from Family Dollar to Nordstrom, are hoping to gather valuable information about their customers in their physical outposts, The New York Times reports. By using video cameras, cellphone signals and facial recognition technology, the companies can hone in on information like shoppers’ gender, the time they spend examining merchandise before making a purchase and even their moods.

RetailNext, based in San Jose, Calif., is one company that now helps retailers collect data. It’s technology can track a customer in the store simply by following the signals in a shopper’s smartphone that search for Wi-Fi—even if they did not connect to any network.

Another company, Brickstream, in Atlanta, offers stores a state-of-the-art camera that can pinpoint which aisles are most popular, based on its headcount of people throughout the store.

Some cameras have become so advanced that they can also determine what specific item shoppers are examining—and for how long.

And in-house advertisements could even be customized to a customer’s mood. Some companies, like Synqera, a start-up in St. Petersburg, Russia, can now determine both basic demographics and customer moods by using facial recognition technology at the checkout counter—and then customize marketing messages to those stats. “If you are an angry man of 30, and it is Friday evening, it may offer you a bottle of whiskey,” Ekaterina Savchenko, head of marketing for Synqera, told The New York Times.

Will There Be Customer Backlash?

While consumers have long accepted being tracked while online, the idea of the same technology in person can be rattling to many shoppers.

Nordstrom ran an experiment last fall that tracked customers’ movements through their smartphones’ Wi-Fi signals. When the company then informed shoppers of the tracking program, a wave of complaints followed, and Nordstrom called off the experiment in May, in part because of customers’ negative reactions.

But some shoppers may have no problem giving up privacy—as long as there’s something in it for them. One company, Placed, has developed an app that lets customers agree to take part in a tracking program, in return for rewards like cash and Amazon gift cards. Users reveal their demographic stats (like gender, age and income), and permit the company to follow them through Wi-Fi and other cellular networks. The company then sells the useful information to retailers and app developers.

So if the new technology allows shoppers to receive deals they find valuable, they may be more than willing to let the tracking continue.

It would appear we need to turn our phones off when we shop-I for one don’t have anything that important I’m waiting for to trade privacy for having it on.

“So if the new technology allows shoppers to receive deals they find valuable, they may be more than willing to let the tracking continue.”

Not this shopper. I’m with godsprincess; my privacy is worth a whole lot more than a good deal. I do everything I can now to keep from being tracked. It looks like I’ll be adding another invasive tactic to my no-go list.