As more cyclists hit the roads in cities from San Francisco to New York, a new wave of technology is infusing the humble world of cycle lights and accessories. From intelligent lights that react to traffic conditions to handlebars that signal turns and a keyless smart lock, we'll look at new bicycle tech that makes urban cycling safer, faster and even greener. 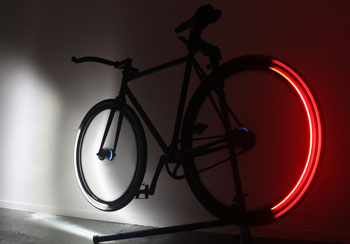 See and be seen: Revolights

For cycling in night traffic, it's crucial that cycle lights have good side visibility. Revolights manage 360-degree visibility with LED rings that fit around the inside of your wheels, instead of on the frame. Sensors inside the rings monitor how fast the wheel is spinning so that the LEDs only light up when at the front or back of the wheels, creating red and white arcs of light that are visible from all angles. The front light also casts a wider beam than standard lights, showing any obstacles in your path more effectively.

Price: $229 (front and back lights) at www.revolights.com or Amazon 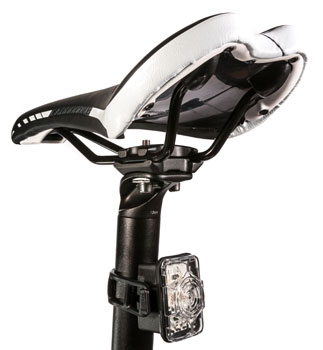 If you prefer more traditional lights, See.Sense smart lights lock on to your bike frame in the usual way, but that's where the resemblance ends. These smart lights flash more vividly when you need to be seen — in heavy traffic, at intersections or in tunnels — thanks to sensors that monitor road surface and light levels, your movements and your bike's speed and orientation. Side visibility is high, with a broad swath of light created by lens tech similar to that used in lighthouses. The See.Sense turns on and off via motion gestures once you’ve unclipped it from the bike, and USB charging negates the need for batteries. Front and back light sets are available in three levels of light intensity. 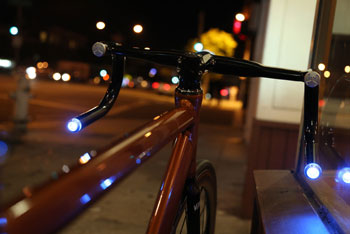 These USB-charging handlebars have a built-in headlight and two rear-facing LEDs that can be used to signal right and left turns via blinker buttons on the stem. When the handlebars are Bluetooth-paired with a smartphone, these end-lights also act as a simple turn-by-turn navigation system by blinking in the direction of the next turn. The Bluetooth connection also means the headlight can sense when you are nearby, turning on; it later turns off when you walk away. 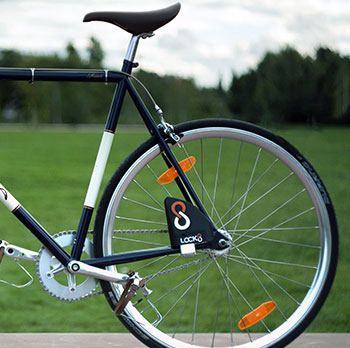 This futuristic lock is packed with theft-deterring sensors, including a motion detector, temperature sensor and hot-wired cable. Any tampering triggers a screeching alarm and a notification to your phone. It unlocks via a smartphone app, so there's no key to lose — and for shared bikes, you can let up to five other people use the e-key on their own smartphones.

If a thief does manage to make off with your bicycle, a GPS tracker in the lock helps you hunt the bike down as part of a subscription service that Lock8's creators expect to cost around $2 a month. Each Lock8 comes with a set of spoke reflectors that have built-in magnets to charge the lock's battery every time the wheels move. The Lock8 will be available in mid-2014. 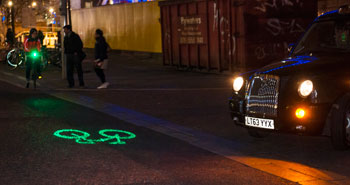 Many cycle crashes occur when vehicles turn across the path of an unseen bicycle. The Blaze laser light helps increase bicycle visibility by projecting a green bicycle symbol 5 to 6 meters in front of the cyclist in order to gain the driver’s attention before it’s too late. As a waterproof front light, its high-intensity bulb makes it as effective in city traffic as it is on pitch black country roads, rain or shine. The 13-hour battery is USB-rechargeable. 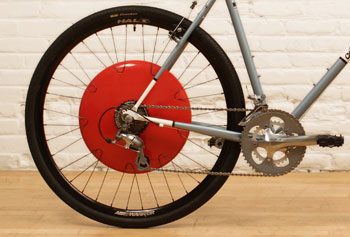 This new project from MIT scientists turns an ordinary bicycle into a hybrid-electric — but only when you need it. The Copenhagen Wheel replaces your back wheel and comes packing sensors that measure how hard you're pedaling. When you're pedaling hard or fast (say, up a hill), the wheel responds with a corresponding boost in electric power.

Linked iPhone and Android apps track usage stats such as time and distance traveled and calories burned, and app developers are being invited to create even more. For extra green points, the wheel is powered by a built-in battery that collects energy when braking or going downhill. The Copenhagen Wheel will be available in fall 2014.