One of the settings in the latest, sixth generation, iPod nano triggers an attractive clock screen to display first when the power is switched on, allowing geek-chic users to wear the diminutive device as a watch during workouts or for outings. So accessories makers have responded to this market opening with a variety of nano watchbands in fashion colors.

Here for your sartorial scrutiny are some of the most colorful and affordable nano watchbands I've seen recently, including one specifically designed for women. All are made of a soft rubber-like material that provides some shock absorption as well as comfort.

But as with any fashion leap, there are caveats to consider: Essentially wrist-wearable cases, all of these watchbands protect nearly the entire nano, yet in the process also cover up its dock connector, and thus may create as much inconvenience as convenience for gym-goers––by making it impossible to use the Nike+ Sport Kit (or any other accessory using the connector) at the same time. In addition, southpaws may find the orientation of these watchbands uncomfortable, because they orient the nano’s control buttons facing right instead of up.

Lastly, their size also results in added heft that effectively obliterates the nano’s svelte profile. Some people may consider this a fashion faux pas. I find it geek-chic. 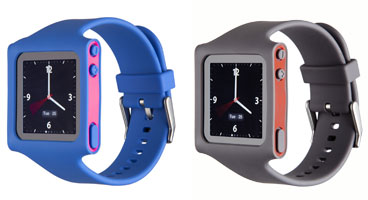 Like two products in one, the new Speck TIMEtoROCK watchband ($24.95) is packaged with a pair of adjustable armbands––one for smaller and one for larger arms––for managing the headphone cords that you’ll still need to listen to your audio.

As with the other watchbands highlighted here, the nano slips into what is essentially a rubber frame, with protective bumps to cover the device’s on/off and volume control buttons and a hole for accessing its headphone port. 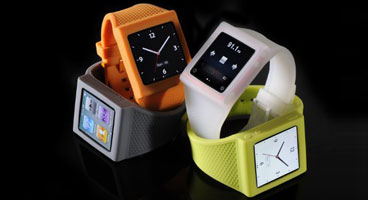 Similarly designed like a traditional wristwatch, the HEX Watch Band for men and Slim Watch Band for women and children ($29.95 each) features an integrated cover for the headphone port, to protect it when no headphones are attached.

The men’s Watch Band is available in nine colors, including six that match the colors of the nano: Clear, Red, Orange, Green, Blue, Black, Grey, White and Pink. 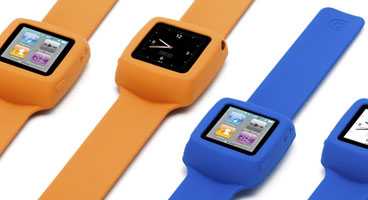 Sold at Apple’s online store as a “Recommended” product, the Griffin Slap ($24.95) features a memory-metal band wrapped in silicone, and a snap closure rather than a traditional hook-and-hold mechanism. It automatically adjusts to the wearer’s wrist size when it’s slapped on to close like a bracelet, and will lie flat when not in use.