Should You Upgrade to Windows 7?

The biggest and most important advantage of Windows 7 over Windows Vista is speed. Benchmarks (see ZDNet story here) have shown that Windows 7 is faster than Vista, but only by a small margin. But more important than benchmarks is how fast the OS feels, and in that respect Windows 7 blows Vista out of the water.

Gone are many of the tiny pauses between a mouse click and action, and the lags that made Vista feel sluggish. When you click on a menu in Windows 7 it opens almost immediately, when you start a search from the start menu results appear in fractions of a second making the whole OS feel quite snappy. These improvements are hard to nail down with numbers, but the general consensus (and our experience) is that when it comes to straightforward system responsiveness Windows 7 is a winner.

The speed improvements are nice, but if that were all Microsoft had to offer, considering the price of upgrading (starting price is $119.99), we'd tell you to skip it. Thankfully, Windows 7 comes with enough new features and tweaks to make it feel like a real step forward from Vista, without confusing or alienating longtime users of Windows.

The most noticeable new feature is the taskbar, which lets you “pin” programs and documents to it for easy access. All windows for a single program are collected under a single icon.

Mouse over the icon and live previews of each open window (or tabs in a Web browser) pop up and allow you to easily find what you're looking for. Move the mouse over one of these previews and it brings that window to the top allowing you to quickly glance at it, very handy if you're trying to work on multiple applications at the same time. 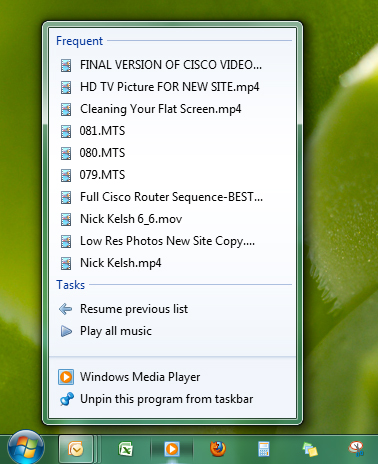 Some applications also support what Microsoft is calling "Jump Lists," enhanced context menus accessed by right clicking on taskbar icons. Options include recently opened files, Web browser bookmarks and media player controls. There are other interface tweaks too. Drag a window to one edge of the screen and it is instantly resized to take up half the screen. If you drag a window to the top edge, it's instantly maximized. And if you take a window and shake it, all the other windows are minimized.

Windows 7 streamlines the whole business of file sharing within a home network. Doing this is now as easy as joining a "HomeGroup" and entering a password.

Microsoft is also investing in what it sees as the future of computing by building in support for multi-touch screens. Most PC manufacturers have models—all-in-ones, laptops, or standalone monitors—that will take advantage of this from day one.

There are two types of installations—“inline” and “clean.” Vista can be upgraded “inline,” meaning that the upgrade to Windows 7 will not erase your files or programs (but we strongly suggest backing up your files beforehand anyway). An "inline" upgrade is only possible, though if you purchase the equivalent version of Windows 7 or Ultimate. If you don't, or you're using Windows XP, the upgrade will require a "clean" install, meaning it will erase your hard drive and you'll have to back up all your files and reinstall your applications.

Microsoft has a downloadable Upgrade Advisor, which tests your computer to make sure its capable of running Windows 7 and that all your hardware is compatible. It's pretty safe to assume that if your computer runs Vista without a problem or you have a new XP Pro machine, that it will handle Windows 7.

For most home users, the Home Premium version will suffice. The extra $100 for the upgrade to Ultimate ($219.99) nets you only a few additional features: Virtual XP (for running programs that worked under XP but don't with Windows 7); BitLocker, which encrypts your hard drive to protect it from prying eyes; and automatic backup of your PC to a network (See Microsoft's comparison chart) .

Chances are that you’re eligible for a free upgrade to Windows 7 if you bought a new Vista PC after June 26, 2009, so double check with the manufacturer (See Microsoft's list here). For owners of older Vista machines, we strongly suggest shelling out for the Windows 7 upgrade. The boost in speed and new interface tweaks make it much more pleasant to use. If, on the other hand, your computer is over three years old and still running Windows XP, it might not be worth upgrading. Instead it might be time to start saving for a new PC.

I tried Windows 7 Beta and I loved it.  It was alot faster than Vista cause I’m still stuck with it on my laptop.  It had some neat features that I liked and some stuff was ok, but just the speed alone wants me to go back.

windows 7 will be my next favorite OS after windows xp… I actually dont use vista personally LOL!

I tried Windows 7 and went back to XP. Anyway, this is really a great reading!

I love the info here.

I love the info here. I went from windows 95 to XP and now 7, way cool… and finding out tips and tricks is nice to learn here.