The Samsung Galaxy S4 wins our award for Best Android Smartphone with a design that's attractive and comfortable, a slew of features, a great camera, and overall top-notch hardware. 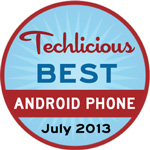 In the world of Android smartphones, shoppers are spoiled for choice. There are dozens of great handsets available at every major wireless carrier in a wide variety of sizes and styles. Sifting through the reviews of the top-tier Android phones, two devices emerge as clear favorites among tech writers and tech buyers: the Samsung Galaxy S4 and the HTC One.

The two phones have a lot in common. Both have large displays in compact bodies, specs that make them speedy, two of the best smartphone cameras available, and a ton of features. Most other Android handsets are playing catch up to these two devices both on the hardware and software sides. But, when it comes time to make a decision, which is the best?

My pick for the absolute best Android phone goes to the Samsung Galaxy S4. Here's why.

In addition to all that is good about Android 4.2 Jelly Bean, Samsung adds its own enhancements to the operating system of the GS4 via a skin (or interface) called TouchWiz. It makes Android a bit easier to use for newbies and, in some areas, makes the OS more efficient. The GS4 also benefits from a ton of pre-loaded apps and services. It's true that the dozens and dozens of Samsung extras and features and apps can get overwhelming. Thing is, everyone who owns a GS4 will find a use for at least a handful of them and most people will have one or two they can't live without. With few exceptions, every other feature can be turned off if you don't want it. The level of customization and choice is deep but not necessary, making the GS4 a very malleable phone.

If you're the type of person who really dislikes interface skins and would rather have a phone loaded with Android the way Google intended it, you can choose the Google Edition Galaxy S4. It's identical to the "regular" GS4 hardware-wise, but doesn't have a skin, extra apps or most of the extra features Samsung highlights. This model is available directly from Google and is expensive ($649) because it's not offered through a carrier and not subsidized.

One of the most impressive aspects of the GS4 is how slim and light it is, even with a substantial display. The 5-inch screen offers a good balance between size and holdability (if that’s a word) because it's relatively narrow; most people will be able to use the phone one-handed.

Much has been made of the GS4's polycarbonate plastic body, particularly in relation to the HTC One's all-metal frame. The benefits of Samsung's approach are more practical than aesthetic. Thanks to the plastic back, owners can access the battery and a microSD card slot. With a smartphone that puts so much emphasis on taking pictures and media, the ability to add more storage is important. And while the GS4's battery life is decent at the outset, batteries have a tendency to lose their longevity over time. If that happens before two years is up, owners can replace the battery instead of being stuck with a phone that needs topping up all the time.

Being a top of the line phone, the Galaxy S4 boasts top of the line specs, including a crisp and vivid 5-inch, 441ppi display, quad-core processor and 2GB of RAM for speed, 16GB - 32GB of internal storage, and the most recent version of Bluetooth, 4.0. The one place the GS4 could use substantial improvement is in the audio quality. The rear speaker is decent but not great, unlike the HTC One's front-facing stereo grills.

The rear camera sports the trendiest number of megapixels: 13. The performance of the camera is more than hype. The GS4 benefits from a good sensor and great software in the camera app. Even when just taking normal shots, the results are crisp and detailed enough to print out. With the extra settings and features on board it's possible to create complex images without an extra photo editing program.

The GS4 is available on all four major carriers—another big plus. Pricing varies by carrier with T-Mobile requiring the least amount of money up front ($149), followed by AT&T, Sprint, and Verizon Wireless ($199). All prices are on-contract or on a payment plan. The Google Edition Galaxy S4 is $649, as mentioned, and is compatible with AT&T and T-Mobile's networks. Before you buy from the carriers, though, check the prices on Amazon Wireless. You can save up to $50, depending on the plan.

Runner up: the HTC One

A close runner up to the GS4. The HTC One's design is undoubtedly gorgeous and feels as premium as it looks thanks to the metal construction. However, the laser cut edges don't feel that great when your hand is wrapped around them. Plus, if an Android device is going to have a physical Home button, it should always be in the center. That aside, HTC kept the One compact, even with a 4.7-inch display, and the overall detail and crafting is above impressive.

The stereo speakers on the front are a good example of that. They add a singular aesthetic touch and deliver really loud audio. If you want a smartphone that serves as a media player, the HTC One is a great choice. The Beats Audio enhancements -- most prominent when listening through headphones -- make everything from music to video to games sound better than the average phone, including the Galaxy S4.

Specs-wise the One matches the GS4 in most areas, though the camera on back is 4MP instead of 13MP. Technically, the One's megapixels are twice as large as normal ones, making them “Ultrapixels”. The greater size means they can capture more light, and the benefits are evident when taking low light shots; the One excels at these, and is overall faster with the shutter than the GS4. The resulting images aren't as crisp or detailed as the GS4, but plenty good enough for sharing on social media.

The deal breaker for me on the S4 is its size. It’s too big for my jeans pocket. Nor am I a fan of all the crapware loaded onto my HTC droid. Loading all of that stuff on my phone has seriously detracted from my customer experience. Now that my carrier has the iPhone, I’ll be taking a close look at it.

The crapware carriers are loading on Android phones is a real shame. Penny-wise, pound foolish in my opinion, as they make a little bit more from the crapware but lessens the appeal of the devices, meaning more discounting.

In any case, with Android you can largely get around the issue by “Hiding” the crapware apps. It doesn’t free up the storage they’re using, but it does remove them from the app drawer so they’re not clogging up your navigation.

Unfortunately, I have an older droid that is just about maxed out on storage. I’ve had to delete some apps that I’d have preferred to keep. This is a perfect example of a business that’s “organization-centric” instead of “customer-centric.

No loyalty from me.

This is the best smartphone yet to come

Check out the specs of the new Ubuntu Edge über smartphone / mini PC on the Indiegogo crowdfunding campaign @ http://igg.me/at/ubuntuedge/x/4139446

Samsung is a NO-NO

I’m sorry but i disagree samsung is the shittest phone on the planet. I had one and it had fallen to pieces bit by bit starting off with the camera and gallery. The OS is really crap and there is no upgrades or updates.

I will never again buy samsung, they should stick to what the make best - NOT mobiles but TV’s and VCR’s.

Things my husband did on my galaxy s4 after I went to bed.

He is involved in a third party site where he dials 100 of #s,and adds #s to these #s He’s uses my# my boys#s all my contacts my emails etc.I don’t know how in hell he does it. Most calls last about30secs.Hundreds of hidden texts.On my phone his phone and all 4 of my boys.He downloaded stuff on my apps Twitter’Flipboard, hangouts,g.voice, Google+his genitals in another woman on my gallery and lots of other stuff. Had to reset phone.all won’t fit in here.Its unbelievable what all he did.I could not sign in to Google. He kept changing my password. U.S . Cellular even set it for me. Never lasted 2days.Trip advisor, u tube fb, smemo, calendar, maps, my places, my page, China town, video etc.But I learned he was living a secret life and was not at all whom I thought.So my Android was my BEST FRIEND.IM DONE WITH THAT LYING (HABITUAL) PSYCHOPATH S.O.B.

You are sick and should get some help. Your Husband probably had a good reason to stray based on what I read in your comments!

Dave You're a man I

Dave You’re a man I suppose. I’m not sick. He is. You just don’t know. The Bible says he that is without sin let him cast the first stone. You only know what I told and believe me that was NOTHING! DON’T be so quick to act like you know about someone’s life when you have absolutely “NO IDEAL YOU probably have a lot in common with him You know nothing and you’re telling me I’m sick! Are you one his boyfriends? I wish I’d never posted on here.

Top 10 Smart phone in the world

Really nice post and i agree some of fact there, i love the way smart phones making mazing good enough i also make review if you like check it out
https://digitalinfo3.blogspot.com/2018/02/top-10-android-smart-phones-in-world.html
Top 10 Smart Phone and Best Android mobile right now to choose before buy.
https://digitalinfo3.blogspot.com/2018/02/6-best-android-phones-in-2017-to-buy-in.html
Thanks and keep it up.