Can you brew beer as easily as you can make a cup of coffee? LG says you can with a new gadget called the HomeBrew, which lets you make beer by inserting a few pre-packaged capsules into a machine. While we've seen some beer-centric kitchen gadgets — like the Fizzics Universal Beer System, which promised perfect draft pours from home — we haven't seen anything quite like this connected beer-brewing appliance. The HomeBrew takes the hassle out of watching the time and temperature — all you have to do is add pre-measured ingredients and press a button. And as it works, an app lets you monitor the process every step of the way. But there's really no need to babysit the HomeBrew, which uses an optimized fermentation algorithm to ensure the process is perfect.

But you can't rush beer-making. Even though the HomeBrew handles all finicky details, brewing beer still takes time. It takes two weeks to brew a batch, which can be up to five liters — or about 10 pints. If you're brewing drinks for your next party, that's not really a lot.

Still, it's quality over quantity, and the LG HomeBrew is designed to brew premium beer with perfect results every time. Different capsules — there's one for malt, yeast, hop oil and flavoring — will let you brew American IPA, American Pale Ale, English Stout, Belgian-style Witbier or Czech Pilsner. There's no need to experiment to get the right time, temperature or mix of ingredients — just put in the capsules for the drink you want, and wait. You'll get great results with every batch. 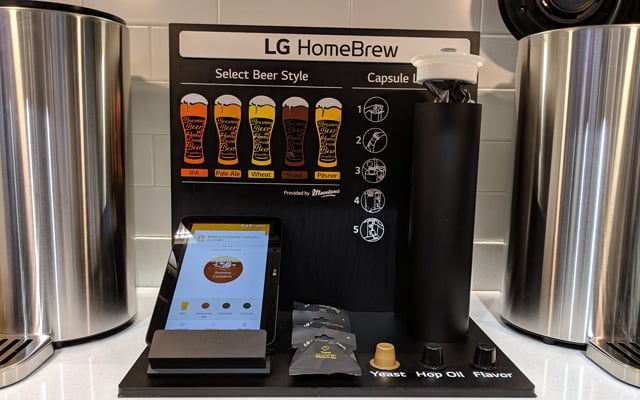 The HomeBrew even handles clean-up. When the batch is done, all you have to do is discard the capsules and the HomeBrew sanitizes everything with just hot water.

But the real question is the cost. LG hasn't announced pricing yet, but large, complicated appliance like this probably has a pretty large price tag, too. You'll also have to buy capsules for the machine, and we don't know what those will cost, either. Depending on prices, you may do just as well buying your favorite brew.

And yet there's nothing quite like drinking beer you've made yourself. The HomeBrew is due out later this year — watch LG's website for the details.