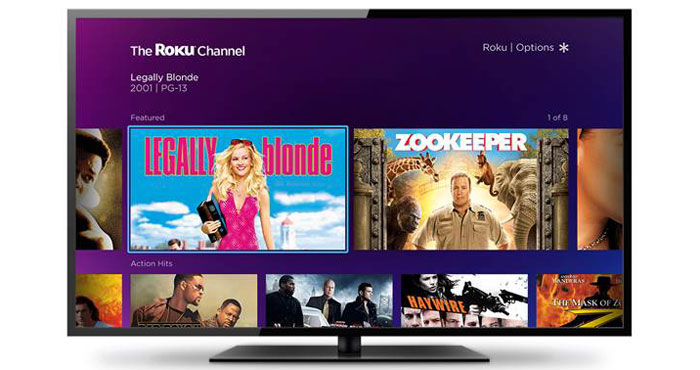 There's a reason Roku is our favorite streaming media player: it offers more content than any other player, with over 5,000 channels and 500,000 movies and TV episodes. More importantly, Roku offers the easiest way to sort through all of that content, with an unbiased search engine that lists all results by price — something you won't find on every player. But while Roku has always offered a platform for other services to stream from, the company is now offering its own content with the Roku Channel.

This new channel will be available on all current-generation Roku devices for free. Instead of following the subscription model of Netflix, the channel will include advertising. It should only see about  half of the advertising you would see on broadcast television, and watchers may be happy to give a little of their attention to advertisements in exchange for free content.

While Roku isn't producing its own content, it will be distributing quality entertainment from big studios, including Lionsgate, Metro-Goldwyn-Mayer, Sony Pictures Entertainment and Warner Brothers. (Though some existing Roku publishers, including American Classics, FilmRise, Popcornflix, Vidmark and YuYu will also be part of the Roku Channel lineup.) Roku plans to play award-winning movies and classics, launching with titles like Ali, The Karate Kid and Legally Blonde, all streaming on demand. You can expect a rotating selection of content, with new movies joining the lineup every month.

Roku won't be the only place you'll find these movies, but it has one big advantage over the competition: it's free and easy to watch on your television. If you're tired of watching free streaming content from a tiny computer screen (as with Hulu) and don't want to pay for another streaming service, the Roku Channel may be just what you were waiting for. (And if the new channel isn't for you? Well, it's easy enough not to watch.)

If the Roku Channel has tipped the scales on buying a Roku, you have a lot of options that fit any budget:

The Roku channel is rolling out to the latest Roku devices over the next few weeks, so keep an eye on your Roku to see when it shows up.

5 commercials in a row

One channel on Roku had a good movie on so I thought I would watch it.  It started with 5 commercials.  OK, got past that and 15 maybe 20 mins later, another 5 commercials.  That was it for me, uninstalled that channel.

Roku is pretty good, I’ve used it pretty much since they came out.  But if the free channels are going to give you from 10 to 20 commercials in 2 hours I’ll stick with Netflix.  Hopefully the new Roku channels will be better.

I hate the commercials, too. But this is just starting out - let’s see where they go with it. I don’t expect it to be cost free and commercial-free, so hopefully they’ll find the right balance.

Last night I watched part of Chariots of Fire on Roku, but tonight I cannot find COF on Roku to finish watching it. Is there a way to search the Roku channel by title?

While the Roku Channel doesn’t have its own search features, one of the benefits of Roku is the ability to search across streaming channels. So if you go to the main Roku Menu and go to Search, you can look up Chariots of Fire and link to the Roku Channel from there (I checked - works no problem).

Ait com link is the first company to link, activate and set-up your Roku com link device for smart TV. If you are facing any issue after installation, you can call for 24*7 to its team on 1-866-376-9956. They will resolve your all technical issues within time. For more details, click on given link. https://aitcomlink.blogspot.com/2019/01/roku-tv-and-how-to-install-it.html