TCL's new 6-Series models have more local dimming LED backlight control zones, an increase from 72 in both sizes to 96 in the 55-inch version and to 120 zones in the 65-inch set. The increased number of zones means more precise backlighting and less blooming, or leaking of light from one zone into another. This is especially important for HDR content. As with last year's models, the new 6-Series models support both the baseline HDR10 as well as Dolby Vision HDR.

TCL, now the #2 best-selling TV brand in the U.S. behind Samsung, has added a number of other features to boost color, contrast and consumer control. Inside the new 6-Series models is TCL's IPQ (Intelligent Picture Quality) engine, algorithms that constantly monitor performance to maintain color accuracy. TCL also has added new phosphor technology to widen the color gamut, and what it calls HDR Pro Gamma, essentially three levels of user-adjustable HDR contrast settings to compensate for ambient room lighting. There's "dark" for darker rooms, "light" for rooms bathed in sunlight, and "normal" for rooms with the lights on, all to enhance the details of a particular scene. 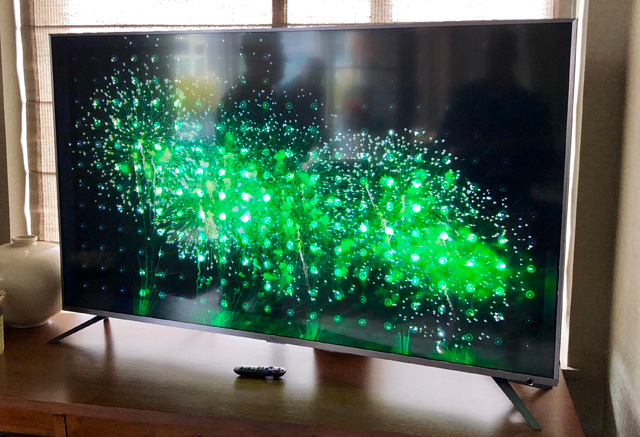 All of TCL's sets include Roku. But the new 6-Series models incorporate the latest iteration of the service including the Roku Channel, which includes 1,000-plus movie titles, along with the first Roku "live" channels that launched last September: ABC News with 24/7 news, Cheddar financial-focused news, PeopleTV celebrity news, and Newsy, which is described as news for millennials.

In addition, Roku has added a "continue watching" list for programs you haven't finished viewing and has created sub-"collections" categories to further parse major categories such as Thrillers, Drama, and Comedy to make it easier to browse and find the title you want.

Cheap? Doesn't seem cheap to me.

Indeed this TV may be inexpensive in today’s market but I still have a hard time understanding why the 60 inch, 5 inches larger than this model, Vizio model that I bought 6 YEARS AGO was more inexpensive by $28. Mind you there is a caveat in this statement. I bought this 60” Vizio at Walmart during their Black Friday sale but still that was SIX YEARS AGO.

Why are the prices of this class of TV still so expensive?

Jessie – What you bought six years ago was a standard HD/2K set, not a 4K set as these TCL Series 6 models are. The first 4K TVs went on sale around 2013 and were more than $10,000, so in just five years, 4K models have dropped to around the same price as HD/2K models were six years ago.

An even bigger saving?

I spoke to tcl. They said this model, https://www.tclusa.com/products/home-theater/5-series had the same picture quality. I asked what the money difference was for and was told its only the TV stand. The 5 series is $499, the 6 series is $649. Seems a lot for a different stand/feet. Am I missing something here, did the phone person mis-speak?

the same glass, not "picture quality"

Robert – The TCL person didn’t define their terms, or misspoke. The Series 6 sets have the same RESOLUTION as last years model, 4K, not the same picture quality – these are two different things. These new Series 6 sets, as the article notes, have better backlighting, better color, better HDR controls, and better Roku software amongst their primary improvements over last year’s models. Plus, the pricing on the Series 5 models you see is now discounted from their original prices, which were pretty much the same as last year as this year’s models.