3D Sports - Thrill of Victory or Agony of Defeat?

Everyone from TV manufacturers, to broadcasters, to cable providers has been touting sports as a key reason why we should want a 3DTV. And this week, I was invited to the screenings of two major sports events in 3D—the College Basketball Championship game with Duke vs. Butler and the Masters golf tournament—to check it out.

Yet, from what I've seen so far, 3D sports is going to be a big disappointment unless the broadcasters get their act together on how to shoot sports properly in 3D. 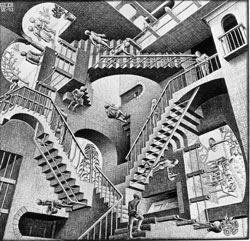 With both the basketball and golf broadcasts, the 3D cinematography made the events uncomfortable to watch. Players running down the court were blurred, with legs that occasionally seemed to overlap each other in anatomically improbable ways. Crowd shots in both the golf and basketball screenings seemed unnaturally deep, almost "over 3D'd".

But the worst transgressions were foreground items (e.g. tree leaves or falling buds) at the Masters that were out of focus and on-screen graphic images at the College Basketball Championships that wove in an almost M.C. Escher like fashion through the crowd; each completely ruining the 3D effect for me.

And my reaction was typical of others I talked to at the screenings. Many went so far as to describe the experience as "nauseating" or "painful"—not what the 3DTV proponents want to hear.

There were glimmers of hope, however. The camera shot looking down from above the basket was terrific, as were greens shots in golf. When the camera angle works, it works very well.

What 3D sports needs is a visionary who can rethink from the ground up the way sports events are shot, like James Cameron did for 3D movies. There is still plenty of time to snatch victory form the jaws of defeat.

Josh - this is so interesting.  Thanks for the great insight and recap.

I have heard the predictions that 1/3 of TVs sold in 2010 will be 3D-capable.  (Surely that’s largely because folks are planning for the future and don’t want to buy something that will soon be obsolete, not because everyone wants to sit down with glasses each time they turn on the TV.)  Your experience puts it in perspective.

From the standpoint of camera-people needing to learng new angles and techniques, that’s going to be an exciting new frontier for them, and I’m sure we’re all in for a show as we watch the content rapidly adapt and improve!

I’ve never been a fan of the idea of 3D TV (Wear goggles in your own home to give yourself headaches? What’s the point?) and now hearing that they can’t even get sports right I feel vindicates my view. What, if nothing else should be the ultimate 3d TV experience if not sports? Feeling as if you are in the game (or at least in the stands) If they fail at this I think the whole concept is moot!