by Suzanne Kantra on May 12, 2010
in Cameras and Photography, News, Cameras, Digital SLRs :: 0 comments 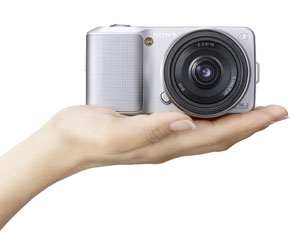 Digital SLRs are the fastest cameras on the market, which is why I often suggest them to parents of small children. Unfortunately, the compact models (commonly referred to as "micro four-thirds", because of the sensors) have sacrificed some speed in favor of size. Sony’s NEX-5 and NEX-3, announced yesterday, have no compromises; delivering standard-size performance in a compact body.

Both cameras use an APS-size sensor— which is about 60 percent larger than the micro four-thirds image sensor used by other compact cameras— that records 14.2MP stills and HD video. And while capturing video, the camera provides continuous autofocus and exposure compensation, a rarity among digital SLRs (NEX-5 captures Blu-ray format AVCHD files and mp4 files. NEX-3 just captures mp4 files).

And if that weren’t enough, both cameras also capture 3D images in 3D Sweep Panorama mode. The resulting .mpo files can be viewed on 3DTVs that support the file format. And you can get 3D prints made at SeeHere.com.