BlackBerry's new smartphones, the touchscreen Z10 and the keyboard-bearing Q10, will be the first two phones out of the gate for the company's big BlackBerry 10 push. With these devices go the fortunes of the company, and they represent its best foot forward. Are these devices worth waiting for when they release in March (Z10) and April (Q10)? My first impressions are mixed. 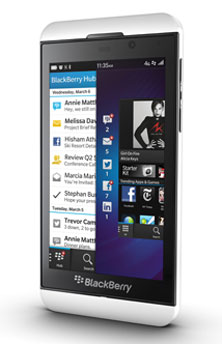 The BlackBerry Z10 is an all-touch smartphone with a 4.2-inch, HD display. The design and dimensions bring the iPhone 5 to mind, and I'm sure that's on purpose. Holding it is a different story since the soft-touch, textured back is more grippable than slick glass and the curve at the edge makes it overall more comfortable. It has a nice weight, good balance, and is still usable with one hand.

Inside, the specs aren't going to set the world on fire, even backed up by Alicia Keys. However, tons of raw power is less important than handware and software that work together efficiently. As long as it's fast enough to support the operating system and apps, the phone doesn't need to be super quad-core. So far, this appears to be the case.

BlackBerry 10 runs smooth as silk on the Z10. The interface design is straightforward and easy to understand yet not too simple or stark. Coming from iOS or Android, some of the unique aspects take getting used to. No Home button, for example. Plus the different gestures. Getting the hang of these didn't take long and, once learned, make navigating the phone feel efficient. I guess that's why they call it Flow.

The BlackBerry Hub is the core of the operating system and important enough that it can be reached from any app or any screen with a simple gesture. It pulls together all messages – email, BBM, Facebook, LinkedIn, and more – into one unified Inbox that somehow doesn't end up looking like a disorganized mess.

Still, no matter how much the BlackBerry Z10 looks like it belongs on the same shelf as an iPhone or Android handset, some aspects are only available to the enterprise set. One feature much touted in the big launch presentation is BlackBerry Balance, which allows owners to separate work and personal. You get two profiles, and each has distinct properties. The Work side has a different app store (controlled by the IT manager), the Personal side is marked by different wallpaper. Thing is, Balance is only available to business users whose companies use Blackberry Server 10 to manage the devices. If you're an independent contractor or a small business unwilling to spring for the server, you can't take advantage of one of the most interesting features.

Things like this show that BlackBerry is more concerned with winning back its core audience and not necessarily grabbing up mainstream users. That's likely a good strategy for the company, but the impression they give with the Z10 is mixed at best. 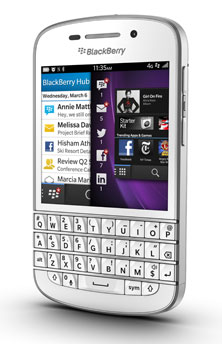 But then there's the BlackBerry Q10. I didn't have as much hands-on time with this phone as I've had with the Z10, but I now feel that the Q10 is going to be more emblematic of BlackBerry going forward due to the mixture of old and new. The Q10 has the physical keyboard, an important inclusion for some. Even though the Z10's on-screen keyboard is fast and provides flickable predictive text, for some only real, clickable keys will do.

The keys on the Q10 feel great; easy to press without being mushy and just enough spring to keep you moving. Keys are straight across, no longer curved, yet are large enough and have enough space in between for accurate typing. The predictive text engine is available on the Q10 as well. Words float above the keyboard where you can tap to choose. Tapping is a little awkward, so unless you can construct most of the sentence using this feature, heavy messengers will probably be faster just typing.

Blackberry 10 doesn't suffer from being on a smaller screen – 3.1-inches – and flows just as well as on the Z10. The Hub is even more important on this phone since the people who want it likely do because they message a lot.

Out of these two phones, the BlackBerry Q10 feels more likely to impress individuals curious about the brand. There are a million touchscreen phones available but not so many with a good physical keyboard. The BlackBerry Z10 could still find a place within the core BlackBerry base.