Bose VideoWave is a Major Leap Forward in Surround Sound 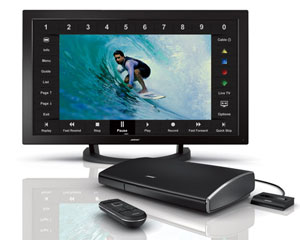 It would be easy to classify the new Bose VideoWave system as simply an LCD TV with built-in surround sound. But to do so would not do justice to the truly amazing surround experience Bose has created. You really have to hear the VideoWave in person to appreciate what this TV can deliver.

Bose achieves the magic with a combination of six woofers and seven speakers using a new technology Bose is calling "PhaseGuide" to direct sound to the top and sides.

The best way to understand how PhaseGuide works is to think of it as a laser beam of sound. As these very narrow beams reflect off walls, ceilings or other hard objects, you perceive the sound coming from that direction, creating a very precise surround sound effect.

Interestingly, the PhaseGuide technology was originally developed by Bose as an audio walking stick concept for the blind. But it is certainly being put to good use in the VideoWave system.

Beyond the surround sound effect, the audio quality of the VideoWave wasn't hugely impressive. Better than other built-in TV sound systems—most definitely. But sound was muddier than what you would get in a decent standalone home theater system.

The second standout piece of the VideoWave system is its "click pad" remote. Recognizing that most people have way too many remotes on their coffee table (guilty as charged, I have six at home), and that most universal remotes are saddled with more buttons than the Space Shuttle, they created a simple scroll-wheel concept that will be familiar to anyone who has used an iPod.

The Bose click pad creates on-screen menus that are context-sensitive based on the device you're using. Switch to your Blu-ray player, and the controls on the screen change to reflect the Blu-ray player's menu. Listen to music on your iPod, and the menu adjusts again to simulate your iPod's menu controls.

All the choices on the Bose click pad are controlled with a touch-sensitive wheel (albeit a square wheel), keeping the remote itself as simple as possible. It's a great concept, and I wouldn't be surprised to see other manufacturer's copy it shortly.

So far, so good. But everything is not perfect in Bose land.

The biggest disappointment is the TV itself. It is a 46" LCD panel, running at 120Hz with 1080p resolution. There are no other sizes available and the average picture quality isn't going to win any awards. I would really have liked to have seen an LED-backed LCD or, even better, a plasma option.

Plugging in your components is done through an external control unit. The control unit plugs into the TV with a single cable. If you have many peripherals—Blu-ray player, cable box, Xbox—the control unit will reduce the number of wires you have going into your TV. On the other hand, it's one more box taking up space in your entertainment area, and it isn't small.

Finally the price—$5,349. Yes, you heard that right. The great sound and universal remote add a $4,000+ premium to the price of the basic LCD TV.

Now that price includes white glove setup in your home, including setting up all of your components, calibrating the surround sound for your room and giving you a walk-through of all the features. But still, $5,439? Ouch.

Pop these features on a bigger, better panel and sell it for under $4,000 and I would highly recommend it.

The Bose VideoWave will go on sale Oct. 14 and will be available only through Bose retail stores.