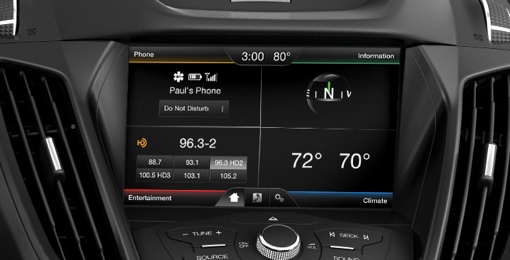 Ford is about to apply the over-the-air software update model to its vehicles. On Tuesday, the automaker announced that it is partnering with Microsoft to create a cloud-based network that will offer regular updates to its vehicles' multimedia systems.

The latest generation of Ford’s Sync3 multimedia system will be the first to get update functionality, available in some 2015 models. The system will be available across the entire line of Ford vehicles by the end of 2016. Since Ford vehicles do not yet come with in-car wireless modems, Sync3 will update when connected to the cloud via Wi-Fi. Ideally, this will happen when it’s connected to your home network when parked in your garage or driveway, though you can also rig the system to update over your mobile phone.

Having an updatable multimedia interface is an important feature for car manufacturers as more of us drivers seek to connect our phones to our cars to access more features. Older in-dash systems – including those from Ford – often have problems connecting to modern phones. Further, they’re often unable to utilize new phone features like voice recognition. Without over-the-air updates, your only options for upgrading your car’s connectivity are swapping out its existing head unit with a new one (which can be prohibitively expensive) or trading in your vehicle outright.

Ford’s Sync3 multimedia system will be competing directly with in-dash offerings from Apple, Google and Microsoft. Apple’s CarPlay (formerly named iOS in the Car) offers an Apple-designed in-dash experience including Maps and Messaging and is currently available in select car models across a wide range of vehicle manufacturers. Google’s Android Auto offers a similar Android-esque experience with Google Maps for a number of vehicles. It is currently available on a highly limited basis. Microsoft’s Windows in the Car is designed to work with both Android and iOS phones, but it won’t be available for a while.

You can learn more about the Sync3 multimedia system by visiting the Ford website.