The Future of Television – Smarter and Brighter 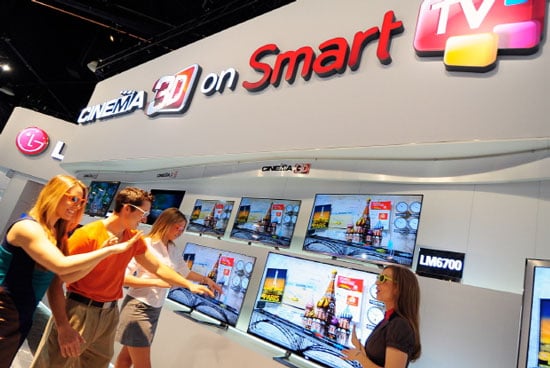 Consumer electronics manufacturers want to sell you a new TV – they always want to sell you a new TV. But the problem is, today’s sets are built so well, they rarely need to be replaced. What’s required, then, is a compelling new feature that will make you sneer at the set you own and lust after a brand new model. They tried 3D, but there aren’t a lot of people tossing out an existing high-def set for the privilege of wearing goofy glasses and watching limited 3D content.

Smart TV was a big story at last year’s CES, but it’s now being refined and improved in significant ways. First things first: what makes a TV “smart”? It’s the same qualities that make a phone a smart phone – connection to the Internet, and the ability to run apps.

At this year’s show, we’re seeing an expanding range of content appearing on upcoming Smart TV models, including more opportunities to purchase or rent online video content and expanded children’s programming. Full-fledged web browsers are also becoming more common. Samsung will now have a browser and Wi-Fi connectivity in all is smart TVs, and add support for HTML5 and Flash missing in previous models.

LG, Samsung and Panasonic also showed preliminary demonstrations of systems that turn your TV into a multi-screen system, combining with a tablet or smartphone to both display content on several screens at once and/or use the handheld devices for input and control of the TV.

Another interesting new trend in Smart TV is an effort to make it easier to control. Trying to navigate through extensive online content and apps using a traditional remote control is beyond frustrating. Both LG and Samsung introduced new control schemes that borrow heavily from the Microsoft Kinect system available for the Xbox 360 game console. Voice control will be available to search through smart TV content and control the TV set. Hand and full-body gestures will also be used, both for controlling the TV and for playing games. The Samsung version will even have face recognition, so it will pull up your own favorite apps when you sit down in front of the set.

Is all this easier than reaching for a remote control? That remains to be seen, but at least you won’t be stuck on a channel if the traditional remote disappears in the couch cushions.

As for taking an odd step toward smart TV supremacy, Panasonic brought out none other than Justin Timberlake to promote its exclusive launch of MySpace TV, a system that lets you communicate with your friends while watching TV or video “together.” (Timberlake, it should be noted, is a major investor in the attempt to revive MySpace.) The idea of combining TV watching with ongoing communication may have legs: we’ve seen it implemented in baby-step ways via apps, and in Google TV’s hangouts. However, it’s going to be tough getting together with your friends on MySpace, when they’re all hanging out on Facebook.

There was more good news for fans of the TV-online connection: despite reports of its demise, Google TV lives. In its first incarnation, Google’s software for bringing apps and online content to your TV screen had limited capabilities and high prices. Recently, though, a major software update brought an improved interface and added an Android Market where new apps can be downloaded to the system from outside developers. It’s probably no coincidence that LG just announced it would start shipping Google TV-equipped sets, Vizio introduced its first Blu-ray player using the software, and Sony promised a second generation of Google TV gear, along with an improved remote control.

The last great flood of TV sales came when we switched from standard-def to high-definition TV – anybody who looked at the two side by side was immediately struck by the vastly superior picture quality of HD. At CES, we saw three large-screen sets that retain the same resolution as current HD, but deliver image quality that is clearly a huge step above current plasma and LCD sets, with jet-black backgrounds, high-contrast images and colors that seem to pop. And for a little extra goodness, these sets are lighter, thinner and less power-hungry than current HD sets.

Both LG and Samsung showed sets based on OLED technology that’s been around for a few years, but limited to smaller screen sizes (such as cellphones and digital camera screens), and one impractical 11-inch Sony TV that was sold for $2500. LG and Samsung premiered 55-inch OLED TVs at their press conferences. Displayed on the same stage, their top-of the-line current-generation HDTVs looked like antiques. Of course, there’s still a lot we don’t know about these OLED sets. LG said nothing about price or ship date. Samsung left price out of the equation, but said their set would ship this year. We shall see, but the ability to manufacture full-size OLED TVs has at least been proven.

Meanwhile, Sony continues to develop OLED, but also showed off a rival technology at its press conference called Crystal LED with its own 55-inch model. While there are technical differences between Crystal LED and OLED, they share the deep blacks and intense colors that make us drool over next-gen TV. Here again, pricing and timing are open questions, but it’s a technology worth following in the coming months.

Well it seems to me that smart tv’s may go the way of 3D, or the so called smart Refrigerators of a few years ago.

When I turn on my HDTV I do so because I want to watch TV or a movie, not because the tv might have 3,00 widgets and a web browser!

it makes me re-think about smart TV and all the techology coming to a near future when:

F-bombs, bare breasts and rudeness at its best could be coming from a network TV to your home ...

The Supreme Court on Tuesday began hearing arguments in a case that could rewrite the rule book for Fox, ABC and other broadcast stations now prohibited from pushing nudity and profanity on the public airwaves….