Michael Tripoli was 16 years-old when he had a massive heart attack while playing football. Medical responders didn’t give him oxygen because they thought he was having a seizure. As a result, he received global brain damage that severely impeded his ability to move and communicate.

To keep his brain engaged his rehabilitation doctor purchased for Michael the Star Wars Force Trainer, a game that uses a brainwave-reading headset to let players levitate a ball by concentrating.

NeuroSky, the company that makes the brainwave reading chip in the MindWave headset and in toys like Mattel's MindFlex Duel ($69 on Amazon.com

), believes it can be used for more than playing games. What if someone were to develop an application that would use the headset to help people like Michael communicate? What if he could focus to select letters to display words onto a screen, for example?

So far, software developers haven’t created therapeutic apps for the NeuroSky headset. Obviously, it's infinitely easier (and more profitable) to make an Angry Birds or Words with Friends than an app that deals with reading brainwaves for a niche market. 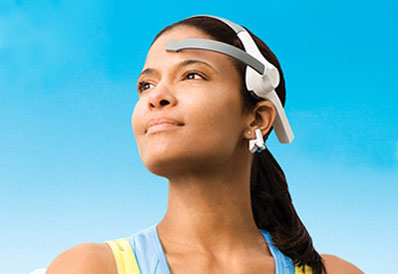 NeuroSky already sells an inexepensive headset for Windows PCs, the MindWave Education ($99 on Neuorsky.com). This month the company is expected to release a version that's compatible with iOS and Android devices, so the brainwave-reading technology will be accessible to more people than ever. And because Apple already offers many assistive technology functions on its devices, NeuroSky believes an inexpensive brainwave input device like its headset will bridge the gap needed to help people with conditions such as Traumatic Brain Injury, Cerebral Palsy, Multiple Sclerosis and Amyotrophic Lateral Sclerosis.

By combining brainwave input such as blink, attention, meditation, and raw electroencephalography with mobile features such as geo location, accelerometers, text to speech and video, NeuroSky believes developers can provide new and unique capabilities for Android and iOS devices that can help people like Michael Tripoli. Since developers aren’t stepping forward on their own, NeuroSky has launched a campaign on the crowdfunding site IndieGoGo to raise $50,000 that will pay top-tier app developers to create a new type of user interface for assistive technology applications on mobile devices.

“On a weekly basis I speak to family members seeking solutions, who have loved ones with these conditions. While a long way from a total solution, we know there is potential for our technology to be used as a very basic communication device,” says NeuroSky’s Head of Communication Tansy Brook.

To contribute to NeuroSky’s crowdfunding efforts, or to watch a video of Michael using the Star Wars Force Trainer, visit the company’s “Trapped in my Mind” page on IndieGoGo.

I feel this would help so many people out in a great way. What a fantastic idea!

Giving speech to the speechless?

What an amazing device! How wonderful it would be for people who have lost the power of speech to be able to communicate again! I spent several years working in schools with handicapped children, and attended 2 children with cerebral palsy, neither one of which could speak.  Something like this device would have been very useful.  You could look into their eyes, and see the wheels turning, but they had no way to communicate and tell you what they were thinking.  I always did wonder what kinds of thoughts were trapped inside, and something like this could’ve let those thoughts out!  Here’s hoping they get the funding to get it fully developed!

I just viewed the video and all I can say is Wow!!! I have a friend who recieved a traumatic brain injury in an auto accident, and something like this may just help her. I want to get one of these devices for her.

My friend was in an auto accident also. It happened 3 years ago and unfortunately doctors believe she will always be in a semi-vegitative state. Could this help?

Talk to your doctor

Everybody’s situation is unique. Your friend’s doctor(s) should be able to provide guidance on whether devices such as this may be helpful for her specific issues and condition.