Skype Video Calling is Coming to your Living Room TV 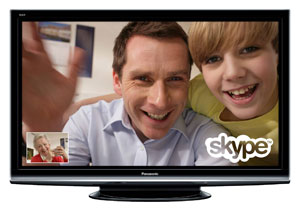 Straighten up the living room and invest in a nice robe, Skype video chat is coming to TVs this year.

Panasonic and LG have shown compelling demos of Skype high-definition video calling capabilities integrated into their next-gen net-connected TVs, which are due later this spring. The webcam itself is not included. You'll then have to buy a Panasonic- or LG-specific webcam, each of which will have four built-in microphones, probably for around $100. 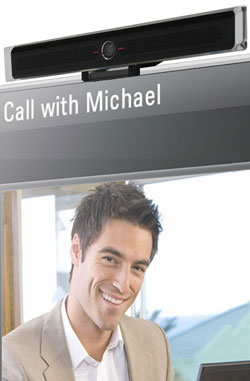 But these extra add-on webcams are a temporary solution. By the fall, expect to see a growing number of high-end TV models with a webcam and microphone array built into the bezel, just like built-in webcams are now standard equipment in laptops. Toshiba, for instance, has announced that its CELL TV will include a built-in webcam, though the company hasn't said it's using Skype's videophone service. Yet.

When making a call, you can sit up to 15 feet away from the TV and talk in a normal tone of voice. Echo-cancelling eliminates you hearing your own voice coming back through the TV's speakers, and the mics can handle full duplex conversation – meaning you can talk over someone without the sound cutting out.

TV webcams can "see" three or four people sitting on a sofa, depending on how far away from the camera you are. When a call comes in, you have the choice of ignoring the call, answering only with audio in case you're not video presentable, or with 720p video.

The only thing missing: a video answering machine, but then it's still early in this new video calling age.

I can’t wait to see this product available!

In fact I just posted your article on my personal facebook.