Wisear Earbuds Will Have Hands-free Controls

Earbuds with touch controls are handy – unless your hands aren’t free to tap on the bud to answer a call or control music playback.

A company called Wisear has created a brain-sensing “neural” earbud control technology that, via simple face twitches, lets you answer phone calls or pause/play music without having to touch your earbuds or smartphone. This hands-free earbud control will be included in Wisear’s own new Perceive Bluetooth earbuds, which are due to be released later this year or early in 2024.

According to Wisear, this “Bewitched”-like face control technology decodes brain and facial activity straight from your ears. The first generation of the company’s neural technology will include two controls based on facial muscle activity. At CES, we saw a demo, and movements were subtle – jaw clenching in rapid succession. The prototype the company was using for demos was much larger than the product rendering in the picture below. 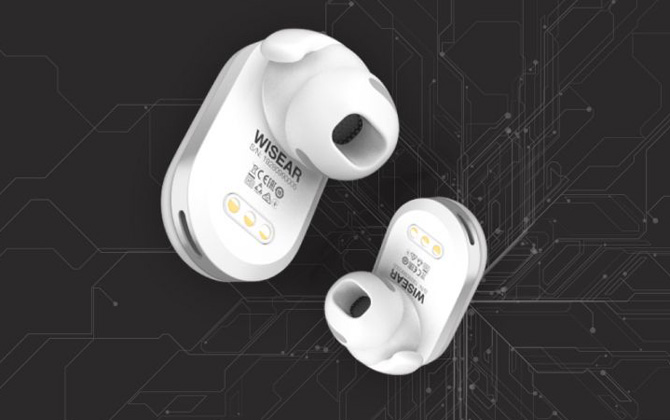 By the end of this year, new controls based on your eye activity will be available. Then, next year, the first features based on brain activity will be added. Wisear aims to create a portfolio of interface controls “enabling all the main actions in our digital life,” according to the company.

Wisear CEO and co-founder Yacine Achiakh believes his company’s neural controls can be widely applicable to other gadgets and technologies, such as AR/VR headsets and next-generation human-computer interfaces.

“We want to become the keyboard and mouse of the digital experiences of the future,” says Achiakh, who co-founded Wisear in 2019 with Alain Sirois, a neurotechnology and neural interface researcher and developer. “This revolution will not happen until we can totally reinvent the way humans interact with their machines, in the most natural way possible – hands-free, high speed, accessible for all and at all times, without the limitations we are already experiencing with text, click and voice.”