While the first crop of Nintendo 3DS games did a better job of showcasing the system's potential than wowing us with their gameplay, there are a handful of titles that are worth purchasing. Here are our picks. 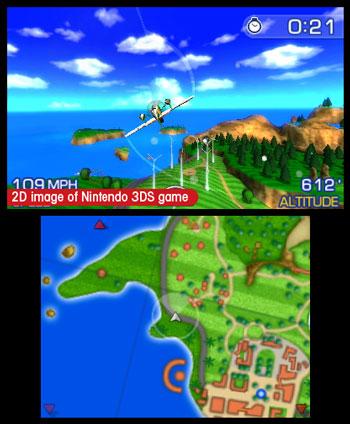 Fans of the films Avatar and How to Train Your Dragon know that flying is a great way to show off the 3D effect, and that’s precisely what Pilotwings Resort offers. You fly around using different vehicles – a prop plane, a hang glider and a jetpack – trying to navigate obstacle courses, find hidden treasures, win races and land safely. Soaring above a tropical island suspended in a hang glider, swooping from here to there, it’s easy to get immersed in the 3D game experience. Since 3D gives you a better sense of objects’ position in space, it even adds something to the gameplay, a rarity in 3DS titles so far.

The other key 3DS feature that Pilotwings Resort uses exceptionally well is the analog thumb controller. You’d never be able to manage the smooth movement and precision the game requires using the old button-style controls.

Even with three different flight modes, there isn’t a ton of variety in the missions you’ll tackle. However, even after completing every challenge once, there is enough opportunity to improve scores and try out new pathways to encourage many hours of replay. Price: $39.99 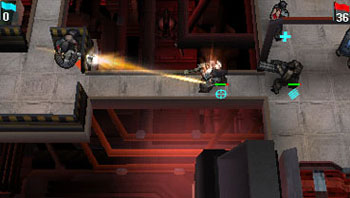 A test of your tactical skills rather than your reflexes, this military strategy game has depth, polish and style to spare, even if the 3D is just window-dressing. As in a game of chess, you take turns against the AI or a human opponent, maneuvering your troops around a complex environment viewed from a top-down perspective. The terrain is varied, with opportunities to take cover, high ground that offers an advantageous shooting position, and much more. You have to scope out the battlefield, looking for a clear line of fire against the enemy while minimizing your own vulnerability to attack. In addition to variations in the environment, there are six different classes of soldiers, from sharp-shooting sniper and deadly commando to a tech-savvy engineer and an invaluable medic, each with his or her own strengths and weaknesses. And as you play, weapons and abilities are enhanced, adding further variety.

In a game like this, there’s a fine line between having fun and working too hard micro-managing your forces. Ghost Recon: Shadow Wars gets it just right, with a gentle learning curve that introduces new features at a reasonable pace, and the option to choose one of three different difficulty levels at the beginning of each mission, so you’re less likely to get stuck.

There’s not much that’s distinctly 3DS here – multiplayer requires passing the console back and forth, with no wireless option, and the analog control is barely used – but Ghost Recon: Shadow Wars is still the most absorbing of the system’s launch titles. Price: $39.99 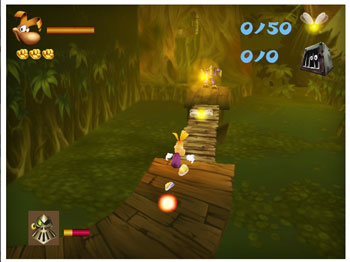 The closest thing to Mario-style running-jumping-shooting-clobbering action among the initial batch of 3DS games, this isn’t strictly speaking a new game – it’s basically a 3D reworking of Rayman 2, which was originally published for the Sega Dreamcast in 1999. The word “classic” is entirely appropriate here, though, making this a great opportunity for first-timers to explore the Rayman universe.

The title character is a charming little guy of unknown species who’s trying to save his friends and his world from a horde of robotic pirates by collecting glowing spheres called lums and other hidden objects. No, it ain’t Shakespeare, but plot is never a strong suit in this kind of game. What makes Rayman 3D work is handsomely crafted, colorful worlds to explore in many different ways. You may be climbing vines one minute, swinging from platform to platform the next, and then find yourself dodging obstacles while waterskiing behind a sea serpent. The analog control works nicely, and the 3D effects are cool if not captivating. There are some moments when camera positioning proves aggravating but, overall, Rayman 3D holds up surprisingly well. Price: 39.99 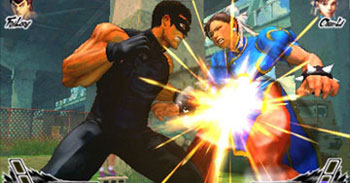 I’ve never been a big fan of the 2D beat-‘em-up genre, but there’s no denying the justifiable excitement enthusiasts feel for this feature-packed version. An impressive 35 characters are available for combat, each with distinctive moves to master, weaknesses to exploit and larger-than-life personality. The cartoon animation is fast, fluid and undeniably entertaining. Button-mashing will get you through a few combat levels, but it soon takes skillful combinations to conquer your foes. Fortunately, the developers came up with a clever use for the bottom touch-screen, dividing into four rectangles, each of which unleashes a multi-button combo with a single press. This makes up for the difficulty working with the small buttons on the 3DS, and enables relative combat newbies like myself to dish out some pretty spectacular attacks.

The game also gets high marks for its full use of the 3DS system. Head-to-head play in the same room and over the Internet is supported, you earn bonuses for carrying your 3DS around using the system’s built-in pedometer, and with the 3DS in sleep mode, you can interact with nearby players wirelessly using the StreetPass system.

With the combination of pick-up-and-play action and the opportunity for more sophisticated, tactical maneuvering as you gain skill, Super Street Fighter IV 3D Edition has broad, long-lasting appeal. Price: $39.99