How to Fix NVIDIA Resolution Problems in Windows 10

After upgrading my PC to Windows 10, I found that I could no longer set my Vizio VMM26 monitor to display the correct resolution. Instead of my monitor's native resolution of 1920x1200 (16:10 aspect ratio), the only option Windows Control Panel would allow was 1920x1080 or 1280x720 (16:9 aspect ratio), stretching every circle into an oval and generally looking like crap.

Where was my previous 1920x1200 setting? Why was I suddenly experiencing this problem? Hours searching online indicated many others were having the same issues, but no one had a solution.

It turns out the culprit was not Windows 10, but the updated Windows 10 compatible NVIDIA software that downloaded alongside it. When I reverted back to the old NVIDIA software and driver, things worked again. All was good until I inadvertently updated the NVIDIA software again during a Windows update, causing my monitor resolution to return to stretch mode.

Determined to find a better answer this time, I delved into the NVIDIA Control Panel (Version 8.1.X) to see if it would provide more options than I could access through WIndows settings. And in the Control Panel, I found the solution. 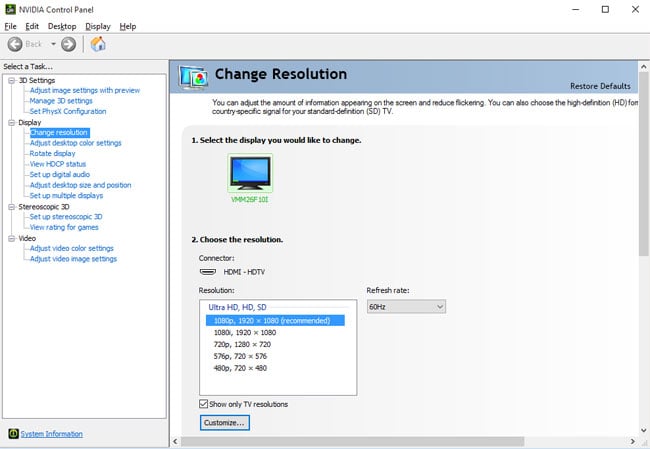 So why did NVIDIA do this? My guess is that they thought they were making life easier for users by only providing the 16:9 ratio options found in the newest monitors and laptops. Unfortunately, for those of us with less common or older displays, that decision results in a corrupted display and no obvious means to resolve it. This is a case where defaulting to more user choice would have been the better approach.

Hi,
You may have updated your driver recently, to find out that nvidia apparently has removed that so useful checkbox. That’s what I see on my computer at least, and I found at least one other guy complaining on nvidia support forum - recently, and unsuccessfully. Is it the same for you? Any other idea than trying to make nvidia hear us?
Besides, thanks for the nice article. Hopefully the tip will be re-enabled soon!

I spent 2h trying to find why this happened. thanks!!

The “Show only TV Resolutions” is missing from my Control Panel as well.

What version of NVIDIA are your running?

I’m running version 8.1.860 of the NVIDIA Control Panel. Which version are you running? Are you sure you aren’t overlooking the Show only TV resolution checkbox under the resolution options?

Hey, i hope this will help some of you if you still have the same issue. My monitor Viewsonic VA 1916w, native resolution 1440x900 65Hz. Suddenly yesterday this resolution didnt worked out anymore, my max refresh rate according to windows (10 Anniversary) was 82 and thats it, Before was 65-75.

The main problem was that the display was larger than my monitor dimensions, When i had full open app windows i was loosing the upper side of them and didnt see the minimize/maximize/close part.

Itried lot of things, completely remove and reinstall drivers (with DDU at safe mode) both for my Nvidia Geforce GT710 and my monitor. I even REFRESHED WINDOWS !!!! Nothing was working and finally before some minutes i found the solution. Here it is.

Underneath is the Timing dialogs and check boxes. At the Standard dialog box Automatic was chosen by default. That was the trick !!! I CHOOSED CVT or CVT reduced blank, i hit the “test” button and VOILA!!! everything was perfect again… !!!!

I hope it will work for u too.

ps. Forgive me for my bad english, usually i read forums not writing in them but that was soooo annoying and time consuming issue so i wanted to share the solution with you :D

Thank you for the info

Always helps to share these tricks as someone, somewhere is likely facing the same issue as you are.

For some reason after the update for windows, my computer started using 30 hertz for no reason. This actually fixed it. Thank you again.

Woooow, you helped me a lot Luna. Thank you so much. The CVT or CVT reduced blank changed everything.. lol. Cheers!

Welcome friend. Im happy i helped you out for the solution. Cheers.

This worked for me

Thank you. This realy helped me out.

CVT reduced blank did it

You saved my life.

CVT was the answer I needed

Thanks very much for the CVT suggestion; that was the key to getting my Dell XPS with NVIDIA graphics to recognize my Monoprice high res monitor.

Hi Luna,thanks for the post. Had same problem, 1440x900 resolution was missing. I created it as custom resolution and selected CVT and it worked.

YOU ARE A GOD

This was the only one solution that worked for me too

Thanks man, I followed your steps and everithing is working fantastic!!

THANK YOU SO MUCH!!!! WORKING

THANK YOU SO MUCH!!!! WORKING GREATLY!

Sir, you have completely solved my problem in 30 seconds. Thank you so much.

Thanks for the great advice

Thanks for the great advice it just worked for my gtx 650…. I appreciate the help

I’ve been trying to fix this for like a week! installing reinstalling drivers etc. I thought my videocard or monitor was starting to die. It was able to detect my native resolution before and i just changed the friggin’ cable to a newer one then it stopped detecting it properly.
This greatly helped because my drawing tablet relies on my monitor resolution. Thanks alot!

the ‘show tv resolutions’ is not an option in this version.
Ive manually created the customized size (as comments above), trying all the automatic, CVT, etc etc options.
Once saved the new resolution, I try to implement that change using the display settings - advanced display settings, I click the new resolution option, then apply, and a red message displays saying ‘Windows could not change your display to this resolution. Try a different resolution’

This worked for me:

I basically manually resized the width and length of the resolution in the control panel> display> Adjust desktop size and position. I went to the size tab and checked “enable desktop resizing” and clicked the Resize… button. A screen with green arrows in the corners popped up and I adjusted the size of the desktop using the sliders. I hope this helps!

Well, i have an old VGA samsung syncmaster,
and it was working fine with resolution 1440x900
until i unplugged it and shifted it to my new desk. after i plugged it back in, all the text has become SLIGHTLY FUZZY , and it just dosent look right to me.
windows(and nvidia) say the res is still 1440x9000 @ 60kHz but my monitor says its 1680x1050 @ 65.2 kHz

and when i get rid of my graphics card , all is well and the monitor says that the resolution is optimal @ 1440x900 @60 kHz and so does my computer

This worked - I could

This worked - I could kiss you

What the bloody hell !

But a simple handshake will suffice!

After a windows 10 update I got my monitor stuck at 1024*768 and after days searching what it is was, this helped!

Glad it helped you, too!

Games take too long to start.

Hello, few weeks ago i updated to windows 10. My graphics card is nvidia 950. Just after i updated my windows, all the games take too long to start. i don’t think it’s the problem with the games cause i can hear the game music in the background. it’s my display that’s causing some kind of problem. the screen keeps changing it’s resolution or something. anyone knows how to fix it? thanks

Make sure your screen resolution and refresh are correct

In the NVIDIA control panel, as well as in your game settings and Windows display adapter settings, make sure your screen resolution and the monitor refresh rate are set to the proper settings. I suspect it may be the refresh rate that’s off, rather than resolution here.

Had similar issue on my old LG FLATRON W1934S monitor, this rly helped, had figured it out myself till the timing part, that really helped thank you.

Customize not an Option?

I have a Samsung Syncmaster T220 and the only resolution my Nvidia 9500 GT can use now is 1024x768? I used to have many more options but when I started my PC after the xmas break, this is what i come back to.

Per the suggestions above, I tried Nvidia Control Panel>Change Resolution>Customize, but “Customize” is not available to me? It is greyed out.

Any help would be great, I cant work like this…

Did you uncheck the box?

You have to uncheck “show only TV resolutions” to get the customize button to un-grey.

Not using a TV - I never saw that checkbox

I had to go to ‘Setup Multiple Screens’ then back to ‘Set Resolution’, then select 1024x768 native resolution.

Only then would Customize would light up.

I could then follow the instructions for a Custom resolution and Timing setup.

This has resolved the issue. Thanks!!

how do i change my native resolution

I need this to work! When I go to the NVidia only one option pops up! Please help!

This worked for me

Hey. I had the same problem. After doing online research, here’s what worked for me.

[Step 2] Manually download (do not use auto detect) AMD/Nvidia display driver from thier website and install. Done!

Mine is a different screen, although Nvidia made it easier. If there is a “size” tab go to there and there should be an option to manually change the screen size.
Green arrows show up and you stretch or shrink the screen to fit the corners. I didn’t know this existed until I messed with the settings

Are you sure it recognizes the new card?

If you go to Windows Setting, Display and click “display adapter properties”, is it showing your new video card? If it is still running off the integrated graphics, you may need to install the proper GPU device drivers or work with your system settings to use your new adapter.

My motherboard has no on board video card. It does not work at all without a dedicated card. Also tried changing cables and monitor is not recognized by the Device manager. It says genericnon-pnp monitor. Card is MSI GTX1050 2GB OC screen 27inch Benq GL2750HM. Help!

You sir are my hero!!! been struggling with this issue, and thank you for finding the solution

welcome my friend. Im glad i helped you to find a solution to your problem.