Android users: There’s a new app you may have heard about from your iOS-wielding friends: Instagram. Named App of the Year for 2011 by Apple, it's has been in the hands of millions of Apple mobile device users for a year and half. and finally it can be yours.

The free app, which only hit Google Play a few days ago has already garnered more than a million downloads. What’s with all the hype?

It Makes Boring Shots Not So Boring 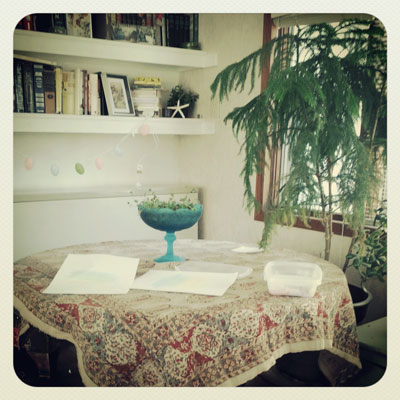 First, it lets you make any average photo look interesting. You can snap a photo using the app or choose one from your camera roll and apply one of 18 photographic filters that do things like make the image black and white or sepia as well as change coloring, contrast and brightness.

Take a look at this photo of my daughter’s art area, for example. Imagine this as a regular shot—not an impressive photo, right? Add the “Earlybird” filter and now I’ve got a sepia-toned image that looks like it was hand colored—not unlike what I used to do in my darkroom back in the pre-digital days. And, it’s framed up square-like just like an old Polaroid with a vintage frame to boot.

While this is fun and easy to play around with, there are plenty of good photo editing apps you can install on your phone. So, obviously, people like more than just Instagram’s filters.

It was a year ago when I first joined Instagram on my iPhone. After now signing in on my Galaxy Nexus, I see in that time I’ve somehow picked up more than 70 followers.

Because I’m really only interested in the photos of people I know (although you’re certainly welcome to follow celebrities or any other stranger), I checked my followers for friends or acquaintances and found only two. Then I asked the app to check my Facebook friends for Instagram users, which yielded a dozen or so. Next Instagram combed my contacts (with my permission) and found about 25 more people I know using the app.

Now whenever I open Instagram on my phone, I can see the images uploaded by those people, like them or comment on them—and the process of going social took all of about a minute.

It’s important to note that if you don’t want your photos viewable by anyone, you can change your settings to private so only you see them. Then, if you want to share with friends on Facebook, Twitter, Tumblr or Foursquare, you can with only one tap. 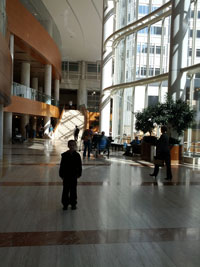 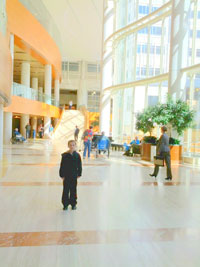 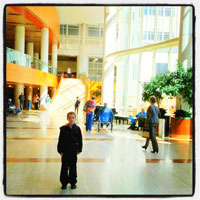 You should also know that in some cases it’s a good idea to edit a photo using your native Android camera app first, then move it over to Instagram. That’s because Android’s photo editing capabilities are quite good and (at least with Ice Cream Sandwhich like I’m using) it’s several notches better than Instagram’s.

I took this photo of my son a few weeks ago. You can see the bright background made my son a veritable shadow in the foreground.

To compensate, I used the “fill light” adjustment and saturation filter in the Android photo editor first. This lightened up my son’s face and body and allowed me to exaggerate colors in the photo. Then I saved a copy of the edited image and sent it over to Instagram using Android’s share feature.

Once in Instagram, I used the Lo-Fi filter to increase the contrast and bump up color saturation even more. The result is a much improved image. Used along with the optional vintage frame and I’m looking at a photo fit for the scrapbook.

Speaking of scrapbooking, if you want your beautiful Instagram images on paper you either need to export them from your phone using a USB connection or use a handy service like Instaport, which, if you give it permission to access your Instagram account, will let you download a .zip file of the last 10 photos you took, the photos you snapped between given dates, other people’s photos that you liked or photos tagged with a given word.

A couple of caveats. The Android version of Instagram isn’t exactly like its iOS counterpart. It’s missing the tilt shift feature which lets you focus on one area of the photo while distorting the rest of it.

And if you’re using it on a newer version of Android, you might find some bugs. I tested it on Android 4.0.2 and the app crashed several times, although I wouldn’t say that’s an experience I only have on Instagram. Other apps I’ve tested haven’t been quite ready for Ice Cream Sandwich.

In all, it’s a slick, easy-to-use app that makes taking photos a fun social experience.

I just saw on the news that Facebook just bought instagram? Is this true or did they already own it?????

Yes, it's true. They just

Ever since they were bought

Ever since they were bought out by Facebook they seem to be going downhill.